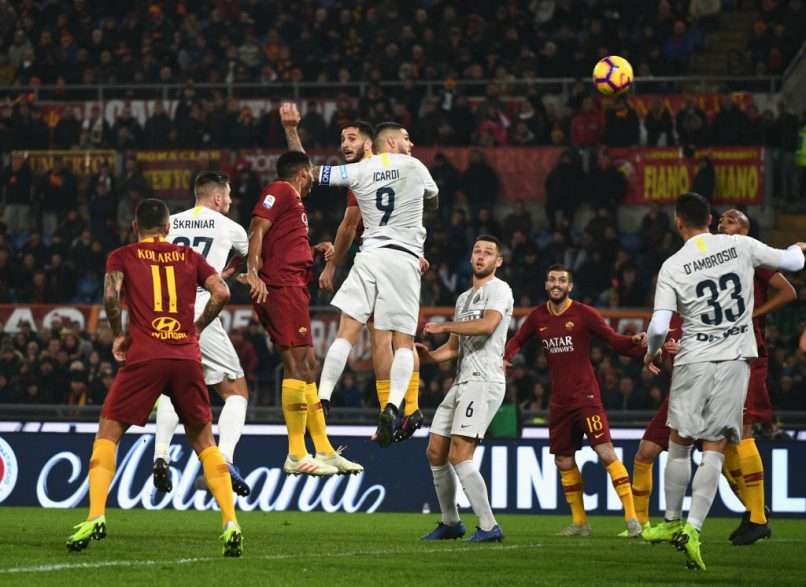 Roma battle back to deny Inter

Roma came from behind twice on Sunday night to earn a 2-2 draw against Inter Milan at the Stadio Olimpico. Luciano Spalletti was facing his former club following his unceremonious exit from the capital two years ago, but unlike last season where his side won 3-1 in Rome, Inter were forced to settle for a point on this occasion.

There were concerns for Roma heading into this game, none more so than the absence of Edin Dzeko due to injury. His replacement, Patrik Schick, set about filling the void, setting up a golden opportunity for Alessandro Florenzi, only for the Roma captain to fire his effort against the upright. Roma were on the front foot, claiming a penalty when Bryan Cristante went down in the area. His protests were waved away though, and Inter punished their opponents moments later. Danilo D’Ambrosio’s cross was met by Keita Balde, the former Lazio man volleying home to make it three goals in his last two appearances.

The home side needed to find a response, which they did in the opening minutes of the second half. With few other options available, Cengiz Under took aim from 25 yards out, his shot whistling past the motionless Samir Handanovic and into the bottom corner.

Roma were level, but their defensive frailties remain a problem, as exposed by Inter when they retook the lead. Mauro Icardi was left unmarked from a corner, ghosting into the area before heading the ball home. The simplest of goals that appeared set to hand Inter an impressive away win.

Yet there was still time for Roma to get back into the match, and they did just that. Marcelo Brozovic handled the ball away from the penalty area from a set-piece. Having initially allowed play to continue, the referee used VAR to reconsider his decision, eventually awarding the spot-kick. Aleksandar Kolarov stepped up and made no mistake.

A frustrating evening for Inter, who now find themselves eleven points behind the runaway leaders, Juventus. Roma are five points outside the top four, as their inconsistent start to the campaign rolls on.

Juventus continued their record start to a Serie A season, cruising to a 3-0 win away at Fiorentina on Saturday evening. Rodrigo Bentancur finished smartly to put the visitors in front, and despite some scares in the second half, goals from Giorgio Chiellini and Cristiano Ronaldo ensured that the champions moved onto 40 points after 14 matches.

Arkadiusz Milik was Napoli’s hero as they beat Atalanta 2-1 to move three points clear of Inter in second place. Fabian gave Napoli the perfect start, scoring inside two minutes, but it looked like Duvan Zapata had come back to haunt his former club when he drew Atalanta level after the interval. Coming off the bench, Milik ensured this was not the case, netting the winner five minutes from time.

AC Milan are up into the Champions League spots after recovering from a goal down to beat Parma 2-1. Roberto Inglese had given Parma the advantage, but an acrobatic effort from Patrick Cutrone levelled matters, with a Franck Kessie penalty completing the comeback.

Chievo held Lazio to a 1-1 draw in Verona, to make it three successive stalemates for the bottom club. Veteran striker, Sergio Pellissier, gave Chievo a shock lead after a fine run and pass from Valter Birsa. Lazio managed to avoid a humiliating defeat thanks to Ciro Immobile’s second-half strike.

Sampdoria won for the first time since early October, thrashing Bologna 4-1 on Saturday night. Fabio Quagliarella netted twice, whilst Dennis Praet and Gaston Ramriez also got onto the scoresheet. Bologna have not won since September, leaving them two points from safety.

SPAL and Empoli played out an entertaining 2-2 draw to lift both sides a point further clear of the bottom three. Jasmin Kurtic’s brace was cancelled out by goals from Francesco Caputo and Rade Krunic. SPAL are now three points above the drop zone, with Empoli a point behind their opponents.

Torino scored twice in first-half stoppage time to see off ten-man Genoa, 2-1. Romulo was given his marching orders inside the opening thirty minutes, but Genoa still went ahead shortly afterwards through Christian Kouame. The game was turned on its head within three minutes, as Cristian Ansaldi restored parity, and Andrea Belotti scored from the spot to move Torino into the top six.

Frosinone had to settle for a point as they drew 1-1 with Cagliari. Francesco Cassata finished off a well-worked move to hand Frosinone the lead, only for Cagliari to hit back, Diego Farias getting on the end of a fine Joao Pedro cross. Nicolo Barella was sent off in the closing minutes for Cagliari, but Frosinone were unable to force a winner, meaning that they remain second from the bottom, five points adrift of safety.

Udinese put in a resilient display to hold Sassuolo to a 0-0 stalemate on Sunday afternoon. Despite dominating possession, Sassuolo could not find the breakthrough. That result means that Davide Nicola has picked up four points from his first two matches in charge of Udinese, who have moved two points clear of the relegation zone in the process.

FEATURE | Mario Balotelli at Brescia: Why the homecoming has not gone to plan