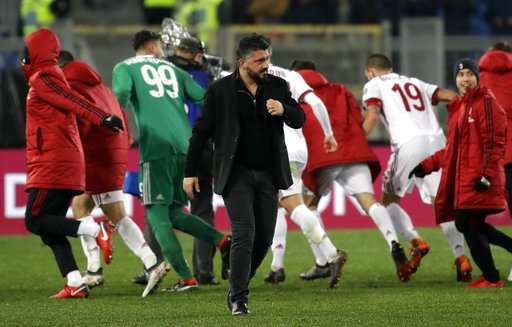 What on earth has Gennaro Gattuso done to turn Milan around this emphatically? It’s a legitimate question after they defeated Roma in the Italian capital by two goals from Patrick Cutrone and Davide Calabria. Two homegrown players scoring and excelling under Gattuso. Cutrone has been sensational in leading the line for Milan recently and Calabria has done really well at right-back and showed remarkable quality when finishing audaciously. Gattuso has improved the team tactically, especially in defense, but the main difference is the mentality. This team now believes they can beat anyone, and their performances suggest the same. Win the derby on Sunday and they are just four points behind Inter in fourth. Remarkable.

Roma then? Well, a good run of form was ruined by Gattuso’s rampant Rossoneri and there are already rumours of discontent in Rome with the coach Eusebio Di Francesco. Roma still have a very good chance of securing Champions League football, but they really need a big result to lift spirits. Napoli awaits on Saturday, and then the Champions League returns in two weeks. Those two games would make ideal for Roma to bounce back and go on a run.

Napoli opened a small gap against Juventus when beating Cagliari 5-0 in Sardinia to move four points ahead of the champions. Granted, Juve’s game against Atalanta was called off due to heavy snowing in Turin but it still gives them a bit of a boost. The performance was fantastic and the first half goals from Callejon and Mertens were added to by a brilliant team move finished by Hamsik, an Insigne penalty and a splendid Mario Rui free-kick. This makes it ten wins in a row. The Scudetto is edging closer.

Inter really are struggling at the moment and only defeated Benevento thanks to two second-half corners where Milan Skriniar and Andrea Ranocchia delivered in front of goal. They’re really not playing well, look short in confidence and miss the early season form of Icardi, Candreva, and Perisic. Going into the derby on Sunday, Inter are not favorites despite their position three places ahead of Milan. Lose and the gap will only be four points. Testing times for Spalletti.

Sampdoria continued their stability and excellent season when beating Udinese 2-1 in Genoa thanks to goals from Matias Silvestre and Duvan Zapata. A late own goal from Silvestre didn’t mean anything other than the end of Emiliano Viviano’s clean sheet for the day. It’s an excellent campaign for coach Marco Giampaolo and Samp are actually just seven points behind Inter in fourth.

Lazio are still the highest scorers of the Serie A after easily beating Sassuolo 3-0 in Reggio Emilia. Sergej Milinkovic-Savic was once again the stand-out player with two goals, who showcased all of his ability when at his best. He’s still not consistent from game to game or even throughout a game but his best performances are hard to better for any midfielder in Europe. In between his strikes, Ciro Immobile scored again. That’s 23 in the league for him now, five ahead of Icardi in second. Oh, remember he’s joint first in assists too, with eight. What a season he’s having.

The most important game of the week was played in Calabria as Crotone hosted SPAL in a massive game around the relegation zone. SPAL in 18th were four points behind Crotone in 17th ahead of the game but reduced the gap to a single point after an impressive away win. Mirko Antenucci opened the scoring for the visitors but Ante Budimir leveled the score just after the break. Lorenco Simic then again put SPAL in the lead and they didn’t surrender it, especially after Alberto Paloschi made it 3-1. Budimir did pull one back with five minutes to go, but SPAL held on and earned a crucial win. This result has created a real relegation battle with just six points separating Hellas in 19th and Cagliari in 14th. The teams in-between, SPAL, Crotone, Sassuolo and Chievo, all have to fight to the end of the season now to make sure they stay up.

Fiorentina took a win at home against Chievo thanks to Cristiano Biraghi’s stunner. Fiorentina have often looked good in big games under Stefano Pioli, at least playing-wise if not in terms of results, but they need to pick up more points in games like these. Therefore, the win was welcomed for a side that should be higher than tenth in the table, but it’s really tight between those sides below the very top so if you don’t gain results you risk dropping down the table.

One loss under Walter Mazzarri quickly became two for Torino who followed last week’s derby loss to Juventus by losing 2-1 in Verona against Hellas. Mattia Valoti scored twice for Hellas while Mbaye Niang got Toro’s goal. Huge win for Hellas who are just two points behind Crotone in 17th now.

Bologna made sure of their top-flight status when they won at home to Genoa. Mattia Destro and Cesar Falletti got the goals for Bologna who are 12th which is probably fair for their quality and their performances this season. Genoa should also be safe as they are ten points above SPAL in 18th, but one or two more wins should definitely be enough.

I’m running out of words to describe the Serbian. He’s simply fantastic and a truly unique player. His two goals against Sassuolo illustrate this point since the first was a wonderful curler into the far corner while the second was a header where he held off his marker. Sky’s the limit for this kid.

Semplici masterminded the huge away win at Crotone to give his side a decent chance of staying up. They’re one point behind Crotone over the relegation zone but they have momentum on their side.

The striker picked the ball up just outside his own penalty area, ran the length of the pitch with the ball before finishing over Albano Bizzarri in Udinese’s goal. Granted, it looks like the finish is meant to be a cross, but we’ll never know and the goal was still majestic.