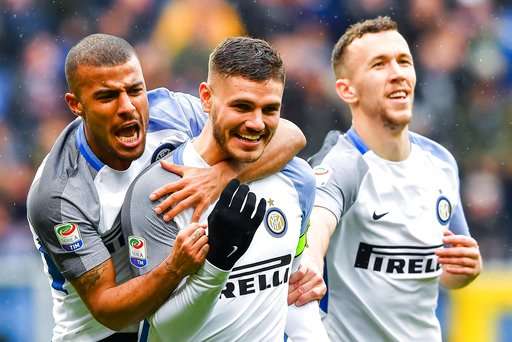 The title race took another twist when SPAL surprisingly managed to draw 0-0 with Juventus on Saturday night. That result gave Napoli a huge boost but it proved tough to break down a stern Genoa side on Sunday night. Maurizio Sarri’s men had to wait until the 72nd minute for the deadlock to be broken when Raul Albiol rose highest at the near post and glanced the ball into the net. We’re at that stage of the title race now when even the unlikeliest sources step up to find a way to win games and Albiol’s goal took Napoli to within two points of Juventus.

This means Napoli now, again, have it all in their hands. Since they play Juventus in Turin on the 22nd of April, winning all their remaining nine matches would secure a first Scudetto since 1990. Napoli also have the benefit of no European games and are also out of the Coppa Italia. On the other hand, they lack the experience of Juve’s serial winners and Max Allegri has shown in the past that he can handle a title race and a Champions League run at the same time. Despite the SPAL setback, Juventus, therefore, has to remain favourites for a seventh consecutive Scudetto. But it will be exciting and tight right to the wire.

Inter produced a stunning win at Sampdoria, 5-0 to the Nerazzurri after four goals from Mauro Icardi. Two of them, a backheel and a bouncing effort, were stunning. It was welcomed for Inter after a couple of months of poor performances and boring football. For Samp, however, this was another catastrophic weekend. After the lost 4-1 at Crotone last week, a superb campaign is now in danger of becoming an implosion for Samp.

Milan came from behind to beat Chievo 3-2 when Andre Silva once again scored the game-winner late on. Chievo had turned the game around themselves after going 1-0 down. Roberto Inglese’s strike to put Chievo 2-1 up was particularly exquisite. But the Rossoneri came back strongly and continue to chase the Roman clubs and Inter in the chase for the Champions League.

Fiorentina continued their fine form lately by beating Torino 2-1 in dramatic fashion. After Jordan Veretout had put Fiorentina ahead, Andrea Belotti equalized from an Adem Ljajic pass. But in stoppage time, Cyril Thereau won the game from the penalty spot to inflict a fourth successive defeat on Walter Mazzarri’s Torino.

Roma traveled to Crotone strengthened by their progress into the Champions League quarter-finals and continued their strong form by winning 2-0 at the Pitagorici who dropped into the relegation zone. Stephan El Shaarawy and Radja Nainggolan got the goals for the Giallorossi.

Lazio went behind at home to Bologna when Simone Verdi capitalized on a rebound, but Lucas Leiva scored for the second game in a row to earn Lazio a point. They dropped into fifth though and could be four points behind Inter if the Nerazzurri win their game in hand. It would be cruel if their stunning campaign didn’t bring Champions League football next season, but they need to go on a run now to secure at least fourth place.

Josip Ilicic was the main man in Verona at the weekend after scoring a brilliant hat-trick for Atalanta against Hellas. Atalanta won 5-0 with Ilicic scoring a penalty and two stunning left-footed strikes in between Bryan Cristante’s opener and the final goal from Papu Gomez. The Slovenian was truly fantastic and has had a very good season for Gasperini’s men.

The most dramatic game of the weekend was Cagliari’s late turnaround at Benevento. The home side went ahead through Enrico Brignola but Cagliari rallied and Leonardo Pavoletti leveled the scoring in the 91st minute but Nicolo Barella would have another say when scoring a 96th-minute penalty to give Cagliari a vital win in their quest for survival. For Benevento, it was surely the last nail in the coffin.

It’s hard to overlook a player who scores four in a tough away game as Icardi did at Sampdoria. The fact it was against his former side only made it better for Icardi.

Semplici have overturned a run of poor form to temporarily at least lift SPAL out of the relegation zone. This week, their impressive 0-0 draw with Juve was a testament to the quality of Semplici’s coaching.

There was strong competition this week. Icardi had two great goals, Ilicic also had two stunning strikes and there were others, but I choose Fofana’s brilliant curled effort for Udinese. It was truly special.