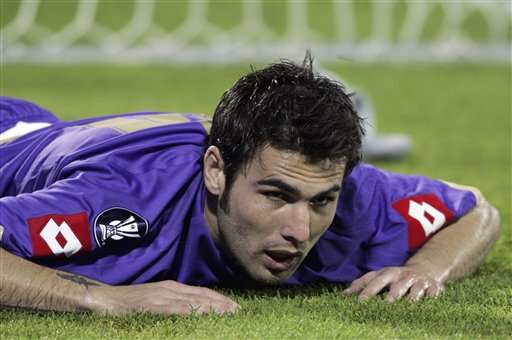 There have been many players who failed to live up to their potential. For various reasons, including struggling to cope with fame, a poor attitude or simply being unlucky through injuries and poor timing, many highly talented youngsters fail to become their players they seem destined to be. Adrian Mutu was one such player.

Highly skillful and with lots of quality on the pitch, he had as many problems off it. Drugs, women and a questionable attitude were all reasons why this Romanian rock-star never became the player everyone anticipated. Still, he remains one of Romania’s greatest ever players and starred in the Serie A for a decade, providing goals, skills and memories fans will never forget.

Mutu started his professional career at Argeș Pitești, his hometown club, where he came through the ranks and made his debut as an 18-year-old in 1997. He would go on to play a total of 47 matches for the club, and scored 14 goals before one of Romania’s biggest clubs, Dinamo București, came calling. The then 20-year-old Mutu joined Dinamo midway through the 1998/99 season, and made 17 appearances, scoring four goals for the club before the summer. It was the following campaign, however, that would kick-start his career and show why he was Romania’s biggest talent. In the first 18 league matches, Mutu scored 18 goals and in all competitions had scored an exceptional 25 goals in 24 matches after only half a season. This remarkable form meant he was on the move again, but this time he would leave the capital and the country as Italian giants Inter secured his services. Mutu’s goals and overall performances meant Dinamo would go on to secure the Romanian league title, although the architect of the success wouldn’t be around to lift the trophy.

Mutu’s time at Inter can largely be forgotten about. As stated above, he joined midway through the season and only made ten Serie A appearances without scoring. The only positive memory would be his debut in the Coppa Italia, where he came off the bench to score against AC Milan within nine minutes of his arrival on the pitch.

Instead, he joined Hellas Verona on a co-ownership deal for the 2000/01 season. At Hellas, Mutu would join up with Alberto Gilardino, the first of three clubs they played together at. His first season was also a bit of a failure as he only managed four league goals in 25 appearances. It seemed that the Romanian wonderkid couldn’t quite make it in Europe’s best league. The following season would prove all this to be wrong though, as Verona bought the forward outright in the summer of 2001 and going into the new season, Mutu was given an integral role in the team. Mutu hit the ground running and ended up with 12 league goals, but Verona was still relegated to Serie B.

Mutu’s form had earned him another move though, as he joined Parma for the 2002/03 season. Under the guidance of Cesare Prandelli and paired with the lethal Brazilian Adriano up front, Mutu produced an outstanding campaign. His partnership with Adriano proved deadly, as the pair scored 32 goals between them. Mutu netted 18 of those, and his reputation as one of the brightest talents in Europe was back.

Mutu’s performances meant Claudio Ranieri’s Chelsea, newly rich after being purchased by Roman Abramovich, made their interest known. They paid £15.8 million to Parma for the attacker who was expected to bring his trickery and goal scoring to England and the Premier League. Mutu started brilliantly too, scoring four times in his opening three matches including a brace in a 4-2 derby win over Tottenham. However, as the season wore on, Mutu faded, ending up with only six league goals in 25 appearances. At the end of the season, Ranieri was replaced with Jose Mourinho, and Mutu’s slack attitude would predictably clash with Mourinho and things came to a head in October 2004.

Mutu wasn’t a regular fixture in Mourinho’s eleven, frequently missed training and on a trip back to Romania he was involved in a car chase with Romanian police in September 2004 after failing to stop for speeding. He behaved erratically and suffered from mood swings, which prompted Chelsea to order him to take a drug test. The test came back positive for cocaine. Mutu said he turned to the drug, as he was depressed following his divorce from his wife and the fact he wasn’t a regular in the team. Chelsea didn’t think twice and sacked Mutu over breach of contract and he was suspended for seven months by the FA and received a fine of £20,000. A long financial dispute has followed since, and Mutu has been ordered to pay Chelsea 17 million euros in damages. This money still hasn’t been paid, as the case has been appealed in so many different courts that it’s been hard to keep up.

Football wise, Mutu signed for Juventus in January 2005, despite still being banned from football. As Juve didn’t have room to sign a non-EU player from abroad, Livorno signed Mutu on a free transfer before selling him to Juve in a very contemporaneous deal. Mutu still couldn’t play until May 18th when the ban ended, but for Italy’s biggest club to sign him showed the regard he was still held in back in Italy. On May 29th, with the ban lifted, Mutu made his Juventus debut in the last game of the season against Cagliari.

The following campaign saw Mutu score 11 goals in 45 appearances in all competitions, as he was part of a brilliant attacking setup including Alessandro Del Piero, David Trezeguet, and Zlatan Ibrahimovic. It was a decent return after such a long spell out and Juventus won the Scudetto. However, following the Calciopoli scandal, Juve was stripped of the title and many players decided to leave the club after its relegation to Serie B. Mutu was one of these players. He decided to join Fiorentina, and over the following four seasons, we would witness the best football of his career.

Upon his arrival, Mutu was reunited with Prandelli, who made Mutu a key man in his side, partnering him up front with Luca Toni, and a lethal partnership was formed. The pair scored 32 goals between them, and “Il Calcio” named Mutu Footballer of the Year thanks to his performances that brought 16 goals and eight assists in 33 appearances as Fiorentina secured UEFA Cup football.

Ahead of the 2007/08 season, Toni left Fiorentina, leaving Mutu to form a new partnership, this time with Giampaolo Pazzini. Mutu enjoyed another outstanding campaign and was Fiorentina’s top goal-scorer both in the league (17) and in all competitions (23). His goals brought Champions League football to Florence and the Artemio Franchi and the following season saw him get a new partner again, with former Verona and Parma teammate Alberto Gilardino joining Mutu up front. Together, they struck 33 goals and guided Fiorentina to fourth again and Champions League football again. The season also saw Mutu’s first Fiorentina hat trick, as he earned Fiorentina a point against Genoa after going 3-0 down. Mutu scored a penalty, a free kick and a stoppage-time equalizer in a remarkable individual display.

The following season would see Mutu’s off-field issues make a return. In January 2010, he failed a doping test and was banned for nine months. Upon his return, Fiorentina soon banned him for a month for breach of contract. Mutu later apologized and was reinstated in the team, but failed to reach previous heights after his long absence. In June 2011, Mutu left Florence and joined Cesena, where he stayed for a season, which brought eight Serie A goals. He then moved to Ajaccio in Ligue 1, where he impressed and scored 11 goals for the club, before a disappointing second season only saw him feature nine times, with no goals scored.

He then played for Petrolul Ploiesti in Romania, Pune City in the Indian Super League and ASA Targu Mures back in Romania before retiring in the summer of 2016.

On the international level, Mutu was always a regular goal-scorer. For example, he scored six goals in the Euro 2008 qualifying campaign to take his country to their first major tournament since Euro 2000, where he also featured. At the finals in 2008, he scored Romania’s only goal, ironically against Italy, but also missed a crucial penalty in the same game, which meant Italy advanced in Romania’s place. Had Gianluigi Buffon not saved it, Mutu would reign alone as Romania’s greatest goal-scorer. In his 77 matches for the national team, he scored 35 goals, equaling national icon Gheorghe Hagi’s record. Hagi scored his 35 in 125 appearances though, so Mutu scored the same number despite playing 48 matches fewer than Romania’s greatest player ever. This further highlights the outstanding quality Mutu always had, but there will always be a feeling of regret in regards to his career, as it really does seems like so much had been wasted.

On the pitch, Adrian Mutu had everything a modern attacker needs. He was quick and explosive, highly skillful and a great dribbler, boasted excellent technique and first touch and he was an exceptional finisher with either foot. He was often compared to Hagi due to his style and usually excelled playing in a free role behind a pure number 9 such as Toni, Pazzini or Gilardino. He also scored regularly from set pieces, both free kicks and penalties. He was a truly brilliant footballer.

The problem was his attitude. Mutu was often criticized for his lack of work rate, his temperament which could cause problems on the field and he could drift out of games and be inconsistent. For those first three seasons at Fiorentina he was one of Europe’s, never mind Italy’s, best attackers but for every goal scored there are stories of controversy such as drinking before games or breaking a waiter’s nose. And of course, the two bans for drug use.

Without them, especially the second one, there’s no telling to what he might have gone on to achieve, but a poor attitude and professionalism let the Romanian maverick down. Now he will be remembered as a player that failed to live up to his potential, but we should also remember all the things he still achieved. In Florence and back home in Romania, he will always be a hero, and despite all his issues off the pitch, Adrian Mutu was one of Romania’s greatest ever players. Maybe, just maybe though, he should have been more.