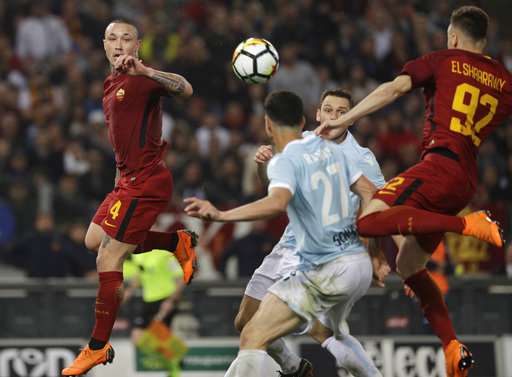 The derby in Rome is always special. Coming at the end of a week where Roma completed an incredible comeback to knock Barcelona out of the Champions League while Lazio imploded and conceded four goals in Salzburg to get knocked out of Europa League quarter-finals. It was contrasting fortunes, to say the least going into the game and it told in the way the two sides approached the game.

Roma were clearly on top and dominated large spells thanks to superb pressing which forced Lazio to play more long balls than they would have liked. Both sides created good chances with Bruno Peres and Edin Dzeko hitting the post for Roma while Luis Alberto and Ciro Immobile had good chances on the other end. But it would end goalless. The 0-0 draw didn’t suit either side given Inter’s draw the night before, but it keeps the two Roman clubs in 3rd and 4th. Both sides are a point ahead of Inter in fifth which means we have a great race for the Champions League places. It’s impossible to guess which two will come out on top.

Inter had a chance to leapfrog both sides but could only muster a draw in Bergamo against a strong Atalanta. The game finished 0-0 after Samir Handanovic was forced to make a series of good saves in the Inter goal. Inter have had chances to capitalize on the Roman sides dropping points recently but have three games without a win now and they’ve failed to score in each. Can the inconsistency be their downfall?

Juventus dismantled Sampdoria in Turin after a superb cameo from Douglas Costa who assisted the three goals scored by Mario Mandzukic, Benedikt Höwedes and Sami Khedira. Juve went six points clear of Napoli at the top and the two sides meet on Sunday. If the gap stays at six also after the midweek games then Juve can basically clinch the title in Turin.

Napoli should have beaten Milan, but Gianluigi Donnarumma made a great save to stop Arek Milik from winning it for the Partenopei. 0-0 in Milan isn’t a poor result as such, but as Juve keeps winning Napoli really has to beat Juventus in Turin on Sunday.

Before that game though, Napoli play Udinese in Naples on Wednesday and they will be facing the worst team in Italy at the moment after Udinese lost 2-1 at Cagliari which was their ninth loss in succession. They haven’t won in ten and given they’re form they are really in danger of the relegation zone. They’re six points above Crotone in 18th but they have the worst form in the league. Against Cagliari, they went a goal up when Kevin Lasagna scored, but goals from Leonardo Pavoletti and Luca Ceppitelli gave the Sardinians a vital win.

Chievo managed to get a draw at home to Torino but they should also be a bit worried given they’re only three points above Crotone in the drop zone and two ahead of SPAL in 17th. To make matters more interesting, Chievo go to SPAL tomorrow night in a HUGE game at the bottom.

Crotone lost away at Genoa when Daniel Bessa scored and inflicted more worries on Crotone when they had a good chance to climb out of the relegation zone. They play Juve on Wednesday and then go to Udine at the weekend when it’s likely Udinese will have lost their tenth in a row. Talk about an important game.

Sassuolo are also in the battle down there and are enjoying a strong run of form from Matteo Politano to continue to earn them points. Against Benevento, Politano and Benevento striker Cheick Diabate had a shoot-out which saw both score two goals each and the game finish 2-2. They both scored stunning chips as well to bring more gloss to their performances.

Fiorentina had won every game since Davide Astori’s tragic passing but SPAL earned an impressive draw in Florence in a 0-0 stalemate. SPAL are very consistent and rarely makes a bad performance and will be confident they can stay up.

Hellas Verona lost away at Bologna and that could prove disastrous when so many rivals lost points above them. Simone Verdi opened the scoring and in stoppage time Adam Nagy clinched a 2-0 win for Bologna but in truth, they battered Hellas and really impressed.

Politano is in great form and scored two against Benevento to earn Sassuolo another point after also scoring at Milan last week. He won’t play in green and black next season.

SPAL are so consistent and look extremely well-coached by Semplici. After their draw at Fiorentina at the weekend, SPAL have seven games without a loss and have even drawn against Juve in that run. The only problem is that they seem to draw too much and they still are only a point above the drop zone. If they can muster some wins they should be safe.

Diabate is in great form and scored twice against Juventus and continued with two this weekend. The pick of the bunch was the first when he was played through with a back-heel before chipping the goalkeeper.