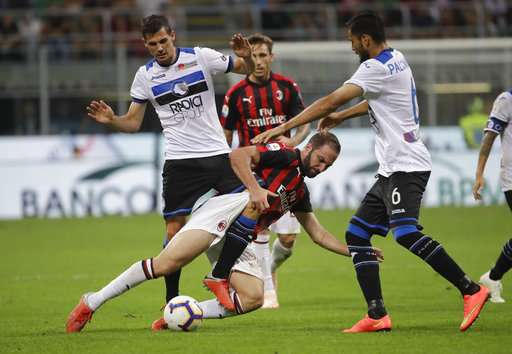 After faltering starts to the season, Milan and Atalanta faced one another in Sunday’s early evening encounter. Atalanta came into the game off the back of successive league defeats, whilst Milan had just one win from their opening three fixtures. Both had a point to prove.

Milan seemed intent on making theirs from the off, and they took the lead within 90 seconds. Suso gathered the ball on the right wing and clipped a delightful ball into the stride of Gonzalo Higuain, who struck a sweet volley on the turn into the far corner. A simple yet perfectly executed move, resulting in Higuain scoring his third goal of the week. The Argentine has hit the ground running at his new club and looks sharper and fitter after a relatively disappointing campaign last year at Juventus.

The Rossoneri continued to control proceedings as the half wore on. They were having plenty of success down the right flank, with Suso enjoying his best game of the season thus far, whilst Giacomo Bonaventura also shone with some excellently timed runs into the box. The diminutive Italian was very unfortunate not to double Milan’s lead on two occasions; firstly having a header ruled out via a VAR review for being marginally offside, before being denied by the foot of the post shortly before the break. As the half-time whistle sounded, there was no doubt that this game could have already been put to bed.

Gian Piero Gasperini reacted to his side’s lacklustre first-half display by making a double change at the break. Duvan Zapata and Emiliano Rigoni replaced the ineffective Musa Barrow and Mario Pasalic as Atalanta went in search of an equaliser. The attacking duo were involved from the outset, and within 10 minutes of the break, parity was restored. Zapata had already seen a fierce drive beaten away by Gianluigi Donnarumma, but Milan did not heed the warning signs and were punished moments later as Zapata’s cross was touched home at the near post by Alejandro Gomez.

Stunned by the response of Gasperini’s men in the early stages of the second half, Milan needed to regain their composure. They did just that and found themselves in front once more shortly after the hour mark. As in the first half, Suso was the provider, delivering a cross for Bonaventura to delicately flick into the net past Pierluigi Gollini. It was no more than Bonaventura deserved, and the home team looked to be on course for consecutive home victories.

Arguably the turning point in the game came in the 74th minute, as Gennaro Gattuso opted to replace Bonaventura with Tiemoue Bakayoko. The change appeared a negative one, and having flourished throughout, it was easy to understand Bonaventura’s frustration at the decision. Milan’s mentality altered as they failed to make the most of counter-attacking opportunities, seemingly content with getting through the final minutes to claim a well-earned win.

This approach proved naïve as Atalanta pegged them back for the second time in the first minute of injury time. The two half-time substitutes were at the thick of the action, with Zapata’s volley being pushed out into the path of Rigoni who tapped home into the unguarded net. Milan will feel hard done by after dominating much of the match, but relief will be the overwhelming emotion for Atalanta, who earn their first point of September.

Italy’s biggest summer spenders, Juventus and Inter, both left it late in securing victories this weekend. Juventus travelled to struggling Frosinone, who were seeking redemption after a humiliating 5-0 loss at the hands of Sampdoria last week. The home team showed very little ambition, but defended resolutely and were grateful for some poor finishing from Cristiano Ronaldo. The five-time Ballon d’Or winner made amends in the 81st minute though, as he pounced on a loose ball in the area to scuff the ball into the corner of the net, ending Frosinone’s stubborn resistance in the process. Federico Bernardeschi added a second in added time as Juventus ran out 2-0 winners.

Inter were taken right to the wire, as they faced an in-form Sampdoria in Genoa. The visitors edged most of the game, with Mauro Icardi missing the target with a couple of headed chances in the second half. Their persistence was finally rewarded deep into injury time, as Marcelo Brozovic controlled and volleyed home from inside the area to spark wild celebrations on the touchline. Two last-gasp winners in the space of four days have turned things around for the Nerrazurri, who seem to be finding their feet after a desperately poor start to the season.

Lazio produced their most impressive performance of the season thus far as they dispatched Genoa 4-1. Ciro Immobile bagged a brace, whilst Felipe Caicedo and Sergej Milinkovic-Savic added further goals to move the side up to fifth in the table. Yet things go from bad to worse across the city, as Roma were beaten 2-0 by Bologna. Coming into this game, Bologna had failed to score in their previous four league fixtures, but they were too strong for their counterparts from the capital on Sunday afternoon. Roma have now gone four games without a win, dating back to the opening game of the season, with pressure now increasingly mounting on Eusebio Di Francesco.

Napoli banished memories of their previous away game against mid-table opposition as they cruised past Torino 3-1. Last year’s runners-up were comprehensively beaten 3-0 when they were last on the road against Sampdoria but were aided by a Lorenzo Insigne brace this time.

Fiorentina returned to winning ways, beating high-flying SPAL 3-0 at home. Having claimed just one point from their last two games, albeit in tricky away games at Napoli and Sampdoria, the hosts responded positively, putting this game out of reach within an hour. Federico Chiesa sealed the victory as he netted the Viola’s third.

Sassuolo bounced back from their first defeat of the season last weekend as they came from behind to beat Empoli 3-1. The Neroverdi got off to the worst possible start, falling behind in the first minute, but responded emphatically with three summer signings; Kevin-Prince Boateng, Gianmarco Ferrari, and Federico Di Francesco finding the net.

Parma made it back-to-back league wins, defeating Cagliari 2-0 in a game that contained the goal of the weekend. After Roberto Inglese somewhat fortuitously put the side in front midway through the first half, former Arsenal and Roma winger Gervinho stole the show with a mesmerising dribble from deep inside his own half, culminating in a clinical finish.

Chievo’s woes are far from over as they were on the wrong end of a 2-0 scoreline at home to Udinese. In an evenly-contested match-up, Udinese took the lead through Rodrigo De Paul in the 76th minute, and Kevin Lasagna rounded off the scoring late on. Chievo remains on -1 points following their recent points deduction, and are already five points from safety.