Atalanta | The Shining Light of Italy 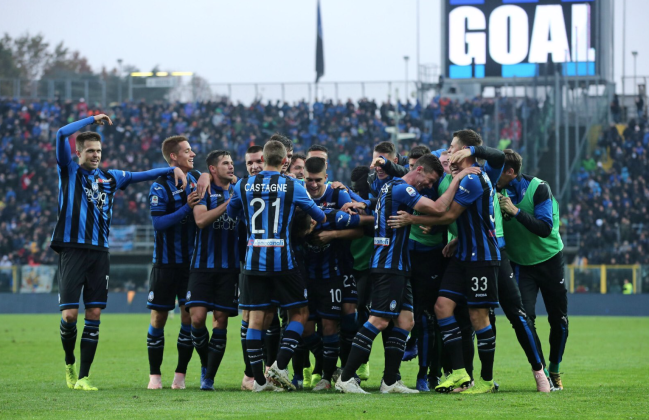 It has been a dark year for Italian football. Multiple disgusting incidents surrounding racism, off the field controversy, teams underperforming domestically and not showing up in European competitions have resulted in an overwhelming negative feeling amongst Italian football fans this season. Even Juventus only managed a handful of genuinely good performances on the way to their 8th Scudetto in succession, whilst a club like Fiorentina head into the last match of the season in serious danger of plummeting out the division. There has been one shining light in Italian football, however. Atalanta Bergamasca Calcio.

Atalanta have risen above the behaviour of fellow Italian clubs and have been the much-needed positive story for all who follow Italian football. Their fans are currently watching arguably their best ever team, enjoying their greatest ever season. Obviously, this could and should be made even sweeter if they manage to overcome a Sassuolo side they destroyed 6-2 away from home earlier in the season, helping them to grab a much-coveted spot in the top four. Atalanta are adored by neutral fans due to their style of football. They share Jürgen Klopp’s philosophies of overrunning their opposition through superior fitness and hard work, whilst playing attacking football which is easy on the eye with a dynamic front three. This is a rarity in Serie A and a breath of fresh air in a league, which at times this season has flattered to deceive.

Atalanta have nothing to lose compared to their Champions League chasing rivals Roma, Inter and AC Milan; who are fighting to stay within the boundaries of FFP if they fail to qualify. If Atalanta do finish 5th or lower it can be seen as simply a hard luck story. If any of the other teams lose out, then they may have to sell out their biggest assets in order to stay within the boundaries of the law. Atalanta are simply pleased to be in their situation and have no pressure of missing out defining their club’s future.

Of course, Ilicic is rumoured to be leaving for Napoli, which would be a huge blow and potentially not the wisest deal for both clubs. But this is not the end of the world for Atalanta. Their model is to sell for a profit and use their fantastic development system and scouting networks to bring through the next gems for Gasperini to play with and mould into his flawless system.

For Atalanta, players can come and go. But what is crucial is that they keep hold of Gian Piero Gasperini. He is their most important asset as his personality and leadership stands out in this current team for all to see. They play aesthetically pleasing football, partly due to the bravery Gasperini has to play three forwards. This bravery is combined with his ability to make his players run into the ground for him. The effectiveness of his attacking play is shown in Atalanta currently scoring the most goals in the competition (74). If you consider the attacking talent that other clubs such as Juventus and Napoli have amongst their squad, this is a clear sign that Gasperini is bringing the best out of his players. Leading the line is Duvan Zapata, who is the second-leading goal scorer in Serie A, with 22 goals. This doubles his previous highest scoring domestic season, where he scored 11 goals last year with Sampdoria.

The sign of a good manager is to make players bleed for your team and play with blind confidence that the managers tactics will provide success. This is another connection Gasperini has with Jürgen Klopp. Klopp makes seemingly average players look like world beaters. Wijnaldum, for example, got relegated with Newcastle and looked like merely a decent player, but now you would be hard pushed to find someone who could do as good of a job for the German manager’s team.

Ilicic is a clear example Gasperini’s influence on a player. At 21 years of age, the talented but inconsistent forward, was thinking about retiring due to the lack of enjoyment when playing football. Now, he is arguably one of the top 3 forwards in Italy due to the unbelievable consistency he is showcasing on the pitch, producing huge goals when it matters. Last week at Juventus was a sign of this as he looked the best player on the pitch. Gasperini is the driving force behind Ilicic being the player he is today, and another reason why the Slovenian should reconsider leaving Atalanta this summer.

If there was one slight cloud over the weekend’s match against Sassuolo, it would be that Atalanta have to play their final game away from their home stadium despite being the home side. They are redeveloping their stadium in order to become a more modern club, which will stabilise their future. They will be creating a stand behind the goal which is similar to Borussia Dortmund’s “yellow wall”, operating with a safe standing stand in order to retain their electric atmosphere. Although this is an inconvenience (especially for the fans as it is a 2-hour drive away from Bergamo), it is part of the clear signs that Atalanta is a club moving forward and showing the correct ambition to become a future powerhouse in Italy.

Atalanta represent something which is rare in football in modern times. They are achieving success based on hard work and determination. Football fans across the world want their team to represent who they are. Football is a working-class sport. Stadiums are filled with normal people who all work hard throughout the week in order to watch their beloved team play. This is why it is so special when a team such as Atalanta, who were in the second division just over a decade ago, play with such passion and heart, representing their fan base, whilst achieving great feats on the pitch.

The footballing world should stand up, pay attention and aim to replicate the successes of Gasperini’s men this season. They represent all that is good about the game and stand against all the controversy which is currently surrounding not just Italy, but football as a whole right now.

Max Allegri on Juventus points deduction: “As if...