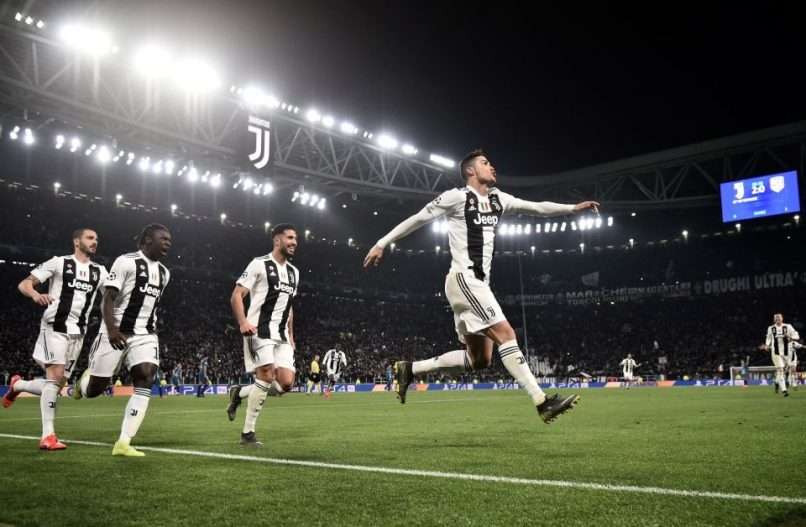 Cristiano Ronaldo scored his first hat-trick for Juventus to help his side to a 3-0 win over Atletico Madrid, overturning a 2-0 first leg deficit to move into the last eight of the Champions League on Tuesday evening. After a disastrous away performance in Madrid last month, the Italian champions produced a breath-taking performance to ensure that their dream of securing a first European Cup in 23 years lives on.

Juventus manager Massimiliano Allegri was heavily criticised for his tactics in the first leg, but opted for an attacking looking outfit here, starting the in-form Emre Can and Federico Bernardeschi ahead of Rodrigo Bentancur and Paulo Dybala. From the outset, Juventus were on the front foot. They nearly got their first goal inside the first five minutes, but Giorgio Chiellini’s effort was ruled out following Ronaldo’s collision with goalkeeper Jan Oblak.

Not quite the early goal that Juventus were hoping for, but at least they had the crowd fully behind them on this occasion. During Friday night’s victory over Udinese there were angry protests from the Curva Sud over ticket prices, yet there were no such issues here. Instead, the Juventus supporters were creating a hostile environment for the Atletico players, and that only increased when Juventus went ahead in the 27th minute. Bernardeschi’s teasing cross begged to be attacked; Ronaldo did just that as he powered above Juanfran to head home.

The goal had been coming, and now all the momentum was with Juventus. Atletico did give a brief warning of their attacking threat when Alvaro Morata was found in the box, but the Spanish striker could only steer his header harmlessly over the bar.

Shortly before the restart, the cameras showed Ronaldo in the tunnel. The striker was seen firing up all of his teammates, demanding that they built on their first half display and finished the job after the break. He looked like a man that refused to be denied, and that was exactly the case in the 49th minute when he levelled the tie. Moving away from goal, Ronaldo met Joao Cancelo’s cross, yet his header appeared to have been kept out by the sprawling Oblak. However, the referee was quick to point to his watch, indicating that the ball had crossed the line by the smallest of margins, cueing wild celebrations from the home side.

With the tie now in the balance, attention turned to how each manager would react in the closing stages. Often thought of as a conservative manager, Allegri went for an offensive-minded change, bringing on Dybala to replace the tiring Leonardo Spinazzola and reshuffling his defence in the process. His boldness paid off as Juventus completed their comeback with four minutes remaining. Bernardeschi drove into the penalty area and was shoved from behind by Angel Correa, leaving the referee with no option but to point to the spot. Ronaldo stepped up to send Oblak the wrong way and cap a fine night for himself and Juventus.

The draw for the quarter-finals takes place on Friday. Following this showing, no side will be keen to face Juventus next.

Inter Milan were knocked out of the Europa League on Thursday after suffering a 1-0 loss at home to Eintracht Frankfurt. Having battled to a goalless draw in the first leg last week, it seemed that Inter were slight favourites to progress, but without the suspended Lautaro Martinez and Kwadwo Asamoah, whilst Marcelo Brozovic could only make the bench, the hosts produced a lacklustre display. Luka Jovic scored the only goal of the game, and Inter will have to regroup quickly ahead of the Milan derby on Sunday.

Napoli progressed to the quarter-finals of the Europa League despite suffering a 3-1 defeat to Red Bull Salzburg. Entering the second leg, Napoli held a 3-0 advantage and scored a precious away goal through an Arkadiusz Milik volley to go in front. Salzburg swiftly responded through Moanes Dabour, with Fredrik Gulbrandsen and Christoph Leitgeb adding goals after the break to hand the Austrian club victory on the night. However, it was not enough, as Napoli went through 4-3 on aggregate.