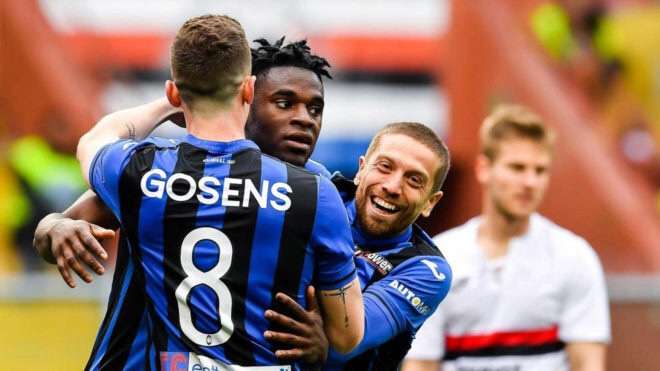 Atalanta see off Sampdoria to remain in the top four race

Atalanta secured back-to-back wins to stay in touch with their rivals for a European spot, edging past Sampdoria 2-1 in Genoa on Sunday afternoon. After consecutive defeats to AC Milan and Torino last month, it looked as though their challenge was faltering, but wins over Fiorentina and Sampdoria over the past week have resurrected their hopes.

Robin Gosens proved the match-winner, netting for the second game on the trot to repay Gian Piero Gasperini’s faith in him, having only recently returned to the starting line-up for the side from Bergamo. This was after Duvan Zapata had scored against his former club, only to see his goal get cancelled out by Fabio Quagliarella’s penalty, his 20th league goal of the campaign.

The first half was intriguing rather than enthralling. Both sides are generally seen as positive, attacking teams with vulnerabilities at the back, but chances were at a premium before the break. The best chance fell to Sampdoria, with Karol Linetty stabbing his shot straight at Pierluigi Gollini after good build-up play from the home side.

After 45 minutes of pretty passing but little end product, Atalanta clicked into gear at the start of the second half. Josip Ilicic was played through after fine work by Alejandro Gomez, with Emil Audero forced to dive at his feet to keep his effort out, before the visitors went even closer moments later when Gosens slid in at the far post, his strike hitting the woodwork and going wide.

The breakthrough appeared inevitable, and it came in scruffy fashion. Zapata struggled to sort his feet out, but under pressure from Joachim Andersen he managed to get enough on his shot for it to trickle into the net.

Sampdoria had been unable to get going after the interval, so needed some help to get back into the contest. They got it through an unlikely source; Atalanta’s captain Gomez. There appeared to be little danger, with the Argentine looking to dribble the ball out of his own box. However, he inexplicably put his hands on the shoulder of Gaston Ramirez who did not need a second invitation to go down. The referee pointed to the spot, and Quagliarella made it 1-1, going back to the top of the Serie A goal-scoring charts in the process.

A draw would have done neither side much good in their battle for European football next season. With both sets of players pushing for a winner, it was Atalanta who got the crucial third goal of the game. Much like earlier in the half, Gosens made the run to the back post, but this time was able to squeeze his shot home from a tight angle to restore Atalanta’s advantage.

There were still 13 minutes to play, and Sampdoria did not make the final stages easy for their opponents. Gollini pulled off the save of the game in the final minutes, diving to his left to keep out Albin Ekdal’s header.

Atalanta stay six points outside the top four with eleven games to go. For Sampdoria, a European place may be a step too far, as they slipped to five points behind Atalanta, staying in 9th place in the table.

Claudio Ranieri started his second spell in charge of Roma with a victory, watching his team beat Empoli 2-1 in Rome. All of the goals arrived before the break, Stephan El Shaarawy and Patrick Schick finding the net either side of a Juan Jesus own goal. Alessandro Florenzi was sent off with ten minutes to go, but Roma survived a VAR review which ruled out an Empoli equaliser to stay in fifth place.

Moise Kean made the most of a rare start, scoring twice as Juventus routed Udinese 4-1 on Friday. The striker produced two composed finishes to put Juventus in control, before an Emre Can penalty and Blaise Matuidi header made it 4-0. Kevin Lasagna netted a late consolation for Udinese. Juventus now turn their attentions to trying to overturn a two goal deficit when they take on Atletico Madrid on Tuesday.

Inter Milan ended a run of three games without a win in all competitions, beating SPAL 2-0 to stay in fourth. Matteo Politano and Roberto Gagliardini were on target in the second half. SPAL are now just two points above the relegation zone.

AC Milan made it five consecutive league wins, eventually battling to a 2-1 win over a stubborn Chievo side. Lucas Biglia’s exquisite free-kick put Milan ahead, but the lead did not last long, with Perparim Hetemaj heading in a deserved equaliser for the bottom club. Once again it was Krzysztof Piatek who delivered when needed, as he poked home the second half winner. Milan remain in third, a point above Inter ahead of the derby next weekend.

Napoli needed a late Lorenzo Insigne goal to rescue a point against Sassuolo, as the two sides drew 1-1 on Sunday evening. Domenico Berardi’s goal shortly after half time looked to have given Sassuolo a surprise win, only for Insigne to level matters in the 86th minute. Napoli have now won just one of their last five away games in the league, and have slipped to 18 points behind Juventus.

Fiorentina and Lazio played out a 1-1 draw on Sunday night, in a result that failed to help either team in their quest for a European spot. Ciro Immobile gave Lazio the lead before the break, yet Luis Muriel earned Fiorentina a share of the spoils by scoring the equaliser just after the hour mark. Lazio are eight points outside the top four with a game in hand, and will need a strong end to the season to put the pressure on the sides above them.

Another club in the mix for a top four finish are Torino, who won 2-1 at Frosinone to make it three wins on the bounce. They fell behind here thanks to a Luca Paganini header, but responded well in the second half, with an Andrea Belotti double turning the game around. Currently in sixth place, Torino are just six points outside the Campions League places.

Bologna recorded a much-needed 2-0 win against Cagliari to close to within a point of safety. Erick Pulgar and Roberto Soriano scored either side of half time, as Bologna picked up just their fourth win of the season. Cagliari remain in 14th but the gap between themselves and the bottom three now stands at just six points.

Parma won for the first time since January, earning a 1-0 win over Genoa. Juraj Kucka produced the winner with twelve minutes left. The result lifts Parma to 11th whilst Genoa sit in 13th, three points further back.