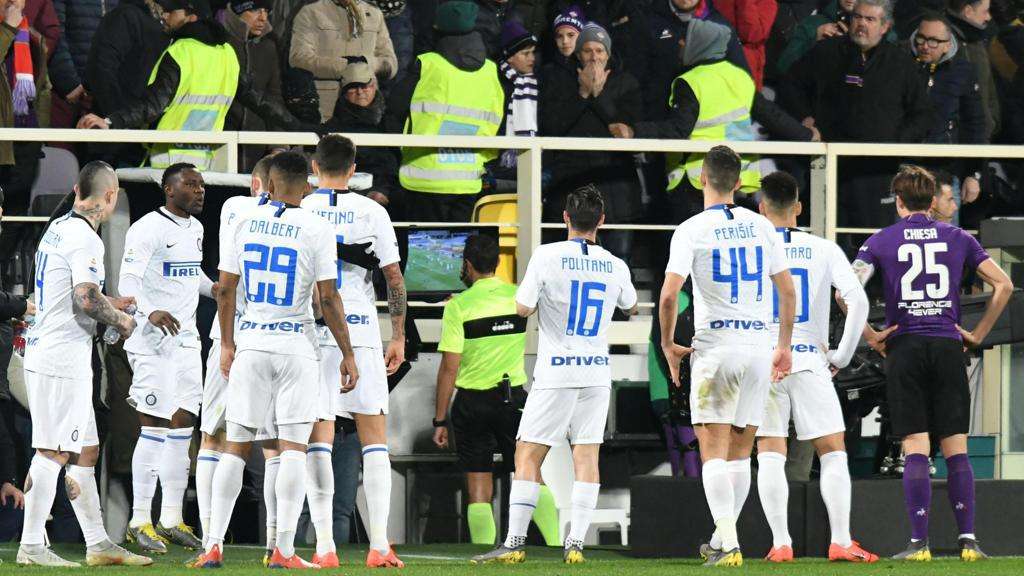 Despite all the recent drama surrounding star striker Mauro Icardi, Inter came to the Artemio Franchi tonight on a four-match winning streak. Meanwhile, the Florentine hosts were undefeated since the winter break. One would figure something had to give in a match where both sides needed a result.

The late Sunday night match had a bit of everything; a goal within the opening twenty seconds, a penalty kick in the 100th minute and lots of drama and VAR controversy in between.

All in all, a draw was probably the fair result but Inter will feel hard done by after a very soft penalty was called against them deep into stoppage time. Fiorentina’s fight and resolve in the second half was commendable as the Viola crawled back for their 12th draw of the Serie A campaign.

Referee Rosario Abisso had a poor match officiating throughout. Both on the field and VAR decisions raised questions while he ending up losing some control over the match towards the end. The wait time for a call to be checked by the Video Assistant Referee has to become more efficient; it took a full two minutes to confirm Inter’s first goal.

The introduction of the VAR technology has certainly not ended controversy in Italian football. In the end, subjective calls will come down to the decision of the referee. Unfortunately, some matches continue to be marred by officiating decision.

Luciano Spalletti on the controversial last-minute penalty awarded to Fiorentina: “It’s clear. It’s his chest. There is no argument here. There is no doubt here. It’s his CHEST. We saw it clearly. Everyone saw the VAR from the touchline, everyone saw it!” pic.twitter.com/AXFMZWWVtW

Beyond the controversy tonight, each side has positives to pick from.

Inter bounced back very well in the first half after conceededing right at the start. The goals from Vecino and Politano were both quality and Inter dominated play for spells in the opening half. Despite the solid performance on the pitch, the two points dropped by the Nerazzurri are quite important. Spalletti’s side is now fully in the race for the last Champions Leauge spot as just three points separate Inter in third and Roma in fifth.

The point is much more valuable to Fiorentina, who sit in ninth place just two points out of a Europa League qualification spot. Just a mere two points are between sixth and tenth in the table, although Lazio do have a match in hand. Despite missing two starting defenders, German Pezzella and Nikola Milenkovic, Pioli’s side played fairly well and could certainly argue they deserved a point.

Fiorentina will host Atalanta in the first leg of the Coppa Italia semi-final on Wednesday night before then travelling to Bergamo to play Gasperini’s side yet again on Sunday.

Inter meanwhile will travel to Sardinia to face Cagliari on Friday night before travelling to Germany to face Eintracht Frankfurt in the Europa League Round of 16 next Thursday.

Each of these sides are approaching crucial stages of their season and they will probably be hoping for less VAR drama.

Napoli identify Milenkovic as a replacement for Chelsea...