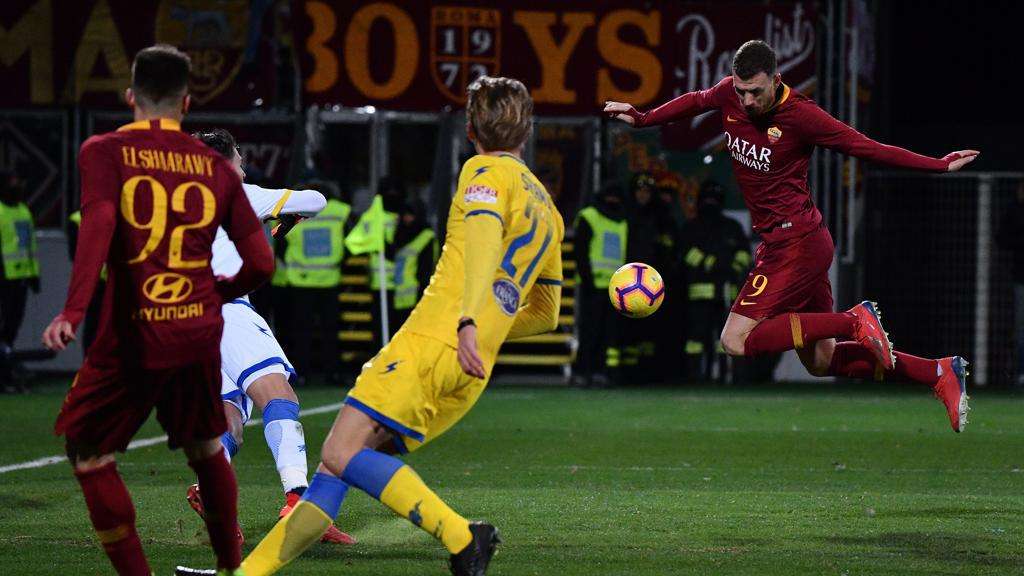 An injury time Edin Dzeko goal saw Roma pick up a crucial three points on Saturday night, as they overcame Frosinone 3-2 in a match full of twists and turns. After an underwhelming campaign, Roma failed to fully convince again here but got the better of a thrilling contest to stretch their winning streak in all competitions to four matches.

Frosinone had also won two of their last four league games, marking their best period of the season, so entered this match hopeful of causing an upset. It did not take long for them to give their fans something to cheer about, with Roma gifting them the lead inside five minutes. Steven N’Zonzi’s misplaced pass found Camillo Ciano, who tried his luck from the edge of the area. It was a well-struck effort, yet still should have been comfortable for Robin Olsen. Instead, the Swedish international keeper made a hash of the save, with the ball bouncing under his body and into the net.

Roma have already dropped points this season to bottom half clubs such as Chievo, Bologna and Udinese, and were in danger of coming unstuck once more on this occasion. They fought back commendably though and turned the game around completely with two goals in a minute on the half-hour mark. This time it was Frosinone’s defending that was questionable. Edoardo Goldaniga took far too long to clear his lines, allowing Dzeko to steal in and scuff an effort into the bottom corner via the post. Frosinone appeared stunned by the setback, and Roma took full advantage, taking the lead with their next attack. Stephan El Shaarawy was played through, and despite a fine save from Marco Sportiello, Lorenzo Pellegrini was on hand to tap home the rebound.

The way in which Roma were able to find themselves in front made for worrying viewing for Frosinone fans, who would have been concerned that their side were in danger of collapsing. That was not the case though, Frosinone seem to have found greater resilience in recent times, and battled back into this match, refusing to let Roma extend their lead in the second half. With ten minutes left on the clock, Frosinone were level. Substitute Andrea Pinamonti exchanged a slick one-two with Ciano, before coolly rolling the ball past Olsen.

At this point, the momentum was with Frosinone, and they had a glorious chance to earn a stunning victory, only for Olsen to tip away Marcello Trotta’s effort in the dying minutes. It looked like both sides were going to have to settle for a point, but Roma had other ideas. Daniele De Rossi clipped a lovely pass in behind the Frosinone defence, leaving El Shaarawy to cross for Dzeko to nudge the ball over the line with his thigh.

Heartbreak for Frosinone who stay five points adrift of safety. For Roma, it was about getting the job done, something that they just about managed in the end, meaning they stay one point outside the top four ahead of next week’s Rome derby.

Fiorentina and Inter played out an enthralling 3-3 draw, in a game where four of the goals required VAR reviews. Fiorentina had gone ahead inside 20 seconds when a ball in behind caught out Inter, and Stefan de Vrij could only turn the ball into his own net after Giovanni Simeone fluffed his lines. The goal stood after a check for offside, but Inter hit back within five minutes, Matias Vecino staying just onside to net against his former club. Inter then took control, Matteo Politano firing home from the edge of the area, before Ivan Perisic converted from the spot following a VAR review which decided Edimilson Fernandes had deliberately handled inside the area. The game appeared out of reach for Fiorentina, but Luis Muriel’s spectacular free-kick gave them hope, and they were given a lifeline deep into added time when Danilo D’Ambrosio was penalised for handball. Again VAR was used, yet the decision was upheld, allowing Jordan Veretout to earn Fiorentina a point in the 101st minute.

Napoli thrashed Parma 4-0 to move nine points clear of Inter in second place. In a display full of delightful link-up play, Napoli never appeared in danger, scoring twice in either half. Piotr Zielinski and Arkadiusz Milik were on target before the break, whilst Milik scored again to make it 3-0 before Adam Ounas got in on the act late on. For Parma, that is now four losses in their last five games, as they slip to 13th.

AC Milan beat Empoli 3-0 on Friday to stay inside the top four. Empoli did well to restrict Milan to few chances in the first half but were blown away after the break, with Krzysztof Piatek, Franck Kessie and Samu Castillejo all finding the net. Milan remain unbeaten in the league since the turn of the year, and head into Tuesday night’s Coppa Italia first leg against Lazio full of confidence.

Juventus returned to winning ways after Wednesday’s defeat to Atletico Madrid, edging past Bologna 1-0. Paulo Dybala came off the bench to sweep home the winner after Bologna failed to clear Blaise Matuidi’s cross. The champions were some way from their best though and were grateful to Mattia Perin for an excellent late save, turning a long-range effort onto the post.

Torino handed Atalanta a second straight defeat, beating Gian Piero Gasperini’s men 2-0 on Saturday afternoon. Two goals in a four-minute spell either side of half time were enough for Torino, with Armando Izzo and Iago Falque getting on the scoresheet. Atalanta, who opted to rotate a little ahead of the Coppa Italia semi-final on Wednesday, now appear to be out of the running for a top four spot.

Sampdoria ended a run of three successive losses, triumphing over Cagliari 1-0. After a run of results that has seen them slip down to mid-table, Sampdoria got back on track thanks to Fabio Quagliarella’s match-winning penalty.

SPAL picked up an important point in their battle to secure another season in the top-flight, drawing 1-1 away at Sassuolo. Federico Peluso put the home side ahead, with Andrea Petagna levelling from the spot midway through the second half. Alfred Duncan was sent off in injury time on a frustrating afternoon for Sassuolo, who stay in 11th place.

Chievo moved their points total into double figures after a 0-0 stalemate with Genoa. The bottom club remain winless in 2019, and are 11 points from safety with 13 games to go, whereas Genoa sit comfortably in mid-table, the same number of points above the drop zone.