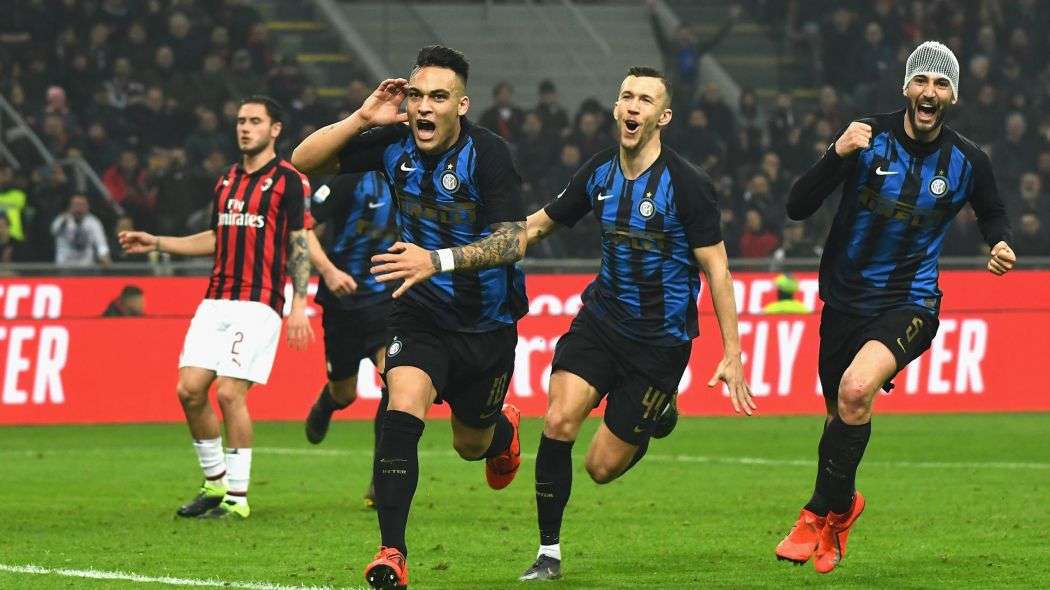 Inter Milan secured their second victory of the season over their local rivals AC Milan, winning 3-2 to leapfrog their opponents and move back into the top three on Sunday evening. The reverse fixture earlier in the campaign lacked goalmouth action, eventually being decided by an injury-time strike from Mauro Icardi. The same type of affair was expected here, but instead, the two Milan clubs served up an enthralling contest.

Coming into the game, the momentum appeared to be with AC Milan. They had won five straight league games, and despite being some way short of their best in the last two matches against Sassuolo and Chievo, the team had managed to grind out valuable wins to show a steeliness that had been missing in the first part of the season.

For Inter, there had been worrying signs since the start of the year. The team have looked fragile at times, suffering defeats to Bologna and Cagliari, whilst they were also dumped out of the Europa League on Thursday by Eintracht Frankfurt. Add in the fact that Icardi has not featured since being stripped of the captaincy in early February, and it is clear that this has been a difficult start to the year for Luciano Spalletti’s men, with Inter dropping down to fourth, a point and a place behind Milan heading into this derby clash.

Inter were poor in midweek against Frankfurt, yet any fears that they would be bereft of confidence were put to bed inside three minutes. Ivan Perisic’s floated cross to the back post was calmly nodded down by Lautaro Martinez into the path of Matias Vecino who volleyed home from close range.

The perfect start for Inter, and it appeared to knock Milan out of their stride. Milan have been resilient at the back in recent times but were opened up at will on a number of occasions in the opening 45 minutes. Vecino should have doubled his and Inter’s tally, instead skewing his effort horribly wide after being played in by Perisic. Soon after it was Milan Skriniar’s turn to pass up a golden opportunity, the Slovakian centre back heading wide from a corner having found space in the area.

Somewhat fortunate to only be a goal behind at the interval, Milan needed a response after the interval. However, it was more of the same in the opening minutes of the second half, as Inter extended their lead. From a well-worked corner kick routine, the ball was played in for Stefan de Vrij to head into the bottom corner past the helpless Gianluigi Donnarumma.

At this stage, there seemed to be no way back for Milan, who had rarely threatened in the first 55 minutes. That changed just before the hour mark. Hakan Calhanoglu’s free-kick was attacked by Tiemoue Bakayoko, who powered his header beyond Samir Handanovic for his first goal in a Milan shirt. This lifted the crowd of over 77,000 who sensed that a historic comeback could be on the cards. These hopes were to be short-lived though. Matteo Politano’s weaving run was brought to a halt by Samu Castillejo just inside the area, allowing Martinez the chance to step up from the spot and restore Inter’s two goal advantage. The Argentine striker made no mistake.

Yet Milan were still not done. They halved the deficit once again when Suso’s cross caused problems in the penalty box, the ball falling for Mateo Musacchio who could not miss with the goal at his mercy. A grandstand finish awaited.

Still, Milan looked to make to things difficult for themselves and seemed to have been reduced to 10 men as injury time approached when Andrea Conti was shown a straight red card for a very late tackle on Martinez. As Martinez lay on the floor in the aftermath, the referee opted to review his original decision, before finally reducing the punishment to just a yellow card, handing Conti and Milan a reprieve.

Six minutes were added on, plenty of time for Milan to grab an equaliser. Twice they went close, with Castillejo seeing his header kept out by the chest of Handanovic, whilst Patrick Cutrone was denied by a fine goal-line block from Danilo D’Ambrosio. The final whistle was greeted by a mixture of delight and relief by Inter, who had held on for a famous victory.

Spalletti will hope that this is a turning point for his Inter side, who face a tough run-in; Lazio, Atalanta, Roma and Juventus all have to come to Milan, prior to Inter travelling to Naples on the penultimate matchday of the season.

For Milan this was their first league defeat in 2019 and a heated confrontation between Franck Kessie, who was unhappy to be replaced in the second half, and Lucas Biglia during the second half further soured a disappointing night for the Rossoneri. They will need to regroup after the international break, as they look to hold off the chasing pack and earn themselves a Champions League spot for next season.