After spending a year on the sidelines in his first year at the club, Luis Alberto was given a chance to prove his worth. Making the most of the playing time he was presented with, he was transformed into a second striker by Simone Inzaghi in the summer for 2017. However, as the saying goes, “all good things must come to an end.”

In comparison to last season, in which he scored 12 goals and 21 assists from 47 matches in all competitions, it is without a doubt that Luis Alberto has not performed to the fullest of his capabilities. While many factors can be to blame and debated – such as the injury he sustained through the summer and into the first part of the season, the possibility that last season was a ‘breakout year,’ or the jersey change to #10 – the main reason for this drop in form is likely linked to mental struggles.

Internal battles, when Alberto does not perform to his standards – which are extremely high coming off such a glorious 2017/18 campaign – it weighs on his thoughts and ability, lowering his confidence. When this happens, nothing seems to go his way and frustration takes over, resulting in a negative impact on not only himself but all of Lazio.

However, through all of this controversy and drama, the Spaniard has been – and continues to be – one of the top players on the Biancocelesti. This 2018/19 campaign, in 36 matches, he has six goals and eight assists. Although this point total is less than half of the production that he was able to record last year, this is still considered a respectable season for the player, especially considering the up and downs he has been through in his playing career in addition to having to adjust to a new position.

Hitting a roadblock and failing to find quality in front of goal for the first half this season, Inzaghi took it upon himself to assist Luis Alberto, moving him back to a central midfield role. This move left room for Felipe Caicedo and Joaquin Correa to play alongside Ciro Immobile. However, in his preferred 3-5-1-1 formation, this meant that he had to sacrifice a central midfielder, specifically one of the veterans on Lazio. This was Marco Parolo, who we have seen starting from the bench more often since January as a result of this tweak in the system. Creativity has been favored, especially with the help of Sergej Mlinkovic-Savic and Lucas Leiva, who fulfill the role of ‘aggressive and hard-working midfielders’. Surprising clubs, this switch did wonders for the struggling star, as since being moved from a striking role, he has produced nearly all of his goals and assists. As Opta Paolo points out, the 26-year-old even broke a record in matchday 36 of Serie A against Cagliari: the player scored and provided an assist in the match. This was the sixth time he has done this, more than any other foreigner in the last two Serie A campaigns. 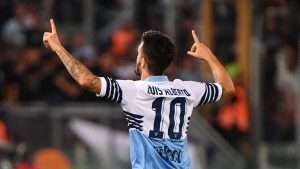 Luis Alberto’s production has dropped but he still plays a pivotal role in Lazio’s system.

Although Lazio looks to have failed in achieving their goal of making the 2019/20 Champions League, Le Aquile still have something to fight for this campaign: only Gian Piero Gasperini’s Atalanta stand in the way of the Coppa Italia. With various football fans giving La Dea the advantage due to the form and quality they have displayed this season, it is hard to count Lazio out.

A match being played at the Stadio Olimpico – their home – this ground is where they have won their most two recent awards: the 2012/13 Coppa Italia and 2017 Supercoppa. If you acknowledge that Atalanta’s most recent award was the Coppa Italia back in 1962–63, their lack of experience may take a toll on their mission.

Desiring an adequate conclusion of the season, Lazio will have to count on all of their stars to perform if they are to firstly acquire this trophy, and finish in a European spot. The margins for error are small and the consequences could be costly, but if Luis Alberto can be the magician that we became so accustomed to, we can hopefully see the Biancocelesti obtain success.