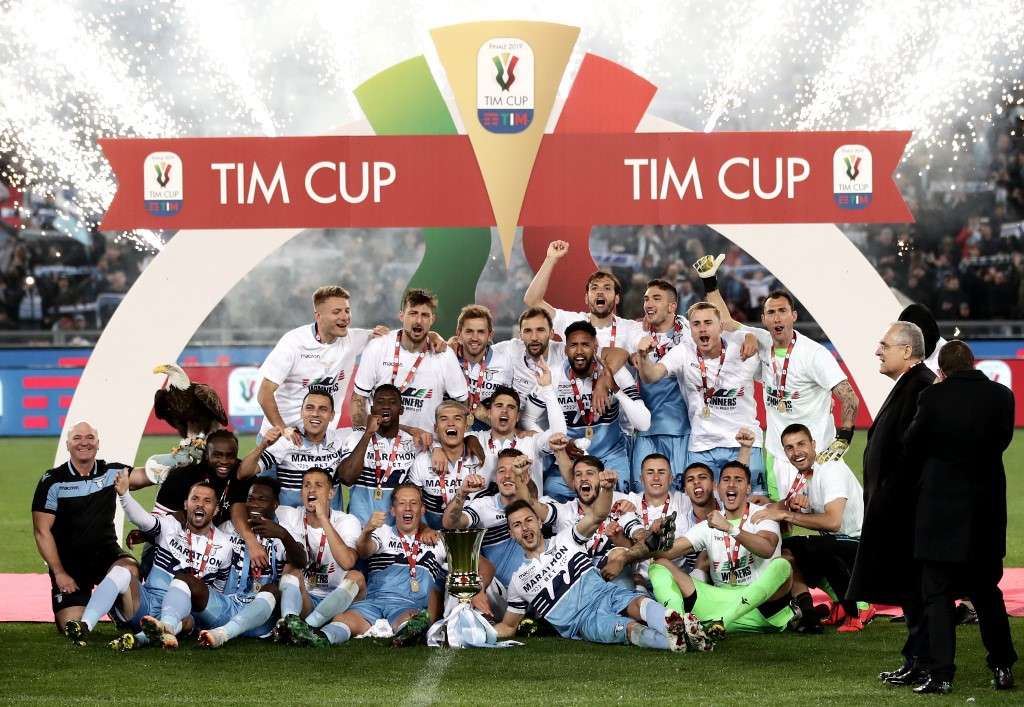 Lazio claimed their seventh Coppa Italia on Wednesday night by beating Atalanta 2-0 at the Stadio Olimpico. In a tense encounter, the match was settled by two goals in the final eight minutes from Sergej Milinkovic-Savic and Joaquin Correa.

Both sides had impressed on their way to the final, with Atalanta seeing off defending champions Juventus in the quarter-finals, whilst Lazio beat both of the Milan clubs to book their place in the showpiece event.

Atalanta entered the game in better form as they seek a place in the top four, and will have been happy to see Milinkovic-Savic left on the bench having not yet fully recovered from an ankle problem picked up last month. Yet with rain pouring down in the capital, and a near capacity crowd in attendance, neither side were able to settle into the game.

It was Lazio who were enjoying the majority of possession, but Atalanta were remaining uncharacteristically solid at the back, preventing any clear-cut chances being created. Indeed the first big opportunity of the final fell to Atalanta. Marten De Roon’s acrobatic volley was deflected onto the post, with Remo Freuler and Duvan Zapata unable to find the net with their follow-up efforts. A moment of fortune, so often the key in these tight affairs.

The rest of the half went by rather quietly. The only other eyebrow-raising moment came when Bastos was substituted with 10 minutes of the first half left, being replaced by Stefan Radu. Was he injured? It did not appear so, he was simply on a booking and was not trusted to complete the rest of the half without picking up another caution. Ruthless from manager Simone Inzaghi, taking no risks in the final.

The hope was that the second half would provide greater quality and end-to-end action from two of the best attacking teams in Serie A. For the first half an hour after the interval, that did not materialise. Instead fans were treated to foul after foul, with Josip Ilicic seemingly falling to ground every other minute from kicks, trips and barges. Senad Lulic and Lucas Leiva were booked, but did not appear overly-concerned. They were disrupting the rhythm of Atalanta, the key ingredient to beating them.

Yet Lazio were struggling to fashion many chances themselves. When one did arrive, Correa took a woefully heavy touch, allowing Jose Luis Palomino to get across and clear the danger. The game needed a hero. With 11 minutes to go, he was summoned.

Milinkovic-Savic replaced Luis Alberto, and three minutes later Lazio won a corner. From the set-piece, the Serb towered above his marker and headed into the far corner. Jubilation in the stadium, as Milinkovic-Savic, so often criticised this season, had found the magic touch at just the right time.

Milinkovic-Savic scores with his first touch to put Lazio ahead with under 10 minutes left!! #CoppaItalia pic.twitter.com/UtyejApXcf

Atalanta looked dejected. This was supposed to be their crowning moment after a stunning campaign that looked as though it may result in silverware and a place in the Champions League. Now the first part of that remarkable double was slipping away. They had no response.

Having failed to find the necessary quality all evening, it continued to allude them in the closing minutes, and the game was put beyond doubt in the final minute. With most of Atalanta’s defence caught up-field, Correa was left alone with two Atalanta defenders. The Argentine forward sprinted past the helpless duo, rounded Gollini, and fired past Robin Gosens on the goal-line. A splendid individual goal to cap a memorable night for Lazio, who wrapped up their first Coppa Italia since 2013.

Correra puts the match to bed for Lazio with a brilliant individual effort!! #CoppaItalia pic.twitter.com/71AuqroMTi

Atalanta must regroup. They face Juventus in Turin on Sunday, looking to stay on course for Champions League football next season. This night belonged to Lazio though. Only Juventus and Roma have won the Coppa Italia more times, and Inzaghi’s side partied into the early hours with a place in the Europa League next season secured.