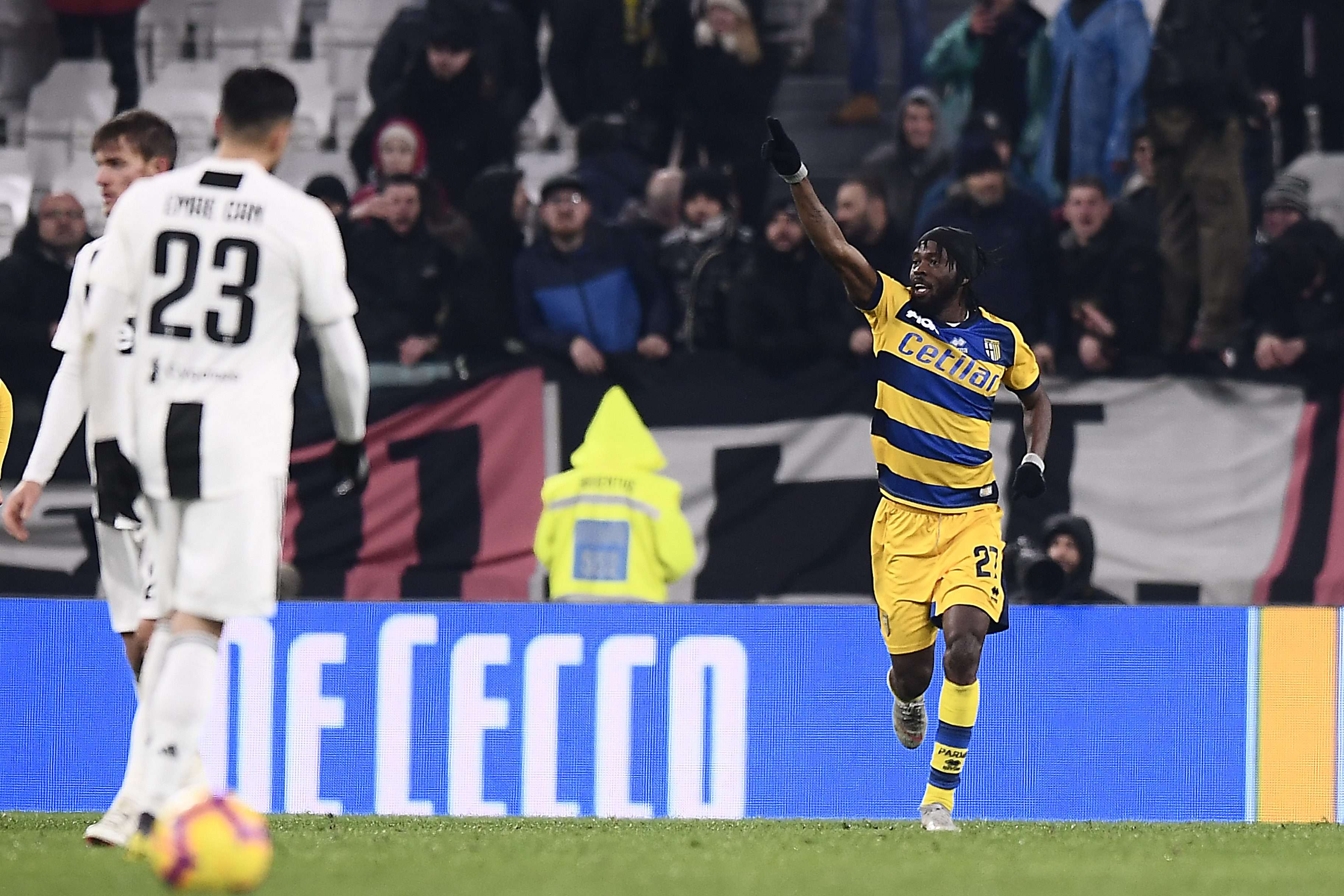 Gervinho scored an injury-time equaliser for Parma as they secured a dramatic 3-3 draw against Juventus in Turin on Saturday night. Juventus twice held a two-goal advantage but were pegged back both times, meaning they conceded six goals in the space of three days.

Looking to bounce back from their humbling defeat to Atalanta in the Coppa Italia on Wednesday night, Juventus piled on the pressure in the early stages. They were met by a resolute Parma defence though, and it took 36 minutes for Juventus to finally make the breakthrough. When it arrived, it was no surprise as to who delivered the goods. Cristiano Ronaldo slipped as he shot from inside the area, yet his effort was still strong enough, with the help of a deflection, to beat Luigi Sepe.

Parma had offered little attacking threat in the first half, so a second Juventus goal looked to have marked the end of their challenge. Daniele Rugani was left alone in the box, allowing him to head home from close range. This was to be the first of three goals in four minutes; Parma hit back through an Antonino Barilla header, only for Ronaldo to match that effort with a fine leap and finish from Mario Mandzukic’s cross.

Teams rarely come back from two goals down when facing Juventus, but Parma were not finished yet. Step forward Gervinho. The Ivorian is enjoying a stellar first season for the newly-promoted club and flicked home Parma’s second to set up a nervy ending. Without Giorgio Chiellini and Leonardo Bonucci due to injury, Juventus looked far from assured at the back, giving Parma hope on the counter-attack. With time ticking away, they launched one final attack, the ball was cut back to Gervinho who produced a first-time finish past Mattia Perin to earn an unlikely draw for the visitors.

Juventus are now nine points clear at the top of the table, having dropped points for just the third time in the league this season. The past week has shown chinks in their armour though, giving hope to their league and European rivals alike. Parma stay in 12th following an impressive display at the home of the champions.

Gianluigi Donnarumma was in inspired form to deny Roma all three points on Sunday evening, with Roma and AC Milan playing out a 1-1 draw. Krzysztof Piatek scored his third goal in two games for the club, prodding home at the near post to put Milan in front, before Donnarumma then stole the show. His best moment arrived late in the first half, as he pulled off a stunning double save to keep Patrick Schick and Edin Dzeko at bay. Roma levelled within 20 seconds of the restart, Nicolo Zaniolo turning in from close range, but neither side were able to force a winner.

Sinisa Mihajlovic got his tenure as Bologna’s manager off to the perfect start, his side beating Inter Milan 1-0 to ramp up the pressure on Luciano Spalletti. Federico Santander headed home the winner from a first-half corner, and Inter were unable to respond, meaning they have picked up just one point from their last three games, whilst also being dumped out of the Coppa Italia on penalties by Lazio. Bologna remain in the relegation zone but are now just one point from safety.

Fabio Quagliarella was unable to break the record for scoring in successive matches in Serie A, as Napoli cruised to a 3-0 victory over Sampdoria. The Italian striker was aiming to score for the twelfth game running but rarely came close to achieving that target, instead watching Napoli deliver an exceptional display of attacking football at the other end of the pitch. Goals from Arkadiusz Milik, Lorenzo Insigne and Simone Verdi extended Napoli’s lead over third-placed Inter to 11 points.

Atalanta closed to within one point of the top four with a hard-fought 1-0 win away at Cagliari. Having netted eleven goals in their previous three games across all competitions, the visitors were frustrated at times but got the three points through Hans Hateboer’s goal five minutes after half time. Cagliari sit four points above the relegation zone having picked up just one point since the winter break.

In the crunch clash at the foot of the table, Empoli fought back from a two-goal deficit to earn a draw with the bottom side, Chievo. Emanuele Giaccherini and Mariusz Stepinski looked to have put Chievo on course for just their second win of the campaign, yet a Francesco Caputo double either side of the break meant both sides left with a point. The draw does little to help Chievo’s survival chances, they stay nine points from safety, whilst Empoli are outside the bottom three by a solitary point.

Lazio won for the first time in the league since Boxing Day, edging past Frosinone 1-0 on Monday evening. Felipe Caicedo grabbed the winner, leaving Atalanta, Roma and Lazio all locked on 35 points, as the battle for a top-four spot heats up.

Udinese and Fiorentina shared the spoils in a 1-1 draw on Sunday afternoon. Fiorentina have been involved in some remarkable results since the winter break, with their three games in all competitions producing 21 goals. This was a quieter affair though, as Edimilson Fernandes cancelled out Jens Stryger Larsen’s opener.

Antonio Sanabria scored for the second game in a row to hand Genoa a point at home against Sassuolo in a 1-1 draw. Filip Djuricic had put the away side ahead, only for Sanabria to level matters just before the interval. Genoa and Sassuolo have now won four points from their last two matches, despite losing Krzysztof Piatek and Kevin-Prince Boateng respectively in the latter stages of the transfer window.

SPAL could not capitalise on a man advantage, drawing 0-0 at home to Torino. Nicolas N’Koulou was sent off with 25 minutes still to play, but Torino held out to retain their status in the top half. SPAL hold a five-point lead over the bottom three as they look to secure a third straight season in Serie A.