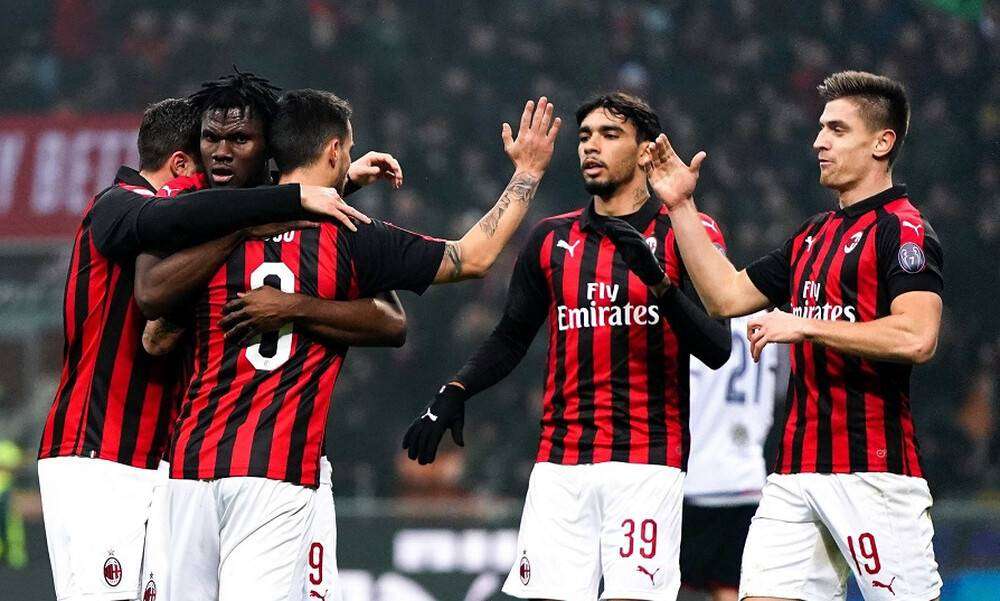 AC Milan stretched their unbeaten run in the league to six games on Sunday night, recording a convincing 3-0 victory over Cagliari. Having started the game in seventh after wins for their rivals earlier in the weekend, Milan showed no signs of nerves, moving back up to fourth by the end of the evening.

As early as the 13th minute, it seemed that this was destined to be Milan’s night. Suso cut inside, and although his shot was parried away by Alessio Cragno, the ball rebounded off defender Luca Ceppitelli and into his own net. An unfortunate moment for Cagliari’s captain, giving Milan the lead.

If the first goal was somewhat lucky, the second was beautifully crafted. Davide Calabria whipped in a teasing cross to the back post, allowing Lucas Paqueta to volley home his first goal for the club. The Brazilian has settled in impressively since his move from Flamengo in January, yet the recent tragedy at his former club was firmly on his mind during his celebration here. Paqueta looked up to the sky, dedicating his goal to the ten Flamengo teenage players who lost their lives during a training ground fire on Friday.

Cagliari rarely threatened to claw their way back into the game, but when they did have their chances a combination of Gianluigi Donnarumma and the crossbar denied them. Donnarumma was making his 150th appearance in a Milan shirt, and was forced into sharp stops either side of half time to keep Joao Pedro at bay; the forward also hit the bar with a dinked effort after one of Donnarumma’s saves.

It appears that a Milan game is not complete nowadays without Krzysztof Piatek getting in on the act. The Polish striker made it four goals in three games in all competitions, tucking home his side’s third just over an hour into the game. Gennaro Gattuso’s men should have extended their winning margin in the closing stages, as Suso and Hakan Calhanoglu missed presentable chances.

Still, three goals were more than enough to beat this Cagliari side who have now failed to score in any of their last three matches. They have not won since Boxing Day, and sit just three points above the drop zone ahead of their home game against Parma next weekend.

Juventus put their recent troubles behind them, picking up a comprehensive 3-0 win at Sassuolo on Sunday. The reigning champions were knocked out of the Coppa Italia by Atalanta, and then held by Parma last weekend, but got back on track in this match. Cristiano Ronaldo scored for the ninth consecutive away match in the league, taking him to 18 league goals for the season so far. His header was sandwiched in between strikes from Sami Khedira and Emre Can, as Juventus moved 11 points clear of Napoli once more.

Inter Milan secured their first Serie A win of 2019, scoring their first league goal of the year in a 1-0 win against Parma. Luciano Spalletti’s side have been unable to break down teams in recent weeks, and for long periods it seemed that may the case again in this contest. Danilo D’Ambrosio had a goal ruled out for handball, yet Inter did finally get their reward with Lautaro Martinez firing home the winner with just over ten minutes to play.

Fiorentina and Napoli played out a 0-0 draw in Florence as the visitors slipped further behind the runaway leaders, Juventus. Despite enjoying the majority of possession, a goal proved elusive for Napoli on a frustrating Saturday evening. They will return to action on Thursday when they face Zurich in the Europa League.

Roma kept up their pursuit of a top-four finish, beating hapless Chievo 3-0. Stephan El Shaarawy opened the scoring, with Edin Dzeko and Aleksandar Kolarov also getting on the scoresheet. Roma sit just a point outside the Champions League spots, whilst Chievo are rock bottom, nine points from safety.

Duvan Zapata was Atalanta’s hero once again, netting the winner in a 2-1 victory over SPAL. Andrea Petagna, on loan from Atalanta, had given SPAL a shock lead inside eight minutes. However, his goal was cancelled out by Josip Ilicic and then Zapata, ensuring that Atalanta stay in fifth place, a point behind Milan.

Lazio earned a scrappy 1-0 win against Empoli on Thursday to remain level on points with Atalanta and Roma. Without Ciro Immobile and Luis Alberto due to fitness issues, Lazio were lacklustre throughout and had to rely on a defensive howler for their goal. Goalkeeper Ivan Provedel dawdled on the ball, allowing Felipe Caicedo to take the ball off his toe and get tripped in the process. Caicedo picked himself up to convert the resulting penalty.

Frosinone pulled off the upset of the weekend, edging past an out-of-sorts Sampdoria 1-0. Daniel Ciofani’s first-half effort gave Frosinone their second win in three games and moves them to within two points of getting out of the bottom three. Meanwhile, it was a second straight defeat for Sampdoria, who dropped to ninth.

Udinese is now just one point above the relegation zone after slipping to a 1-0 loss away at Torino. Ola Aina produced the winning goal, and Udinese’s afternoon went from bad to worse when Sebastien De Maio was sent off in added time. Without a win since the turn of the year, it looks set to be another nervy end to the campaign for Udinese.

Bologna and Genoa shared the spoils in a 1-1 draw in Sunday’s lunchtime kick-off. Looking for back-to-back wins for the first time this season, Bologna went in front through Mattia Destro, only to be pegged back by Lukas Lerager’s equaliser shortly after the half-hour mark. This result leaves Bologna and Empoli on the same number of points, as the battle to avoid the drop intensifies.