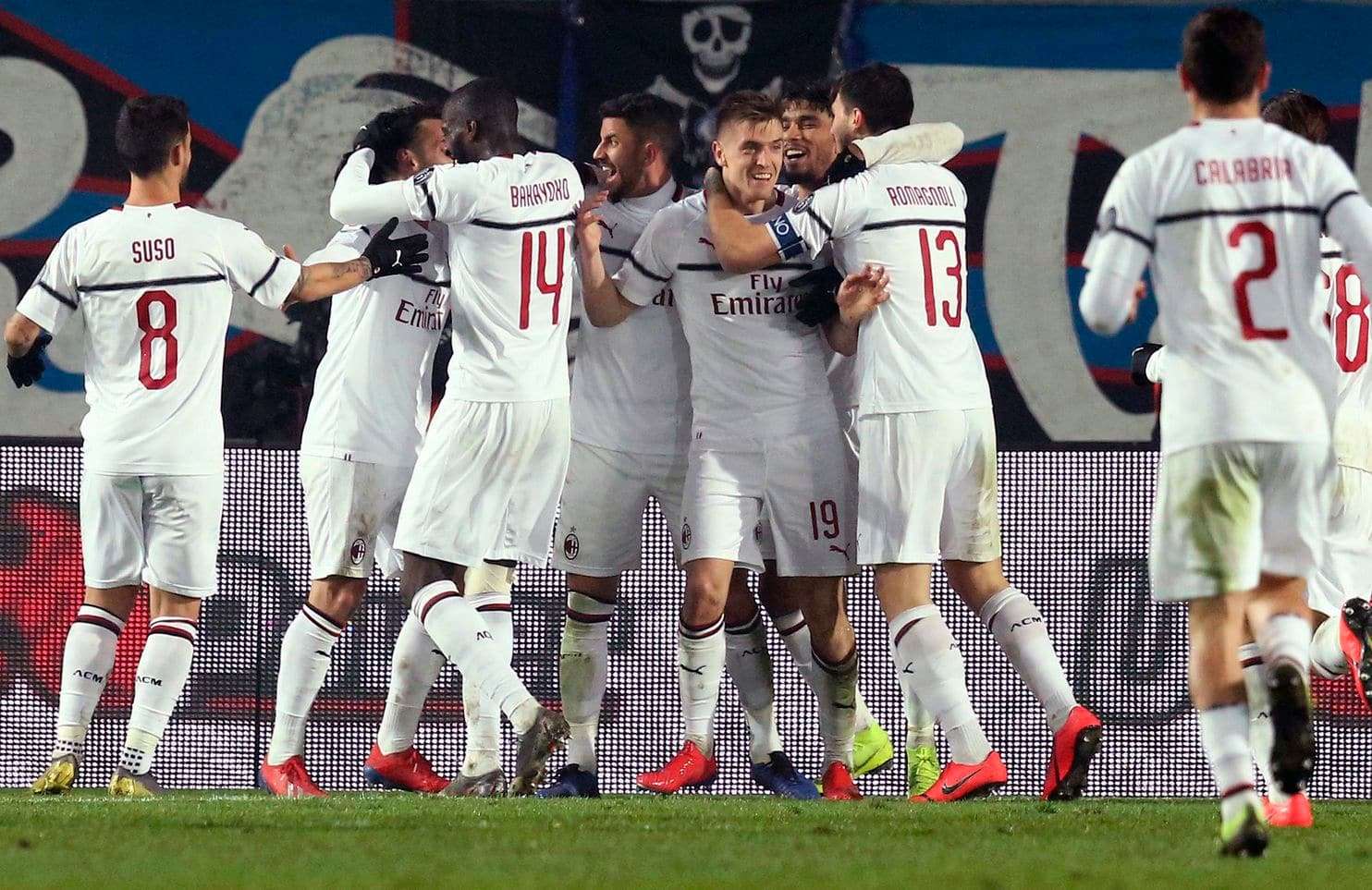 AC Milan took another step towards returning to Champions League football next season by beating Atalanta 3-1 on Saturday night in Bergamo. The visitors had fallen behind to a Remo Freuler goal, but a brace from Krzysztof Piatek and a first league goal of the season for Hakan Calhanoglu saw Milan cement themselves in fourth position in the table.

Heading into the match, just one point and one place separated the sides. Atalanta were looking to continue their fine run of form, which had seen them stay undefeated since the turn of the year. Milan have been equally impressive in 2019, picking up draws against Napoli and Roma, whilst also advancing to the semi-finals of the Coppa Italia.

It was Milan who had the better chances in this game early on. Former Atalanta player, Franck Kessie, wasted two clear chances in quick succession. His first was a wild effort that went over the bar after holding off his marker in the box, the second an even more presentable opportunity, yet the Ivorian somehow guided his header wide.

After these two let-offs, Atalanta started to find their feet in the game, taking the lead in the 33rd minute. Josip Ilicic was the provider, twisting and turning in the box before laying the ball off to Freuler, whose shot squirmed under the grasp of Gianluigi Donnarumma and into the net. A rare mistake from the Italian goalkeeper.

Atalanta appeared comfortable and looked set to take a lead into the break. Piatek had other ideas. From Ricardo Rodriguez’s cross, the Polish frontman steered a stunning volley into the bottom corner, making it 1-1 on the stroke of half time.

That goal seemed to galvanise Milan, who came out after the interval determined to build on their end to the first half. They did just that, going ahead for the first time in the 55th minute. A poor defensive clearance fell to Calhanoglu who did not need a second invitation to shoot. The winger, who has endured a difficult second season at Milan, struck the ball sweetly past the outstretched hand of Etrit Berisha.

It was left to Piatek to put the finishing touches on a comprehensive victory for Milan. He outjumped Berisha from a corner just after the hour, meaning he has scored six goals in his first five games for the club.

Atalanta tried to get back into the match in the closing stages, but rarely troubled Donnarumma. A setback for the side who have been so exciting to watch in recent times, and they now sit four points outside the Champions League places. For Milan, this was their chance to lay down a marker, which they took with both hands.

Mauro Icardi watched on from the stands as his Inter teammates held off Sampdoria in a 2-1 win at the San Siro. The striker was stripped of the captaincy earlier this week, although the club stated that knee inflammation was the reason for him missing out on this occasion. The game caught fire in the latter stages; all three goals arriving in a five-minute spell inside the final twenty minutes. Radja Nainggolan’s deflected volley settled the contest after Manolo Gabbiadini had cancelled out Danilo D’Ambrosio’s opening goal.

Genoa came from behind to beat Lazio 2-1, denting the chances of Simone Inzaghi’s team making the top four. Lazio entered the game with a depleted squad, only able to name seven substitutes, with the likes of Sergej Milinkovic-Savic, Luis Alberto and Marco Parolo missing out with injuries. They did start fairly well though, taking the lead through Milan Badelj. Fatigue seemed to set in late on, as Genoa came storming back, levelling thanks to Antonio Sanabria, before Domenico Criscito netted a stunning injury-time volley to complete the turnaround.

Napoli were held to their third goalless draw of 2019, this time by Torino on Sunday night in Naples. The home side dominated possession and had more than double the number of shots on goal than Torino mustered, but could not break the deadlock. They are seven points ahead of third-placed Inter, yet any chances of pushing Juventus for the title have been completely extinguished in recent weeks.

Juventus registered a routine 3-0 victory over Frosinone on Friday to extend their lead at the top to thirteen points. Paulo Dybala scored the pick of the goals, firing home from 25 yards after just six minutes. Leonardo Bonucci and Cristiano Ronaldo secured the win, with Juventus now looking ahead to their crunch clash with Atletico Madrid on Wednesday.

Roma took advantage of Atalanta and Lazio’s slip-ups, edging out Bologna 2-1 at the Stadio Olimpico. Second half goals from Aleksandar Kolarov and Federico Fazio looked to have made the game safe, only for Nicola Sansone to set up a nervy ending. Still, Roma held on and remain just a point outside the top four.

Empoli earned their first win since early December, beating Sassuolo 3-0 to bolster their chances of staying in Serie A for another season. Two goals in three minutes from Rade Krunic and Afriyie Acquah set the side on their way, with Diego Farias wrapping up the three points on the hour mark to lift Empoli three points clear of the relegation zone.

Cagliari picked up a crucial win in their fight to remain in the top-flight, as a Leonardo Pavoletti double was enough to beat Parma 2-1. Juraj Kucka’s excellent header had given Parma the advantage, only for Pavoletti to respond with a tap-in from a well-worked free-kick, followed by a towering header of his own from Nicolo Barella’s cross five minutes from time. Joao Pedro was sent off late on, but Cagliari held on to jump to 14th in the table.

Chievo look destined for Serie B after they lost to Udinese 1-0 on Sunday afternoon. Needing a win to have any realistic chance of staying up, the bottom side were undone by a late Lukasz Teodorczyk goal, who tapped home after seeing his penalty saved by Stefano Sorrentino. Chievo are now 12 points from safety with 14 games remaining.

Three goals in the final eleven minutes saw Fiorentina record a 4-1 victory over SPAL to move into 8th place in the league. Andrea Petagna had put SPAL ahead, only for Edimilson Fernandes to equalise within five minutes. Fiorentina produced a late flurry, with Jordan Veretout, Giovanni Simeone and Gerson getting on the scoresheet to seal the win.

Khedira to miss Atletico clash due to heart condition