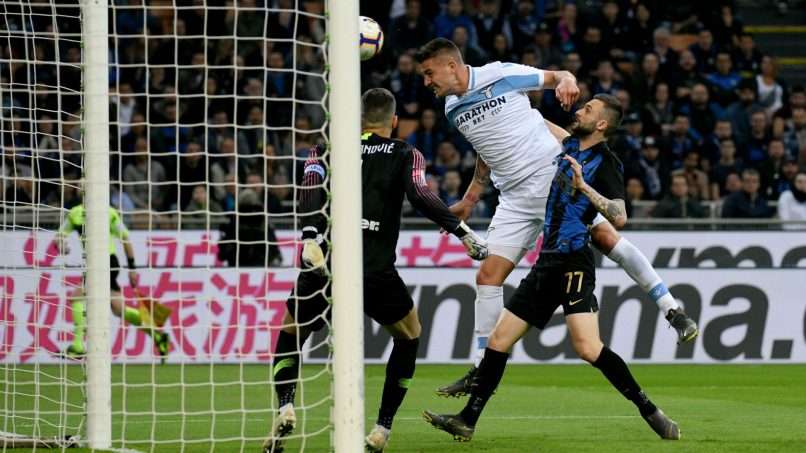 Lazio win in Milan to close in on the top four

A Sergej Milinkovic-Savic first half header was enough to hand Lazio a 1-0 win over Inter Milan and move to within three points of the top four. Having won the Milan derby two weeks ago, Inter appeared to be back on track, but this result leaves the race for the top four wide open.

Prior to the game, Inter held an eight point advantage over Lazio, albeit having played a game more. Yet Luciano Spalletti’s side were missing key players, with former Lazio player Stefan de Vrij and the in-form Lautaro Martinez ruled out through injury, whilst Mauro Icardi was omitted once more despite training with the squad during the international break. This left Keita Balde to start up front, a position that he has rarely featured in this season.

Lazio started brightly, conceding the majority of the possession to the hosts, yet looking dangerous on the counter-attack. It took them just 12 minutes to break the deadlock. Luis Alberto’s perfectly weighted cross was met by Milinkovic-Savic, who could not miss from two yards out.

Inter needed a response, and they began to crank up the pressure in the latter stages of the first half, with Keita Balde forcing a good low stop from Thomas Strakosha at his near post. Lazio were still creating opportunities at the other end though, as Samir Handanovic pulled off a fine reaction save to deny Bastos from point blank range.

Into the second half, and Inter continued to probe, but were clearly missing the predatory instincts of Icardi and Martinez. Instead it was Lazio who nearly extended their lead, Handanovic once again coming to the rescue to keep out Felipe Caicedo. Matteo Politano went close with a curling effort from the edge of the area, and substitute Radja Nainggolan ensured that Strakosha was alert with a driving run and shot in the closing minutes.

There was to be no equaliser for Inter, meaning that they remain in third, but now just five points ahead of Lazio who play their game in hand against Udinese next Wednesday.

An emotional Spalletti lifted the lid on the current Icardi situation after the game explaining “how he behaved, he must stay out”. After clear-the-air talks earlier this week, it seemed that the matter had been cleared up, but Spalletti’s words after the game paint a different picture. Inter are struggling for goals, and the latest developments suggest that their talisman may not have a way back under Spalletti.

Napoli heaped misery on Roma by hammering their rivals 4-1 in Rome. Claudio Ranieri’s appointment has failed to have the desired effect, as he has seen his team lose two of their three games since he took over. Arkadiusz Milik’s opener had been cancelled out on the stroke of half time by Diego Perotti’s penalty, but Napoli dominated the second half, wrapping up the win with goals from Dries Mertens, Simone Verdi and Amin Younes.

Sampdoria inflicted a second straight defeat on AC Milan, taking advantage of a Gianluigi Donnarumma error to win 1-0. Looking to bounce back from the Milan derby loss just before the international break, Milan got off to the worst possible start when Donnarumma’s dreadful pass inside the opening minute was intercepted by Gregoire Defrel, who tapped the ball into the unguarded net. Milan remain in fourth, both the chasing pack are edging nearer.

Moise Kean continued his fine goalscoring form to hand Juventus a narrow 1-0 victory over Empoli. Without the injured Cristiano Ronaldo and Paulo Dybala, the latter picking up a calf problem in the warm-up, it was left to Kean to fire home the winner with 18 minutes remaining. It was his third goal in three games, having netted in both of Italy’s recent matches, and takes Juventus a step closer to another Scudetto.

At the other end of the table, Bologna picked up a massive three points, with Mattia Destro scoring a 96th minute winner to edge out Sassuolo 2-1. Erick Pulgar’s penalty had looked to be enough for Bologna, but Jeremie Boga levelled the game in the first minute of added time. It was left to Destro to step up and become the hero, with his goal taking Bologna out of the bottom three, two points above Empoli.

Atalanta moved into sixth place with a come from behind win over Parma, eventually triumphing 3-1. Gervinho had given Parma the lead when Mario Pasalic was caught in possession, but Pasalic atoned for his error to make it 1-1 midway through the first half. A Duvan Zapata double after the break completed the comeback, leaving Atalanta just three points outside the Champions League places.

Fiorentina and Torino drew 1-1 in Florence to dent Torino’s faint hopes of making the top four. Both goals arrived before the break, with Giovanni Simeone putting Fiorentina ahead only for Daniele Baselli to equalise. The result leaves Torino six points adrift of the top four.

Udinese picked up a much-needed 2-0 win at home to Genoa to move three points clear of the drop zone. Any nerves were settled inside four minutes when Stefano Okaka opened the scoring, before Rolando Mandragora made the result safe just after the hour mark.

Frosinone slipped to ten points from safety as they fell to a 1-0 loss at home to SPAL. Marco Baroni opted for an unfamiliar line-up, but his surprise selections failed to deliver, as he watched his side lose out to a 13th minute header from Francesco Vicari. Meanwhile, SPAL stay in 15th, but are now four points above the bottom three.

Chievo were on the receiving end of another humbling defeat on Friday night, losing at home 3-0 thanks to a clinical first half display from Cagliari. Goals from Fabio Pisacane, Joao Pedro and Artur Ionita made the second half a procession for the visitors. Fabio Depaoli was shown a red card early on in the second half for Chievo, who have still only won one game all season, leaving them bottom of the league on 11 points.