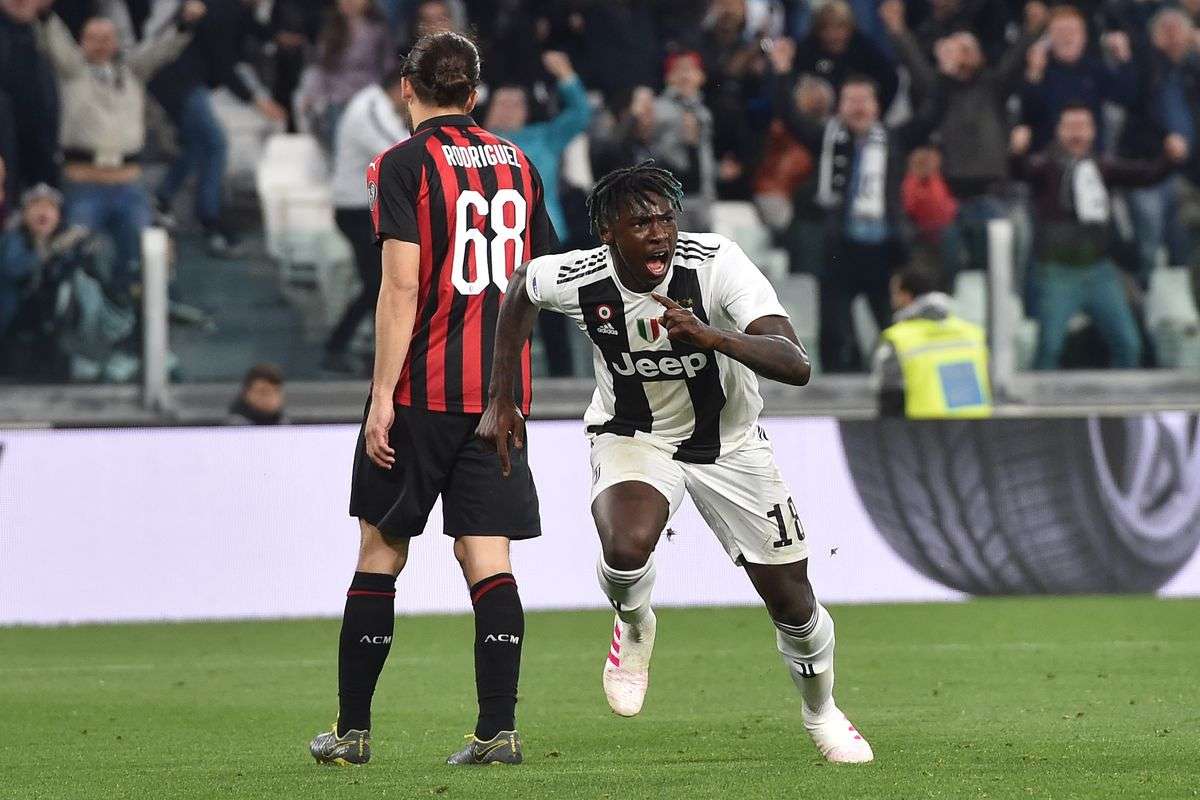 Kean completes comeback as Juve close in on another Scudetto

Moise Kean grabbed the headlines again on Saturday evening as he netted the winner to hand Juventus a 2-1 victory over AC Milan. Having been subjected to racist abuse on Tuesday in Cagliari, the 19-year-old showed maturity and class beyond his years to score his third goal of the week and move Juventus to within a point of an eighth straight league title.

With the league almost wrapped up already, Massimiliano Allegri opted to rotate his squad ahead of Wednesday’s Champions League clash with Ajax. Giorgio Chiellini, Miralem Pjanic and Blaise Matuidi all started from the bench, a move that appeared to hand the initiative to the visiting Rossoneri.

AC Milan, without a win in their last three games, started brightly. Krzysztof Piatek was presented with an early sight of goal when Suso crossed to the back post, but the Polish striker could only guide his header wide. Still, Milan continued to edge proceedings, as Juventus put in a disjointed first-half display, not helped by the sight of Emre Can hobbling off with an ankle problem.

With 39 minutes on the clock, Milan deservedly went ahead. Leonardo Bonucci, widely condemned for his post-match comments following the treatment of Kean on Tuesday night, misplaced a pass to Rodrigo Bentancur. Tiemoue Bakayoko pounced, intercepting the pass before playing in Piatek, who coolly slotted past Wojciech Szczesny. That goal took Piatek level at the top of the Serie A goalscoring charts alongside Fabio Quagliarella.

Juventus showed glimpses of their capabilities in the closing minutes of the half, Mario Mandzukic’s acrobatic effort forcing a sharp reaction stop from Pepe Reina. Milan had the advantage at the interval though after a comfortable first half.

The hosts started the second half with more purpose, yet Milan were holding firm. That is until the hour mark. Bouncci went some way to atone for his first-half error, playing in Paulo Dybala with a well-weighted through ball. The Argentine playmaker still had plenty to do but was abruptly halted by a horribly mistimed tackle from Mateo Musacchio. A penalty was awarded, and Dybala hauled himself up to place his spot-kick down the centre of the goal, making it 1-1.

Sensing that a winner was there for the taking, Allegri threw on Pjanic and Kean for Leonardo Spinazzola and Dybala. Juventus had the momentum, and they made it count with six minutes remaining. Davide Calabria’s wayward pass out of defence was picked up by Pjanic, who played in Kean, with the youngster finishing with ease, firing into the far corner. Unlike his late goal on Tuesday, this strike was met with joy all around the stadium as Kean capped off a fine cameo performance from the bench.

Juventus will wrap up the league on Saturday if they avoid defeat away at SPAL. For Milan, they have lost three of their last four games, and now face a mouth-watering showdown with Lazio next weekend.

Napoli slipped to 20 points adrift of Juventus, as they failed to take advantage of Genoa playing over an hour with 10 men, drawing 1-1 in Naples. Stefano Sturaro was shown a straight red card inside half an hour following a late tackle on Allan. Dries Mertens then put Napoli in front, but Darko Lazovic levelled for Genoa on the stroke of half time. Napoli could not find a winner after the break, and they will now turn their attention to the Europa League as they face Arsenal on Thursday.

Roma joined Juventus as the only winners inside the top ten this weekend, as they saw off Sampdoria 1-0. Claudio Ranieri’s side had not won any of their last three games but got back into contention for the top four when Daniele De Rossi scored the winner with 15 minutes to play. The result sees Roma move to within one point of the top four.

Inter Milan and Atalanta failed to find the net in an intriguing rather than enthralling 0-0 draw at the San Siro. Missing Duvan Zapata through suspension, Atalanta struggled to create much, with Alejandro Gomez missing their best chance when he could not get enough on his close-range effort. Atalanta’s goalkeeper Pierluigi Gollini had to remain alert, producing fine saves on Matias Vecino, Mauro Icardi and Radja Nainggolan to secure his side a point. Inter remain in third, whilst Atalanta are level on points with fourth-placed AC Milan.

Lazio avoided a second consecutive loss, drawing 2-2 as Senad Lulic tapped home a 95th-minute equaliser in Rome to deny Sassuolo. Ciro Immobile’s penalty had opened the scoring, but Sassuolo bounced back quickly through Rogerio and looked to have earned a surprising win when Domenico Berardi made it 2-1 in the 89th minute. Lulic was on hand to level matters though deep into added time, leaving Lazio three points outside the Champions League places with a game in hand.

Udinese rounded off a fine week, beating Empoli to move further clear of the bottom three. Having picked up four points against Genoa and Milan earlier in the week, Udinese had to battle from behind twice to overcome their opponents here. Francesco Caputo and Rade Krunic twice put Empoli ahead, only for Rodrigo De Paul to respond on both occasions, before Rolando Mandragora completed the scoring in the final minute of the first half. Marvin Zeegelaar was sent off with half an hour still to play, but Udinese held on to move four points clear of the drop zone.

Bologna climbed out of the bottom three with a comprehensive 3-0 win over bottom side Chievo. After struggling to break the deadlock, Bologna eventually got their breakthrough in the 65th minute through an Erick Pulgar penalty, and the same player repeated the trick just three minutes later to double Bologna’s lead. Mattia Bani was given his marching orders for Chievo with 11 minutes left before Mitchell Dijks rounded off the scoring. Bologna are now two points above 18th placed Empoli.

Frosinone stunned Fiorentina 1-0 in Florence to keep their faint hopes of survival alive. Having looked destined for the drop after their home defeat to SPAL last weekend, Frosinone found a 103rd-minute winner in midweek against Parma and built on that result here. Daniel Ciofani’s perfectly placed volley 6 minutes from time ensured that Frosinone remain in the fight with seven games to go.

Cagliari took a significant step towards safety on Sunday afternoon, beating SPAL 2-1 to move up to 12th in the table. Paolo Farago gave Cagliari an early lead, with Mirko Antenucci equalised from the spot in the 18th minute. It was left to Leonardo Pavoletti, Cagliari’s top scorer, to head home the winner for a Cagliari side that have now won four of their last six matches.

Torino’s hopes of a top-four finish were dealt a blow as they had to settle for a 0-0 draw at Parma on Saturday. Despite Parma missing a number of key players, with Bruno Alves, Gervinho and Roberto Inglese all injured, Torino were unable to find a breakthrough. They sit three points outside the top four following the weekend’s results.