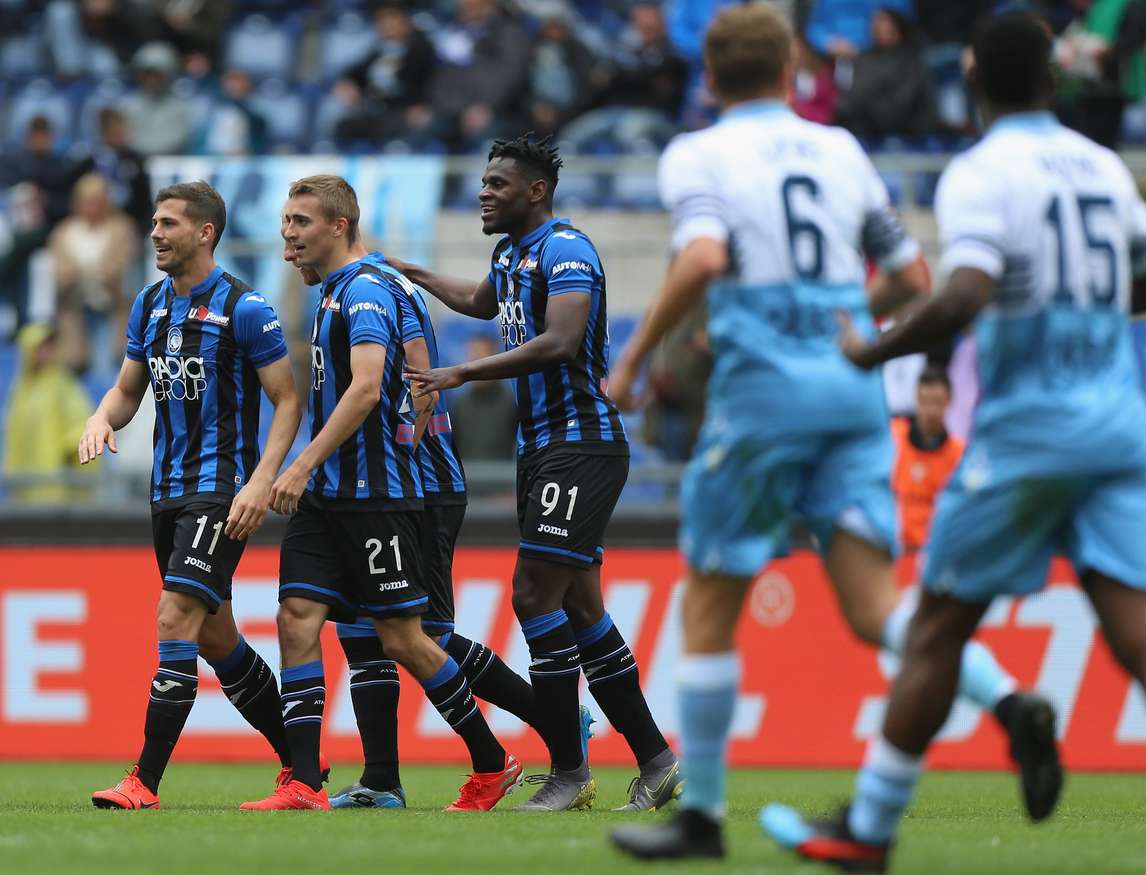 Atalanta’s fairytale season continued on Sunday afternoon when they came from behind to beat Lazio 3-1, moving three points clear of the chasing pack. Marco Parolo had given Lazio a 3rd minute lead, but Atalanta showed their mettle once again to turn the game around with goals from Duvan Zapata, Timothy Castagne and a Wallace own goal.

Atalanta were boosted by the return of Josip Ilicic, the Slovenian attacker who has been one of their star performers in recent months. He could only watch on though in the early stages as Lazio went in front. Felipe Caicedo was a nuisance in the box, and the ball dropped to Parolo who stabbed the ball into the far corner with his left foot.

Needing a win to remain in the hunt for a top four berth, Lazio pushed forwards in search of doubling their advantage. Ciro Immobile manufactured a chance for himself, forcing a flying save from Pierluigi Gollini. Atalanta were struggling to gain a foothold in the contest.

Yet slowly but surely, Atalanta did start to assert their authority, and in the 22nd minute they were level. Alejandro Gomez and Remo Freuler were wayward with their shooting, but Freuler’s shot fell into the path of Zapata, who adjusted his feet before calmly placing the ball into the corner of the net. Indeed, Atalanta could have been ahead at the break had Ilicic showed more composure when played through on goal. Instead, the forward snatched at his shot, dragging it comfortably wide of the post.

After a slow start, Atalanta had hit their stride and could have been ahead inside the opening minute of the second half. Ilicic held off his man before clipping a right foot strike towards the goal, only to see Thomas Strakosha produce an excellent reflex save.

It was Atalanta who were well in control now, regularly pushing the hosts back. In the 58th minute they got their reward. Lazio defender Wallace dawdled on the ball and gave it away to Gomez who ran through on goal. It seemed that he may have wasted the opportunity as he stuttered when confronted by the goalkeeper, but he regathered his composure to set up Castagne who fired home from the edge of the area.

A tense final half hour looked set to unfold, but it did not materialise. Atalanta showed admirable organisation at the back, whilst remaining a threat in the final third, and 14 minutes from time they gave themselves a two goal cushion. Gomez’s corner appeared to have been headed home by Berat Djimsiti, yet on second viewing it was confirmed to have been nodded into his own net by Wallace, rounding off a miserable second half for the Brazilian.

Lazio never looked like mounting a fightback, as Atalanta enjoyed the closing stages in the Rome rain. Atalanta are now just a point behind Inter, potentially eyeing up a push for 3rd, whereas Lazio stay 8th, and look to be battling for a place in the Europa League going into the final three matchdays.

AC Milan survived a late comeback attempt from Bologna to claim just their second win in eight league games, moving up to 5th after securing a 2-1 victory. Goals from Suso and Fabio Borini had looked to have put Milan on course for a routine win, but Mattia Destro struck in the 72nd minute to cut the lead in half, and Lucas Paqueta’s red card two minutes later set up a nervy finish. Bologna were unable to find an equaliser though, with Nicola Sansone and Mitchell Dijks being given their marching orders after the final whistle.

Cristiano Ronaldo rescued a point for Juventus in the Turin derby which ended 1-1 on Friday night. Torino went ahead in the first half when Sasa Lukic capitalised on a Miralem Pjanic mistake before slotting his shot past Wojciech Szczesny. It seemed that Torino may hold on for a rare derby win, maintaining their push for a top four place in the process, but Ronaldo headed home the equaliser with six minutes to go following an inviting cross from Leonardo Spinazzola. Torino are now five points adrift of the Champions League places.

Roma’s top four hopes were dented when they drew 1-1 away at Genoa on Sunday evening. Stephan El Shaarawy looked to have given Roma a priceless victory when he netted with eight minutes to go. Yet Genoa responded through Cristian Romero in the first minute of added time, and they could have snatched all three points when they were awarded a last minute penalty. However, Antonio Sanabria’s spot-kick was pushed to safety by Antonio Mirante, meaning Roma are now three points behind 4th placed Atalanta.

Inter Milan produced an underwhelming performance as they drew 0-0 with Udinese on Saturday. Radja Nainggolan and Lautaro Martinez went closest for Inter, but neither could find the finishing touch, with the main talking point being Mauro Icardi starting from the bench for the second time in the last three games. Inter stay 3rd, four points clear of 5th place with three games to go.

Frosinone’s immediate return to Serie B was confirmed this weekend when they could only draw 2-2 with Sassuolo. Needing a win to keep their slim hopes of survival alive, it had seemed that Frosinone may live to fight another day when they took a 2-0 lead thanks to goals from Paolo Sammarco and Luca Paganini. Yet Sassuolo fought back after the break, Gian Marco Ferrari and Jeremie Boga levelling matters to send Frosinone down.

Napoli secured 2nd place after a controversial 2-1 comeback win over Cagliari. Leonardo Pavoletti had given Cagliari the lead after a fine flick into his path from Nicolò Barella. The equaliser came five minutes from time through Dries Mertens, before Fabrizio Cacciatore was adjudged to have handled inside the area deep into stoppage time. Artur Ionita was sent off for protesting the decision, but the delay did not affect Lorenzo Insigne who stepped up to stroke home the match-winning penalty.

Empoli handed themselves a lifeline by beating Fiorentina 1-0 on Sunday at lunchtime. Having lost three of their last four games prior to this match, Empoli scored the only goal of the game in the 54th minute, Diego Farias finding the target. Fiorentina’s Jordan Veretout was sent off after the final whistle on another disappointing afternoon for Vincenzo Montella’s side. Empoli’s victory closed the gap between themselves and 17th placed Udinese to just two points.

Parma fought back from 3-1 down to draw 3-3 with Sampdoria and edge closer to guaranteeing another season in Serie A. Marcello Gazzola’s second minute goal gave Parma the perfect start, only for Sampdoria to hit back through a Fabio Quagliarella brace, taking him to 25 league goals for the season, either side of a Gregoire Defrel strike. Parma refused to lie down though, with Juraj Kucka and Alessandro Bastoni making it 3-3. Kucka and Omar Colley were sent off late on as both sides finished with 10 men.

SPAL earned a crushing 4-0 win over Chievo to ensure that they will remain in the top-flight for another year. Felipe scored twice, whilst Sergio Floccari and Jasmin Kurtic also found the net, stretching SPAL’s unbeaten run to four games.

The Beautiful Game Confronts the Ugly Vice: Racism and the Role of Soccer in Integrating Immigrants into Italian Society