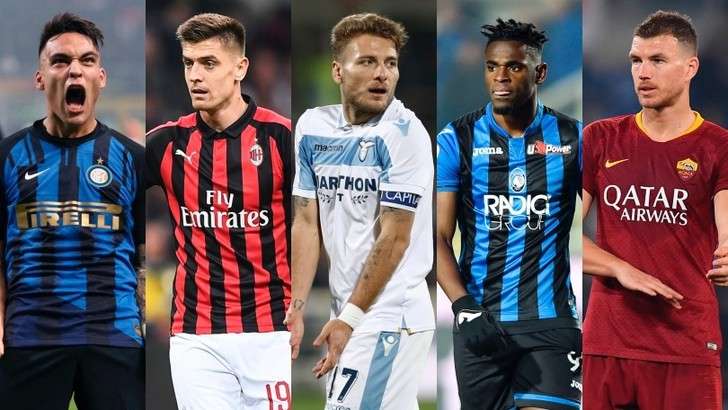 The business end of the Serie A season is approaching. Juventus have already wrapped up an eighth successive Scudetto, whilst Napoli secured another season of Champions League football on Sunday. Yet there remains plenty to play for, as six teams battle for the final two Champions League spots. With four games to go, let’s assess the run-in for each side.

2019 has been a difficult year for Inter so far. The team entered the second half of the season with hopes of pushing for a top two spot, seemingly guaranteed of finishing at least third. It has not panned out that way.

Having failed to win any of their first three games after the winter break, matters got worse when contract negotiations with Mauro Icardi broke down in early February. Icardi was stripped of the captaincy and did not feature again until April 3.

In recent games the side have been stuttering towards a top-four berth, picking up a crucial derby win against AC Milan in mid-March, whilst also suffering setbacks such as a home defeat to Lazio. They do have a small cushion between themselves and 5th place though, and with some favourable games on paper to come, they will still fancy their chances of getting over the finishing line to make the top four.

Since joining the club in 2016, manager Gian Piero Gasperini has been a revelation at Atalanta. Over the next few weeks, his work could receive the ultimate reward as the side go in search of Champions League football and a first Coppa Italia since 1963.

Despite consistently losing some of their best players to rival clubs over the past two years, with Andrea Conti, Franck Kessie and Mattia Caldara joining AC Milan, whereas Bryan Cristante went to Roma, Atalanta continue to show signs of progression. They won just one of their first eight games this season, but have recovered exceptionally well to move into fourth position with four games left.

Gasperini’s men are the joint-highest scorers in the division alongside Juventus, and the team are no longer so reliant on their captain, Alejandro Gomez. Summer signing Duvan Zapata has netted 21 goals, whilst Josip Ilicic has been one of the standout performers in Italy after an injury-hit start to the season, chipping in with 11 goals of his own.

There is still cause for caution for Atalanta fans though. Of the top eight sides, only Roma have conceded more goals than Atalanta, and with away trips to Lazio and Juventus still to come, these defensive flaws may well be further exposed in the closing weeks of the season. Those matches are likely to determine whether they have had a very good season or a great one.

It has been a season of struggle for Roma, who have failed to match their European exploits of last year, whilst also slipping down the table domestically. This cost Eusebio Di Francesco his job back in March, with the club turning to Claudio Ranieri to try and lift them back into the top four.

Ranieri’s tenure did not get off to the best of starts, as he watched his side lose to SPAL and Napoli. However, they are currently on a five-match unbeaten streak, conceding just three goals during that period.

After a season of conceding comfortably over a goal per game, there are signs that Ranieri has found the formula to keeping things tighter at the back just in time. Roma will need to sustain this defensive solidity in the final four games if they are to finish in the Champions League spots, rescuing their season in the process.

The surprise package of this season have been Torino. They have finished 9thin three of the past four seasons, without ever coming particularly close to taking that next step to moving into the European places. Yet this season has been different.

Torino have the third best defensive record in the league this season and have lost just six games, which puts them joint-second with Napoli in that department. At the other end, goals have been harder to come by, as Torino have netted the fewest goals out of any side in the top half. They will need Andrea Belotti to add to his 13 goals for the season if they are to continue their push for an unexpected Champions League place.

No side has been involved in more draws than Torino, with the side playing out 14 stalemates already this season. They will hope that this does not come back to haunt them as they look to cap off a fine campaign.

AC Milan have had perhaps the most inconsistent season of anyone in Serie A. It appeared that Gennaro Gattuso was on the brink of the sack in December when he watched his side fail to score in four consecutive league games, whilst also getting dumped out of the Europa League by Olympiacos. Yet five straight wins in February and March put the team back in pole position for a top-four berth, the clear goal for Milan this season.

However, Milan’s form has been dreadful in recent weeks. They have won just one of their last seven league games and fell at the semi-final stage of the Coppa Italia to Lazio last week. This has left the side 7th in the table, and matters were not helped when Tiemoue Bakayoko turned up to training over an hour late earlier this week, an incident that left Gattuso fuming.

Milan seem to have one of the better run-ins when compared with their rivals, but given their lack of form it would not be a surprise to see them drop more points between now and the end of the season. They are in serious danger of seeing their season fall apart, meaning that they miss out on Europe altogether.

Lazio’s season ended in heartbreak last year when they missed out on the Champions League on the final day. They had their fate in their own hands going into that match, but look unlikely to have that same honour this time around.

Lazio have already lost 11 games this year, two more than any other team in the top eight. Another worry for the team is the drop-off in goals from their talismanic striker, Ciro Immobile. Having scored 23 and 29 goals in his last two seasons respectively, Immobile has scored just 14 this year, with only 4 of those coming since the winter break.

Still, Lazio remain in the hunt, and in Joaquin Correa they appear to have found a suitable replacement for Felipe Anderson, with the Argentinian forward finding his form in the second half of the season. They booked their place in the Coppa Italia final last week and will hope to use that as a springboard to propel themselves into the top four in the coming weeks.

Who has the toughest run-in?

According to the statistics, Atalanta and Lazio have the hardest run-ins, as the average league placing of their final four opponents is 8.75. These two sides face one another on Sunday, and Lazio also have to face Torino on the final day of the season in what could potentially be a decisive encounter.

Using the same method, the two Milan clubs have the easiest set of fixtures to negotiate. Inter face three of the bottom four, and winning those games would suffice in seeing them finish in the top four, without having to worry about their trip to Naples on the penultimate matchday. All of Milan’s opponents currently occupy league positions in the bottom half, so Milan will hope to overhaul the three-point gap between themselves and the top four by beating four sides that they are favoured to overcome.

The race for the top four has been arguably the most exciting storyline in Serie A this season. As we enter the final month of the campaign, those final two spots are still very much up for grabs.