FEATURE | Fabio Cannavaro v Germany, 2006: The story of one of the World Cup’s great defensive performances 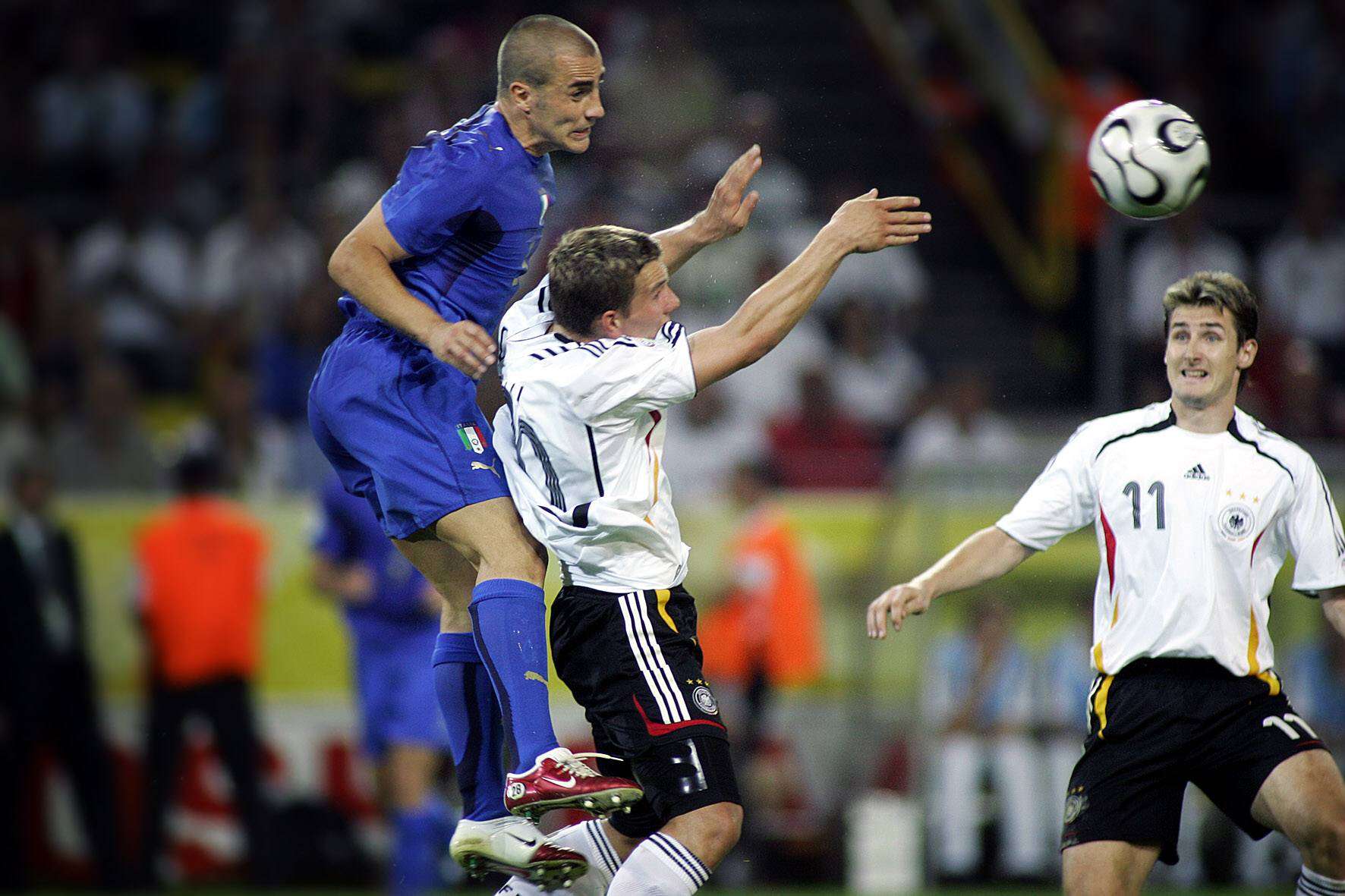 The Westfalenstadion was a mix of stunned silence and buoyant Italian noise as the final few seconds ticked down on the 2006 World Cup semi-final. Host country Germany, having never been beaten at the stadium, had just gone behind in the final minute of extra-time to a stunning strike by Italy’s Fabio Grosso.

A final ‘Hail Mary’ high ball is sent into the Italy penalty area, in a desperate bid to snatch an unlikely equaliser. The cross is met with a decisive header away from the middle of the 18-yard box by Fabio Cannavaro. Like any good defensive header, the ball loops high into the air some 30-yards from goal. Lukas Podolski stands beneath the clearance as it falls out of the summer sky, and in the blink of an eye Cannavaro has made up the 15 yards or so to get on the end of his own clearance and chests the ball away from the German striker.

The Juventus defender seemingly resists the temptation to run the ball the full length of the field himself as he crosses paths with Francesco Totti. Alberto Gilardino then receives Totti’s forward pass, and could simply run to the corner flag in time-honoured ‘running down the clock’ tradition. Instead, the Italian striker makes his way towards the German penalty area as Alessandro Del Piero charges up outside him. Gilardino’s lay-off is weighted to perfection and is matched by Del Piero’s unerring finish into the top corner, it’s the last kick of game and Italy are in the World Cup Final.

It’s rare for a defender to win the Ballon d’or ; only three have done so since the award’s inception in 1956. Germany legend Franz Beckenbauer lifted the trophy in 1972 and 1976 whilst his fellow countryman Matthias Sammer lifted the prize in 1996. Ten years after Sammer took home the gold it was perhaps Fabio Cannavaro’s display in the semi-final in Dortmund that sealed his place in history as the third defender to be named the world’s best player.

Cannavaro’s performance in the Westfalenstadion was arguably one of the best individual defensive performances of all time. That may sound somewhat grandiose but, the stage, the venue, the opponents and what the player put into the game itself set it apart. The impressive semi-final stand came at a tumultuous time for football in his country.

In the heart of the Juventus defence, Cannavaro had made 37 appearances and scored 4 goals in the 2005/6 Serie A season which saw his side finish 15 points clear at the top of the table. It was the defender’s second consecutive title win with ‘la Vecchia Signora’ but both awards were to be stripped from the club. As the Azzurri prepared for the World Cup in Germany the ‘Calciopoli’ match-fixing scandal roared on back home, culminating in Juventus being demoted to Serie B in addition to being stripped of their previous two league titles. The decision to relegate Juventus was announced on the very day of the semi-final, in quite astonishing timing as the national side prepared for its first World Cup semi-final since 1994.

The preparation may not have been ideal, but the performance of the team, in particular captain Cannavaro, was exemplary. As the team lined up for the pre-match anthems he exuded an air of calm self-assuredness. In the world of centre-backs the Neapolitan could be described as diminutive at five-foot-nine but he more than made up for that lack of height.

Twice in the opening twenty minutes of the match Germany were denied clear chances to take the lead by the defensive brilliance of the former Parma and Inter man. There were 15-minutes on the clock when Miroslav Klose cushioned the ball down in the box and into the path of striker Lukas Podolski. The German was in on Gianluigi Buffon but his glorious opportunity was snatched from him as Cannavaro arrived from his blind-side like an express train to lunge in with a perfectly timed last-ditch tackle.

It was the first of many duels lost by Podolski to Cannavaro in a game which surely still haunts the dreams of the striker. Just 5 minutes after the first chance was snatched from him, Podolski found himself in behind Marco Materazzi and Fabio Grosso with a clear run on Buffon’s goal. Cannavaro had other ideas, as he read the pass perfectly in order to get across and cover for his defensive team-mates with another timely clearance.

It was clear from the early stages that Cannavaro was very much in the mood to shut out his opponents in what had become a very open game. Many an Italian passing move began with Andrea Pirlo dropping deep from midfield and collecting a pass from Cannavaro.

As the game wore on it was clear that Cannavaro, whether on the instruction of his manager Marcelo Lippi or not, was engaging with the German strikers early before they could get into the penalty area. This is arguably where he was at his best, his ability to read the game combined with his speed of thought meant that the German strike duo were being dispossessed almost before they knew they were in possession.

The captain never looked under pressure at any point in the game, despite some threatening moments from a German side desperate for success on home soil. Grosso’s dramatic yet sublime goal and impassioned celebration had stolen the headlines and sent Italy to the final, but the captain had one final mark to make on the evening. His contribution to Del Piero’s goal in many ways summed up his entire performance, perhaps his whole season. The determination to defend his goal, the athleticism to better taller players in the air, the ability to read the play as if he was seeing things a split second before everyone and his textbook decision making.

In winning the Ballon d’or, Cannavaro became the first Italian to receive the award since Roberto Baggio in 1993 as he edged out his team-mate Gianluigi Buffon into second place. One game cannot be enough to crown a player as the best in world, but Cannavaro’s performance that night in Dortmund was at such an elite level that it probably sealed the deal for him. It would have been criminal had the Italian captain been on the losing side that night but the way he defended, losing was impossible.

Cuadrado on Juventus players’ pay cut: “Hopefully we serve as an example for the others.”