FEATURE | On this day in 2010: When José Mourinho’s Inter ruled over Europe 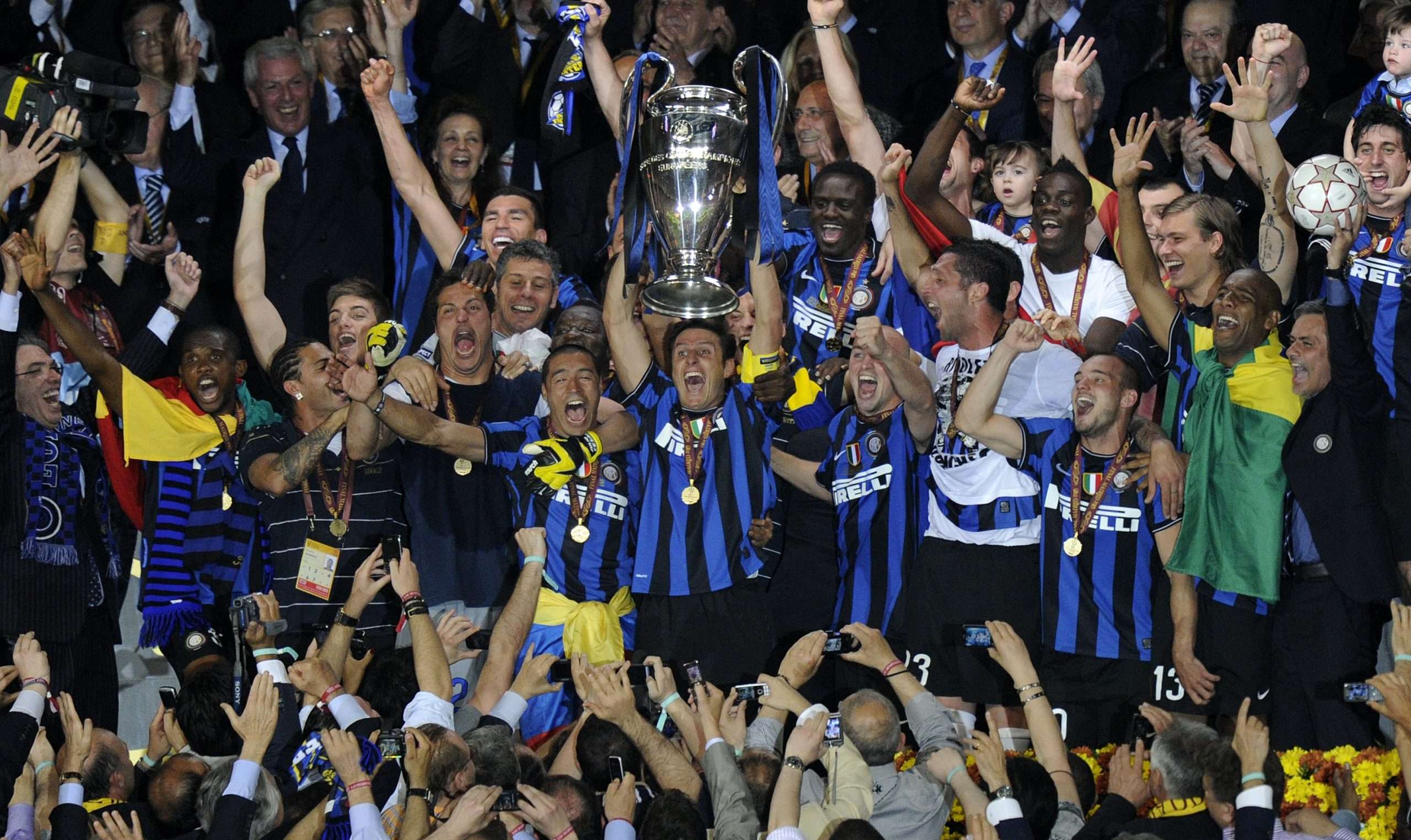 Saturday May 22nd, 2010. Diego Milito is leaving the field as slowly as possible, saluting Inter’s adoring fans as he goes, knowing that he has played a match-winning role in the Champions League final. With the game deep into added time, and the score at 2-0, it was clear that the contest was over. This was a moment for everyone connected to Inter to savour.

The 2009/10 season is one that Inter supporters will never forget. It was the first time that the side had completed the treble, winning both domestic trophies on offer and Europe’s biggest prize.

Ten years on, it appears fitting to reflect on how they did it. From Mourinho having the last laugh against his former clubs, to players adapting for the good of the team, this is the story of how this unfancied group of players took Inter to their third European Cup.

The Road to the Final

It could have been so different. Going into the final group game, Inter and Russian side Rubin Kazan were level on points, with either side needing victory to seal their place in the knockout stages. As would be the case in the latter stages of the competition, Inter kept their cool, with Samuel Eto’o and Mario Balotelli wrapping up a comfortable 2-0 win.

However, Inter had finished second to Barcelona, meaning that they now faced a tricky last-16 clash against Chelsea. Facing his former side for the first time since his departure, Mourinho had a tough task on his hands to overcome the favoured London club. You could never write off a Mourinho side, though. Especially this Inter team.

After edging out the home leg 2-1, Inter travelled to Stamford Bridge with the tie in the balance. A 1-0 win would suffice for Chelsea – the problem for them was that they would have to breach the most resolute defence around. They would not manage it. Instead, Eto’o latched onto a delightful through ball from Wesley Sneijder 12 minutes from time, and fired his shot home to take Inter into the quarter-finals.

There, they would meet CSKA Moscow. In a largely forgettable tie, Inter picked up a pair of 1-0 wins, booking their place in the last four. It was now time for the rematch against Barcelona. The Spanish giants had got the better of their Italian counterparts in the group stages, but this was where it really mattered.

Barcelona were the clear favourites. They had lifted the trophy the previous year, and had assembled arguably the greatest squad ever. Yet for Mourinho, this was personal. The Portuguese manager had been on Barcelona’s books in the late 1990s, first as an interpreter and then as an assistant coach. Mourinho appeared close to a return to the club as head coach in 2008, only to be pipped to the post by Pep Guardiola. Now was his chance to prove that Barcelona had made the wrong decision.

This was a contest that was destined to be mired in controversy from the start. Even before the first leg, Barcelona’s preparations were hampered when volcanic eruptions in Iceland created an ash cloud which affected air travel. This forced the Catalan club to make their way to Milan by bus. Hardly ideal ahead of such a big game, and Inter took full advantage, recovering from an early deficit to win the game 3-1.

Heading to the Camp Nou, there were still many who expected Barcelona to turn things around. With the prospect of the final being at the home of their bitter rivals Real Madrid, it seemed to be written in the stars that Barcelona would complete the comeback. Unfortunately for them, Mourinho and co. were very much set on spoiling the party. It was to be a drama-filled match.

Barcelona dominated in possession and shots on goal – Inter did not manage a single effort in the game. Thiago Motta was sent off in the first half, somewhat harshly. Still, Inter would not be denied. The hosts huffed and puffed, and eventually got one goal with six minutes left through Gerard Pique, who seemed to be offside, but it was too little, too late.

As the final whistle blew, Mourinho charged onto the pitch. He had well and truly delivered on the big stage once again. He would later describe that game as “the most beautiful defeat of my life”. It is easy to understand why. Against all the odds, Inter had made the final.

Just a week after overcoming Barcelona, Inter went for their first major trophy of the season. The team faced Roma in the final of the Coppa Italia. The game was settled by a single goal, with Milito scoring shortly before half-time. Part one completed.

Eleven days later, and it was time for the league to be decided. Once again, the two teams in the running for silverware were Inter and Roma. Once again, it was Inter who would triumph. Once again, it was Milito who produced the goods. With Inter holding a two-point lead going into the final round of fixtures, Mourinho’s men still needed to win at Siena to complete a domestic double. It was left to the Argentinian once more to net the decisive goal in the 57th minute. Now, Inter could set their sights on Madrid.

No Italian side had ever won a treble. Inter had not won the European Cup in 45 years. Greatness beckoned.

Standing in their way were Louis van Gaal’s Bayern Munich. To look back on that Inter side now, the line-up for the final looks a little strange. Did Mourinho really play three strikers? Well, yes he did. Only they did not all play as strikers.

Milito was the focal point of the attack, whilst Eto’o and Goran Pandev operated from the wings, putting in tireless displays to help out defensively, and then getting forwards when they could to join in attacks. They had been forced to adapt to Mourinho’s preferred system, and had done so admirably. It did not matter that they were not in their favoured positions. By this stage they knew their role in the team, ensuring that the side kept its shape at all times.

Inter’s tactics were relatively simple to understand. Defend deeply, with a rigid back four spearheaded by Walter Samuel and Lucio, with two holding midfielders in Javier Zanetti and Esteban Cambiasso just ahead of them, and then use the likes of Sneijder, Eto’o and Milito to hit Bayern on the counter-attack. They worked to perfection.

The first goal arrived ten minutes before the interval. Milito headed the ball down to Sneijder, ran into space to receive the return pass, and then lifted the ball beyond Hans-Jörg Butt and into the net. As easy as you like, and now Inter had something to hold on to.

Bayern had their moments. Júlio César had to produce an important save to keep out Thomas Müller in the second half, but there was always the feeling that Inter had the upper hand. With 20 minutes remaining, they put the game to bed. Eto’o fed the ball to Milito, who was left in a 1 v 1 situation against Daniel Van Buyten. The Argentine striker shaped to shoot, before dancing around the defender and slotting the ball into the far corner.

The rest of the match passed with little further action. Inter had done it. The treble was theirs.

There were emotional scenes at the final whistle, and not just because of Inter’s on-field achievements. This was to be Mourinho’s final game in charge of Inter. Just nine days later, he was unveiled as the new manager of Real Madrid.

The average age of Inter’s starting line-up in the Champions League final had been just a touch under 30. Mourinho had got everything he could out of a vastly experienced squad, but it was always likely that the ageing group would start to decline shortly after his departure.

Inter had just won their fifth straight Scudetto, but that run was to end in 2011 when their cross-city rivals AC Milan pipped them to the Serie A title. The team did manage to stick around together long enough to win the 2011 Coppa Italia, but that remains their last major trophy.

Since Mourinho, 12 managers have come and gone, with just a single trophy between them to show for their efforts. Now on to their thirteenth in Antonio Conte, there is hope that a return to the glory days may not be too far away.

Yet for now they have the memories of 2010 to look back on fondly. It was the season when it all came together for the Nerazurri. The season when Mourinho, Milito and Sneijder were all at their absolute peak. The season when Inter created Italian football history.

Italian FA establishes Serie A, B and C can go ahead, to be completed before August 20