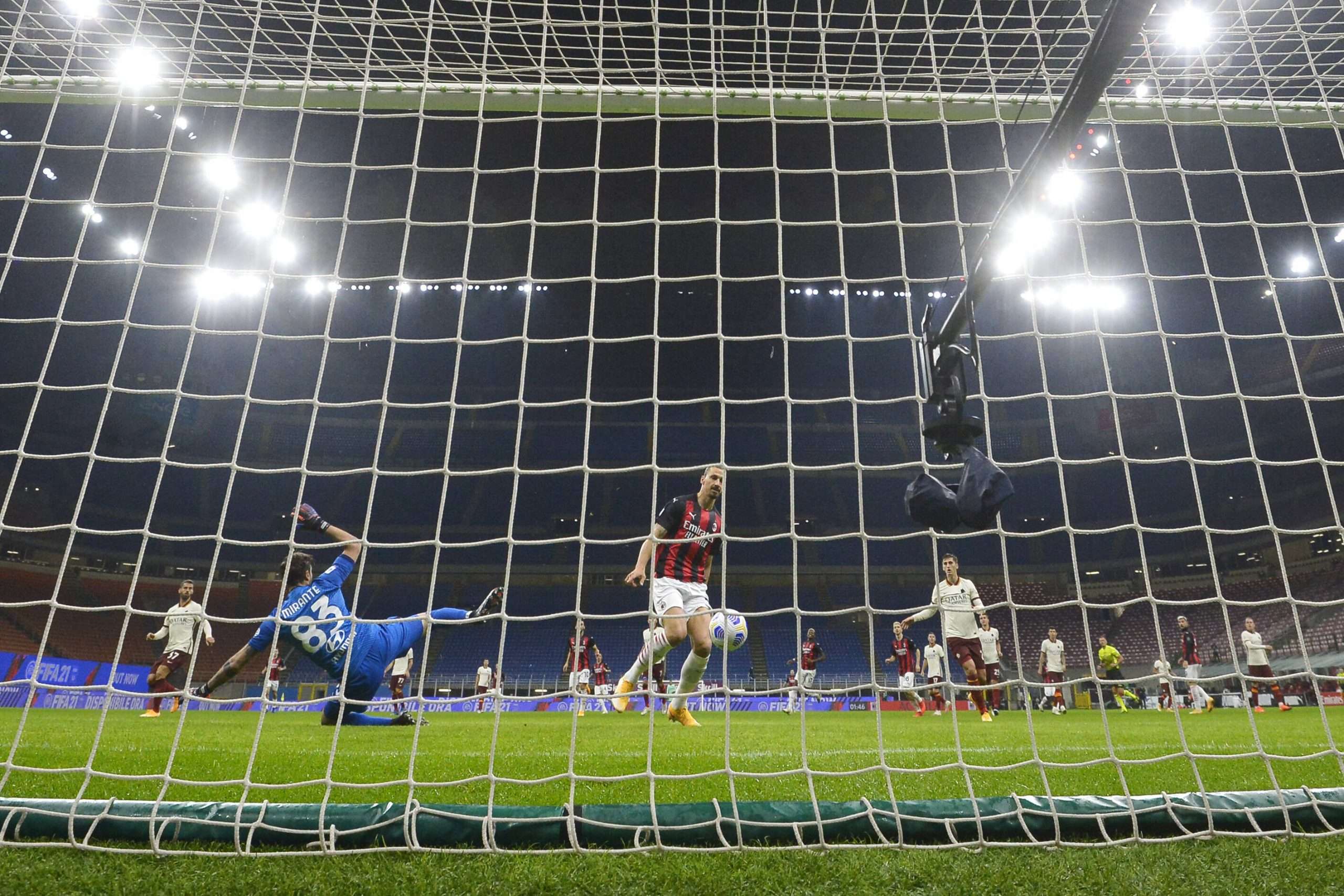 AS Roma visited the San Siro on Monday evening to play league leaders AC Milan, in the final fixture of Matchday 5. The Rossoneri have shown great form to start their season, as they have won four straight Serie A matches. In the end, a late goal from Marash Kumbulla earned Roma a 3-3 draw and ended their five-game winning streak.

It just took two minutes for Milan to score first. Rafael Leão did a great job to cut inside and beat Rick Karsdorp in midfield. Then, he crossed the ball towards the Milan goal which went over Kumbulla and found its way precisely in front of Zlatan Ibrahimović. The forward was well positioned to bring down the ball and beat Antonio Mirante.

Roma tied the match shortly afterwards, as Eden Džeko scored a header off a corner kick. Goalkeeper, Ciprian Tătărușanu mis-timed his jump, and was out of position which led to the Giallorossi’s first goal.

At the start of the second half, Milan once again scored within the first two minutes. Leão won possession in midfield and advanced down the left flank to beat out Karsdorp once more. He then passed the ball into the goal area to Alexis Saelemaekers, who was left unmarked and converted his shot to beat Mirante.

Leão was clinical and decisive throughout the match and finished with two assists, two key passes and completed three take-ons from the midfield.

“I spoke quite clearly to Rafa this week. I told him what I expect from him and I am very happy with his performance,” Stefano Pioli said of Leao.

With under twenty minutes remaining, Roma were awarded a penalty. The ball was loose in the Milan goal and Ismaël Bennacer and Pedro each made an attempt, with the latter fouling Bennacer, yet the call went the other way. Jordan Veretout converted the ensuing penalty to tie the match.

It took less than ten minutes for another penalty to be awarded, yet this time it was in Milan’s favour. Gianluca Mancini made the slightest contact on Hakan Çalhanoğlu in the box. Ibrahimovic converted to score his second goal and give Milan their third lead.

These were two questionable decisions made by referee Giacomelli which left many puzzled. Both calls could have been reversed with the use of Video Assistant Referee (VAR), and make many wonder why it was not used on these occasions. Fortunately, these two penalties cancelled each other out.

“I go home satisfied with the performance but we do not have to look at the table. We can’t hide it, at the end of the game the players were not satisfied,” Pioli said.

“We played against a strong opponent. They used set pieces better than us but this is the right way, this performance gives us further convictions.”

Prior to added time, Kumbulla scored off a corner kick and tied the match once more. Ibrahimović did a poor job on his attempt at a clearance, as he used his foot to stop the ball from going into the goal area. It ricocheted off his foot and went towards Kumbulla who headed the ball and scored. It was an ill-advised move from an experienced forward, and cost them three points and ended their four-game winning streak.

Nonetheless, it was a hard-fought tie between both sides. Milan are off to a great start this season as they have yet to lose in all competitions –  overall, since Pioli has been hired as Milan’s manager, they have shown great form. As for Roma, after a rough start to their campaign losing two straight (one being a forfeit) they have followed up with three wins and two draws in all competitions.

“It was an even game, we started by conceding a goal but we reacted well and with courage,” Paulo Fonseca told Sky Sports.

“It’s not what I wanted, because I wanted to win. But after everything that happened, after being under three times, I think it’s a positive result.”

All quotes taken from www.football-italia.net

Andrea Pirlo ahead of Barcelona clash: “It’s not a decisive game, but we want to see what our worth is.”