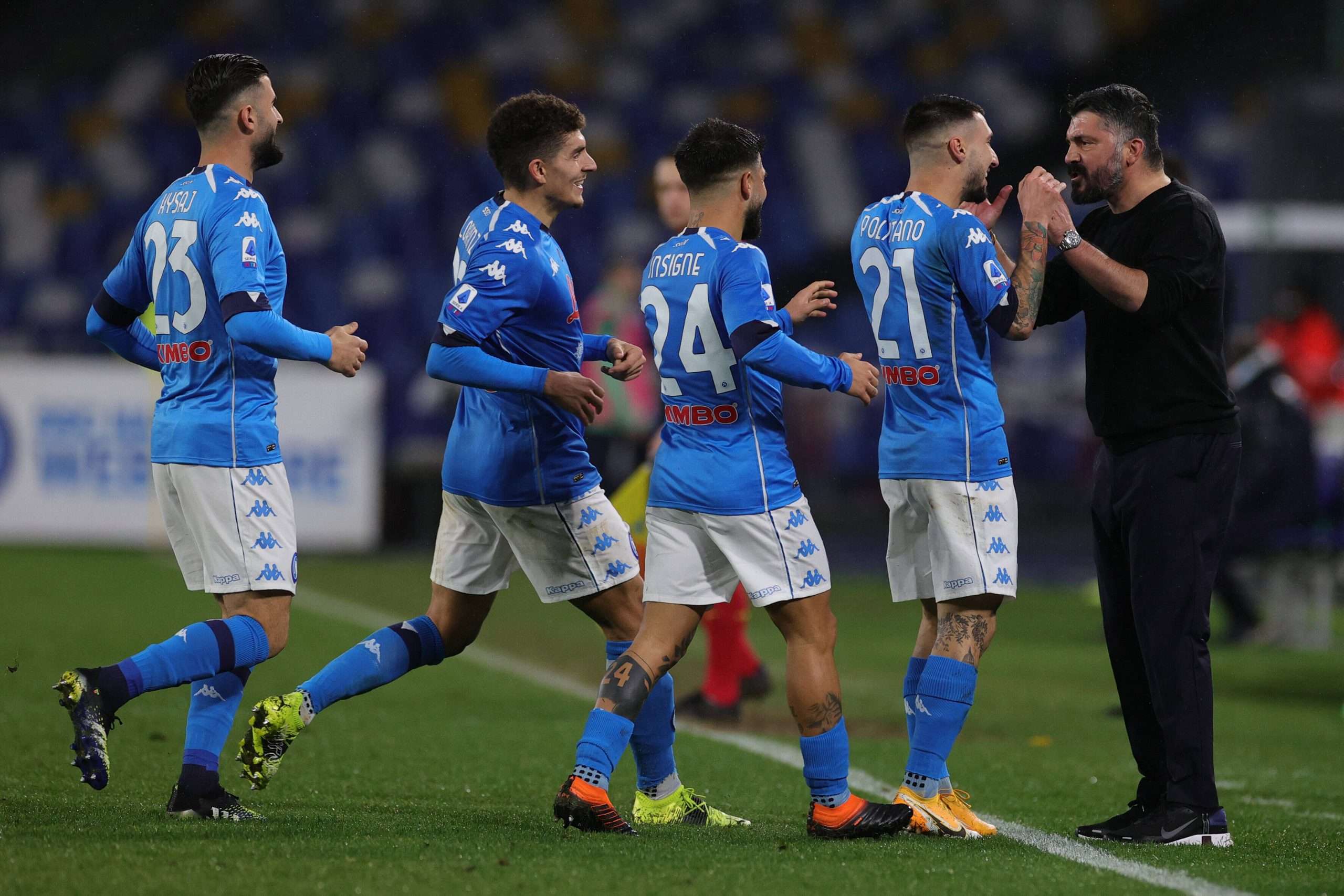 At the beginning of December, Napoli’s sporting director Cristiano Giuntoli spoke to Sky Sport right before the Europa League game against AZ Alkmaar, giving the ultimate confirmation of what at that moment was the worst kept Pulcinella secret – the Italian equivalent of an open secret – that Gennaro Gattuso was going to sign a new contract with Napoli.

“I know that lawyers are exchanging documents – he said – We’ve come to an agreement. I don’t think that there will be problems”.

Two months have passed and it’s almost certain that Gennaro Gattuso won’t be Napoli’s coach next season. He was supposed to sign a two-year extension with a €2,5 million salary per year; now he’ll be lucky if he manages to save his job until the end of the season.

What went wrong? It’s hard to point to just one element. It’s more of a mix of bad results, bad luck, injuries and players testing positive for Covid-19, combined with a president who has the tendency to run the business only in his own way, without any compromise.

Napoli sit in sixth position with one game in hand and just one point behind AS Roma and Lazio. They’re perfectly in line with their season target, which is to finish in the top four and earn a spot for the next Champions League, but this doesn’t seem to be enough for Gattuso to avoid critics.

That’s because Napoli have lost seven games since the beginning of the season and have been beaten three times in Serie A in 2021, losing at home to Spezia and away to Hellas Verona and Genoa.

Those nine points mark the difference between a situation where Napoli could have been in full control of their destiny, chasing AC Milan at the top of the table, and a situation where mistakes are no now longer allowed and every point lost makes things harder even to get qualification for Europa League or for the brand new UEFA Europa Conference League.

Finishing the season in fourth place is not a problem, but the journey needs to be exciting in order to justify a third consecutive season without being a real Scudetto contender. This feeling is emphasised by the fact that Napoli have lost three of the four games they have played against teams in front of them in the table (Milan, Inter and Lazio).

As of right now, it seems that ambitions are gone, probably a little bit too early, and Gattuso only has to limit the damages in order to avoid a disaster. But If you speak to him, he’ll tell you that Napoli have the potential to complete the task and that they didn’t deserve to be in this situation, as many defeats came because of bad luck.

Against Spezia, Napoli attempted 28 shots overall, 11 on goal, while Vincenzo Italiano’s side took the three points with just four shots on goal. Against Genoa, Napoli had 68% of ball possession, hit the bar with Andrea Petagna and the post with Lorenzo Insigne, had 24 shots overall, 11 on goal, but they lost the game anyway as Genoa scored two goals with their only two shots on goal, both taken by Goran Pandev.

Napoli deserved to win both games, but they came out with nothing in their hands. And who knows how the narrative would have changed if Lorenzo Insigne had scored the penalty he missed against Juventus in the Supercup final they lost 2-0.

Injuries are not helping Gattuso either. Victor Osihmen, the most expensive signing in Napoli’s history, dislocated his shoulder in early November and only managed to get back on the pitch in late January as he tested positive for Covid-19 too, once he got back from Nigeria during Christmas time.

Dries Mertens, Napoli’s record goal scorer, is having some troubles too. He suffered a sprained ankle in late December in the clash against Inter and forced his recovery in order to be fit for the Supercup. He played 18 minutes in that game and a pocketful in the next three games before he got injured again on the same ankle against Spezia in Coppa Italia on January 31st. To add to the bad luck, when he flew to Belgium for his treatments, his private plane slid off the runway while landing at Deurne airport in Antwerp.

Kostas Manolas got injured last Saturday against Genoa and has been ruled out for three weeks because of a sprained ankle. Terrible news for Gattuso, who the day prior had found out that Kalidou Koulibaly, alongside Faouzi Ghoulam, has been tested positive to coronavirus.

We’re talking about four regular starters who have missed, or are going to miss, several games during a crucial phase of the season. Put any coach in this kind of situation and he’ll struggle to get results. But this scenario recently didn’t stop president Aurelio De Laurentiis from calling his old employee Rafa Benítez to see if he was willing to get his old job back. To make things worse, he let the press know it. A move that has exposed Gattuso in a moment when he needed full protection from his club.

The relationship between the two had started on a good note, as Gattuso won the Coppa Italia but most importantly managed to restore the peace in the dressing room after the mutiny against the board when they ordered an in-season training camp, and the following decision from De Laurentiis to fine the players up to 50% of their monthly salaries. A dramatic moment that culminated in Carlo Ancelotti’s firing.

Then things fell apart. The negotiations for the new contract have gone back and forth for quite some time. De Laurentiis pushed to include a clause that would have forced Gattuso to pay a €7 million fine as compensation in case he would have terminated the contract prematurely. Gattuso, instead, didn’t want it. He wanted to be free and believed that his word was worth more than any clauses.

On October 31st 2020, as reported by Repubblica, they found a verbal agreement during a lunch meeting but while Gattuso thought that was the end of the negotiations and that he would have signed the new contract in a matter of weeks, if not days, De Laurentiis took a little more time and didn’t send the papers until the beginning of December, once the team locked the qualification for Europa League last 16.

Gattuso took it personally. The verbal agreement for him was worth an obligation, a commitment to the club so strong that he refused to listen to offers from any other club. He believed he was put under exam for no particular reason. That’s why, before signing the contract in December, he asked the president to provide new assurances about the technical project. Assurances that he never received.

“I’ve always had a great relationship with De Laurentiis but I can’t deny that I’m disappointed with what happened in the last 15-20 days. I’m not comfortable with what’s going on. Every day I’ve been taking hits. I can’t work in this way”, Gattuso said after the game against Parma on January 31st, well aware that there would be no way back from those words.