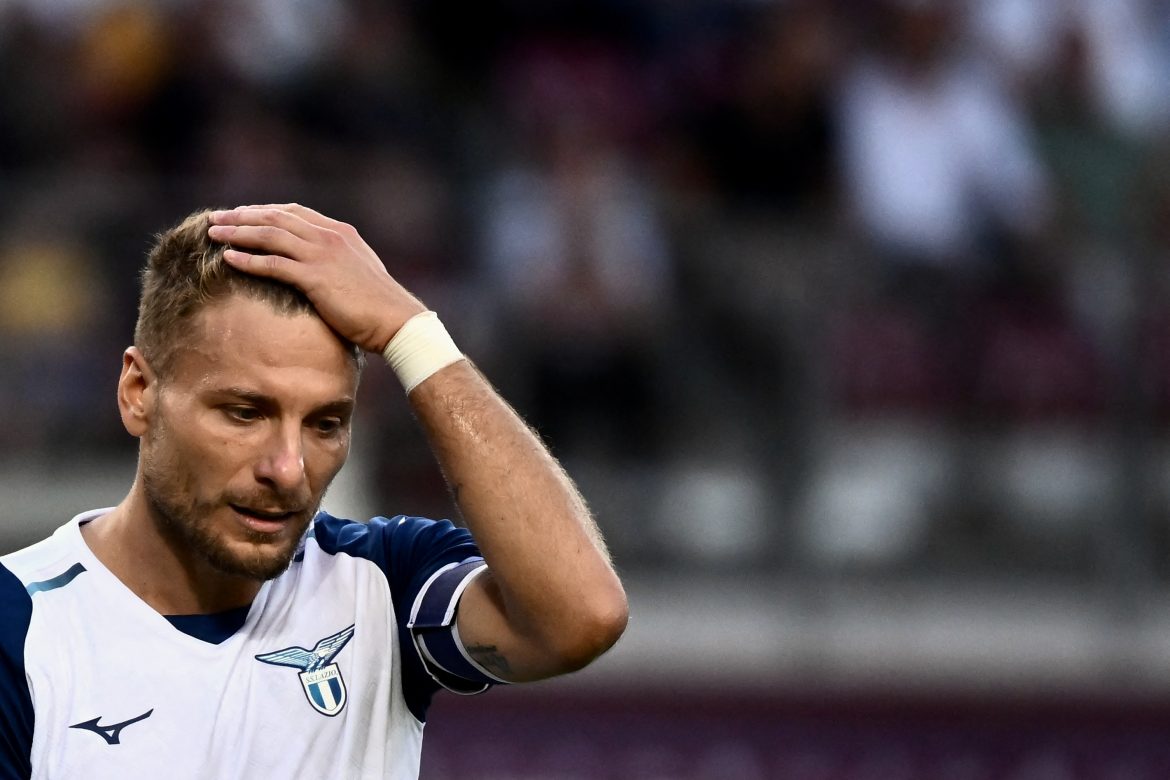 Following Ciro Immobile’s recall from the Azzurri by Lazio, Jerry Mancini assesses the striker’s importance for Maurizio Sarri’s side.

It was a scenario that Lazio striker, Ciro Immobile, didn’t draw up or envision during the national break with Italy. The Italian missed Italy’s first game versus England due to a muscle injury. Although he was expected to feature in their second match versus Hungary, that didn’t come to fruition.

Lazio president, Claudio Lotito, requested for Immobile to return early from international duties. He was concerned that the forward was being rushed back into action too soon and wanted to prevent further injury. This decision has left Immobile disappointed and upset as the past few months have been difficult for him with the Azzurri.

If Immobile had played in this match, it could have helped restore some confidence in his game with the national side. He has not scored for Italy since the Euro 2020 group stage win versus Switzerland back in June of last year. Italy remains at heart for Immobile as he looked to regain form in his game and become a key part of the team for the foreseeable future.

However, this was a decision made by Lazio that will be key for the club moving forward.

Lazio don’t have a proper backup option to Ciro Immobile

Lazio had a successful summer transfer market as they addressed several areas which needed improvement. In previous seasons, the backline has been a glaring issue as they lacked depth and quality. The club signed Alessio Romagnoli, Nicolo Casale and Mario Gila, with all three players already making an impact in the backend and contributing to several wins.

The midfield has improved with the signings of Matias Vecino and Marcos Antonio. The former has proven to be a good option to be called upon off the bench as he’s offered stability in defense. In addition, they signed Ivan Provedel, who has been a significant upgrade in goal. His performances this season earned him his first call-up with the Italian national team.

Yet, one position that Lazio once again failed to address was the number nine. This upcoming winter transfer market, Lazio need to sign a backup striker in the event that Immobile picks up a significant injury.

Immobile has logged over 3000 minutes in each of the past six seasons. He has been the primary striker for Lazio as he’s provided the bulk of their offense. However, at 32 years old, injuries are starting to become a concern. He still has a few good years left in him but managing his minutes would be wise.

Immobile continues to be an elite striker for Lazio, however, depending solely on one player in this position is a significant risk that could hurt the club and this was the case last season. When the Italian missed time, Lazio used Pedro and Felipe Anderson yet neither player impressed in his absence and didn’t offer the same spark. Finding a natural striker who could slot in as a number nine and not have to play out of position would be the better option.

Lazio don’t have a proper backup option until January

From October to mid-November, it will be hectic period for Lazio. The Roman side will play a span of 12 matches between Serie A and Europa League. The transfer market doesn’t open until January and this will be a true test to how Lazio deals without a backup striker to Immobile.

Immobile has played in all seven Serie A matches and is yet to miss a minute. He has started in all their matches and the only matches where he’s been subbed off were in the Europa League. The international break should provide a reminder that rotation is required in order to have their captain available for the next two months.

Playing players out of position or against weaker competition should be two options to be considered. A healthy Immobile will be vital otherwise it could be a long two months for Lazio. This was a situation that could have been avoided in the summer yet now needs to be considered this winter.