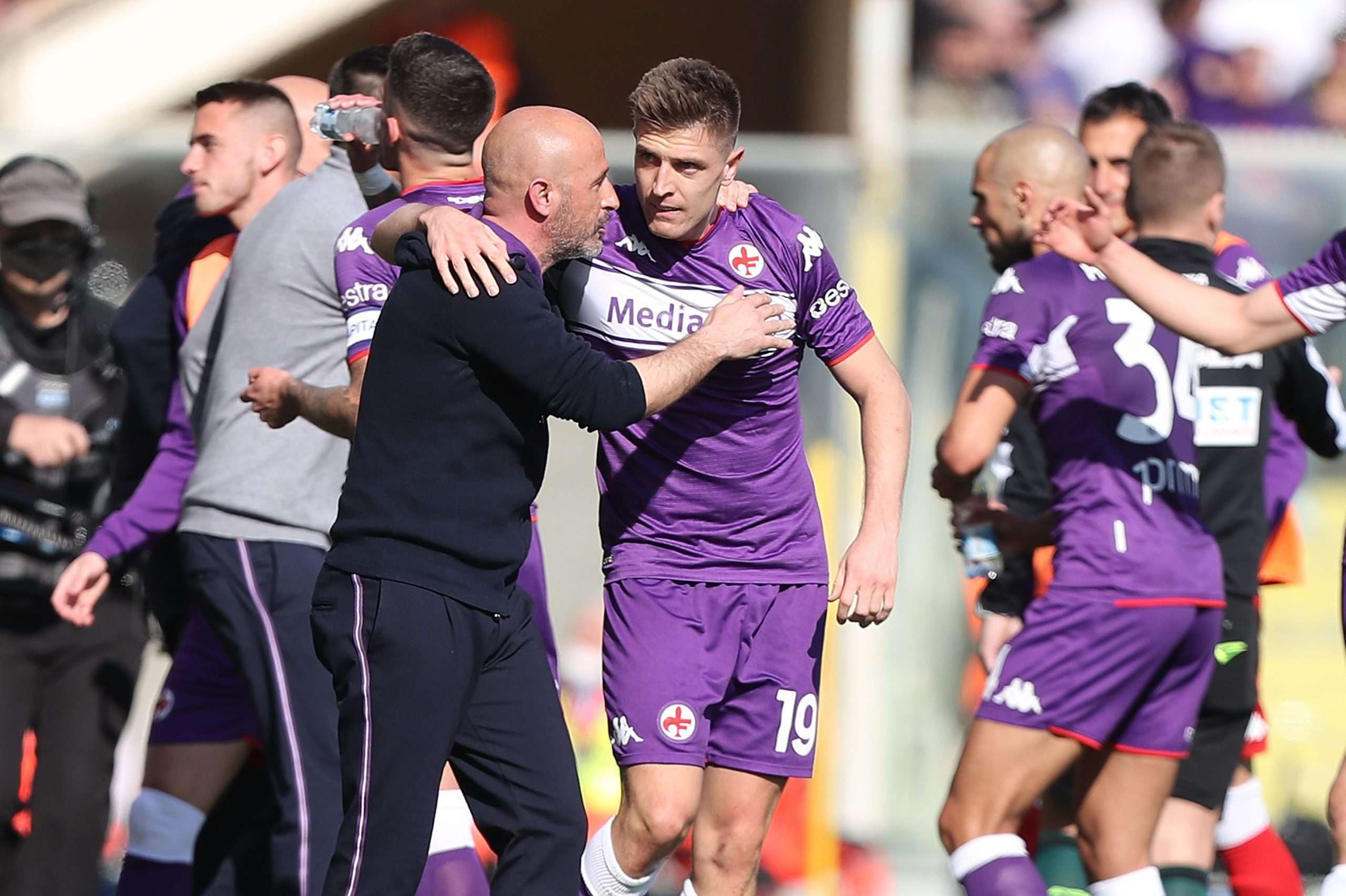 Following Fiorentina’s 1-0 win over Atalanta in a tight Serie A game, Ryan Gunness tactically analyses the game which reduced the gap between the two sides.

Sunday’s clash between Fiorentina and Atalanta saw a defensive clinic by both sides disguised as a cagey affair. In the end, it was one lethal team move by Fiorentina which earned them a 1-0 victory at home. What were the dynamics behind this?

On Sunday, it was a duel between Fiorentina’s 4-3-3 and Atalanta’s 3-4-1-2. In the beginning, we saw Atalanta numerically match Fiorentina centrally (A), luring the latter into building play via wide areas.

Upon doing so, Atalanta implemented a staggered 4-3-1-2 in press, in efforts to counteract Fiorentina’s width (B) and win the ball in favorable positions. Here, short-pass build ups were made difficult both centrally and wide (C), forcing a change in philosophy to a more long-ball approach for the home team.

Instead of building play via short passes, we often saw Fiorentina striker Krzysztof Piatek, drop deep to receive long balls. This allowed Fiorentina to create a numerical advantage in midfield (4v3), with surrounding attackers playing off Piatek as a target man (D). This pattern unfolded quite often in the first half. However, Atalanta’s intensity and discipline prevented such threat from developing further.

In the second half, Atalanta enforced a man-marking strategy to neuter Fiorentina’s long ball threat. Here, each Atalanta player man-marked each Fiorentina player using a 3-5-2 as such (E).

In addition to matching Fiorentina’s midfield, this strategy completely diminished their attacking threat (both long and short). In the 2nd half, a moment of lapsed concentration saw Fiorentina take a 1-0 lead against the run of play. This forced Atalanta to up the ante, asserting more dominance in possession as opposed to solely waiting for turnovers of play.

Here, Atalanta’s DMs dropped between their CBs alternately, creating a makeshift back 4 which allowed for ball progression via wide overloads (H). In response, Fiorentina defended using a 4-1-4-1 (I), where they were able to gain numerical superiotrity over Atalanta’s overload, making attacking progression difficult (J).

This forced Atalanta to “throw the kitchen sink” at Fiorentina, by: 1) having their both strikers join the wide overload (to facilitate ball progression via numerical match-ups) and 2) having their CMs and wingback roam forward into the box to receive crosses (K).

This created a situation where there were 6-7 Atalanta players in attack, unfortunately for them however, their lack of attacking speed saw this effort go to no avail. All of this brought about a 1-0 victory for the home team in what was a defensively valiant effort from both sides.

In what many would call a cagey affair, the game was a defensive clinic put on by two top Italian sides. More could have been done to find solutions to each other’s defensive strategies, however, each team’s adamancy in attack was understandable given the position of both teams are on the table.