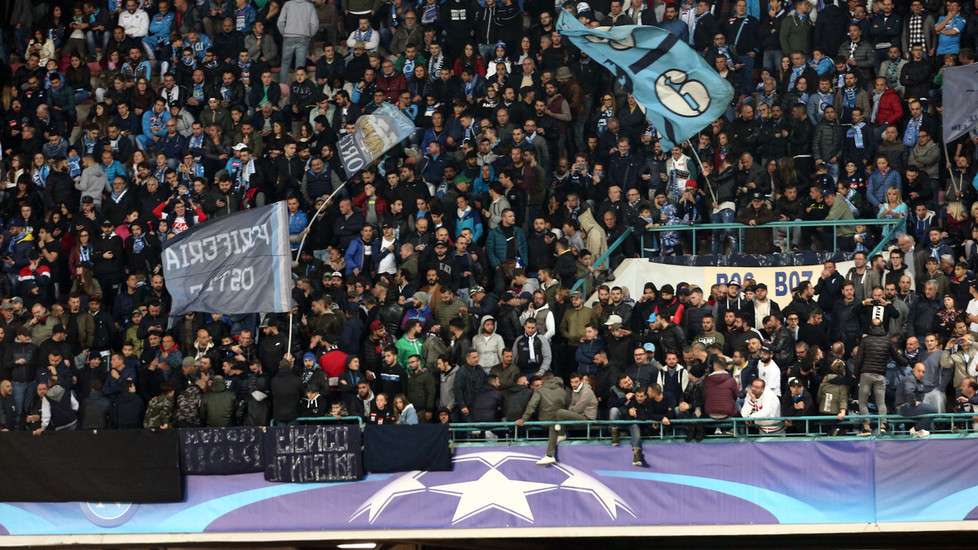 My request for a press accreditation to Napoli v. Manchester City was rejected, which led to one of the best footballing experiences I could imagine.

While the only way to buy a ticket securely online was with an SSCN Fan Stadium Card, I was left scrambled as I only arrived in Naples the day of the match. I arrived from Lisbon, having attended Sporting v. Juventus the night before.

In hopes of buying a ticket, I went directly to the ticket shop in Galleria Umberto but was told I’d only be able to get a ticket at the stadium on match day. So after a quick pizza and cafè at Bar Nilo (famous for its Maradona shrine), I headed to the Stadio San Paolo in hopes of getting into the stadium. It took almost an hour to arrive via the metro system.

As I made my way to the official Napoli store outside the stadium, I was asked by at least four men if I needed a ticket. I was told at the shop that there were no tickets for sale but as I walked out a scalper offered me a ticket for €25. Figured it might be a bit risky but I came this far might as well give it a go. I handed him €30 and he goes to get change from a worker inside the shop. A quintessential Neapolitan scene.

So, I make my way around to my entrance while conjuring up excuses for the fact that my ticket has the name of a woman born in 1979. As I present my ticket and ID, the man mumbles something in Neapolitan dialect that I couldn’t make out. For a second I wasn’t sure if I was going to watch the match or head back to my hotel. Thankfully, I made it through and made it inside the San Paolo.

I made my way to the section where my ticket read and suddenly I realized I was in the midst of the Curva B amongst the ultras. A bit stunned, I made myself a small spot to stand and tried my best to fit in. The chants started even before the opening whistle and only ever stopped during halftime. Even when Lorenzo Insigne scored the opener, the Curva B just kept singing that I could barely even hear Decibel Bellini announce the goal. Three different guys must’ve hugged me though, which is the beauty of football bringing people together.

Even when Man City scored each of their four goals there was maybe just a seconds pause of despair but then right back to chanting. You could barely tell that Napoli had lost the match with the way the fans sang and enjoyed themselves for 90 minutes. It’s a beautiful thing to see supporters give everything for their team and still appreciate them when falling short.

Despite the unfortunate loss, being in the Curva B at the Stadio San Paolo for a Champions League match was an absolutely incredible experience. The love Neapolitans have for their club is truly something special and I was honored to be a part of that for a night.

Napoli’s Victor Osimhen transfer to be investigated in...