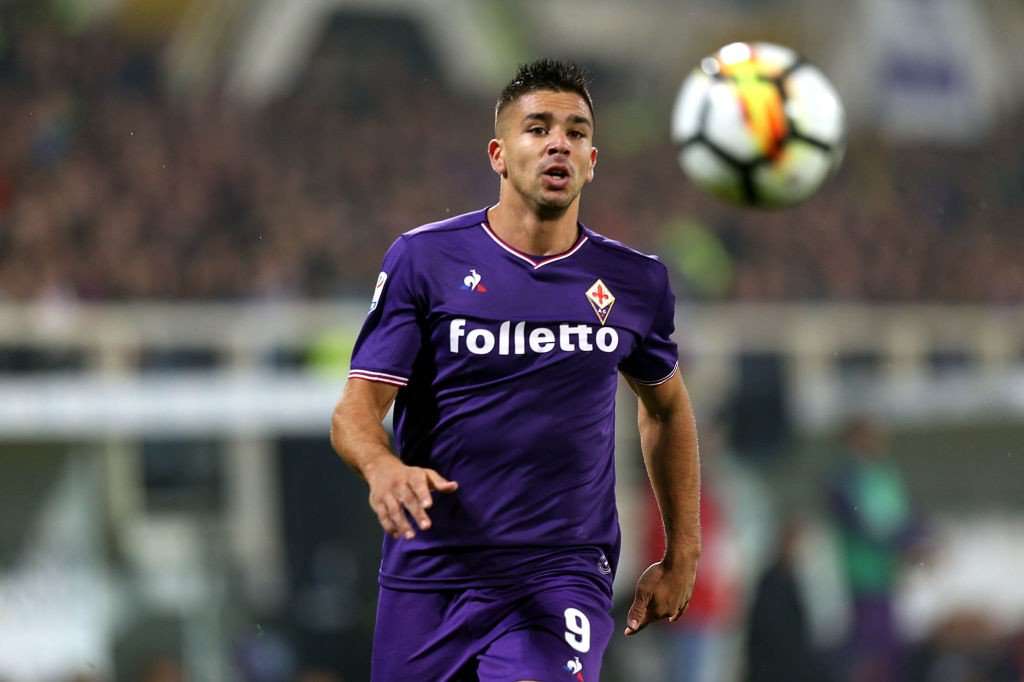 Father-son relationships are hard to come by in football. A few notable football families include Cesare and Paolo Maldini; Mazinho and his two sons Thiago and Rafinha; Ian Wright and his two sons Bradley and Shaun. The list of successful families in the footballing world isn’t lengthy, however, with the recent emergence of a certain young Argentinian striker, we may have to throw the Simeone family into the fray.

Everyone knows Diego Simeone. ‘El Cholo,’ coach of the Spanish side Atlético Madrid, famous for penetrating the impenetrable hierarchy of Real Madrid and FC Barcelona in La Liga. Not so famous for getting David Beckham sent off in the 1998 World Cup. The Argentinian coach is entering his 7th season as Atlético’s boss on the touchline, and his achievements in Spain are nothing short of miraculous. His style of play and tactical setup have been cemented in the footballing world, and Simeone has earned himself one of the highest reputations in terms of managers.

Simeone’s achievements with Atlético are reminiscent of Christ turning water into wine. Nevertheless, his degree of success may soon be eclipsed by an emerging striker at Fiorentina – who just so happens to also be his son.

Giovanni Simeone has only just begun his way up the hierarchal structure of European football. A by-product of Diego Simeone and his first wife, Carolina Baldini, Giovanni was born amid his father’s stint with Atlético – as a player – in 1995. His early years witnessed him growing up in Argentina, Spain and Italy, consistent with the transfers of his father. In 2005, then 10-year-old Giovanni relocated back to his father’s homeland, and as the cliché goes, “the rest is history.”

Giovanni learned the rudiments of the game at the River Plate academy, developing as a young player at the club his father managed. His swift success in the youth ranks earned him his first professional contract in November 2011, but he only began to feature for the senior squad in the latter stages of 2013. The burden of a surname as renowned as Simeone’s could have proven to be unbearable, but Giovanni simply surpassed the obstacles with ease.

El Cholo’s son spent time on loan with Club Atlético Banfield from mid-2015 to mid-2016, a move primarily inspired by River’s attempt to continue Giovanni’s development. This period out on loan is where his copious amounts of talent underwent their evolution, aided by first-team opportunities and match experience. In 34 appearances for the Argentinian side, Simeone netted 12 goals, averaging a goal every 2.5 matches.

After returning to River at the conclusion of his loan spell, Simeone was warned that he would have to compete with five other players for a starting job. Viewing this as a catalyst to a stagnated career, Giovanni looked elsewhere to continue his footballing dream, mainly abroad. Luckily, his performances for Banfield had spurred overseas interest and a plethora of clubs sparred for his services. Italian club Genoa emerged as victors, splashing a reported €5 million to gain the services of the young Argentinian. Giovanni’s dream was to play in Europe, and here was his opportunity to fulfil it.

The famous phrase “good things come to those who wait” extols the virtue of patience. This very phrase is applicable to Giovanni’s first season in Italy, one in which opportunities came sparingly over time. His first start didn’t come until a matchday six meetup with Pescara, and only arose due to Leonardo Pavoletti’s injury problems. Nevertheless, as almost all great players do, when an opportunity presents itself, they capitalize on it with swift execution. Giovanni rewarded manager Ivan Jurić’s faith in him by repaying him with a debut goal during his first start, earning Il Grifone a hard-fought point. From there on out, Giovanni’s opportunities presented themselves more regularly, and his successful campaign earned him a transfer to Italian giants Fiorentina.

In a year where Genoa finished a lowly 16th, Giovanni was one of the scarce bright spots. Looking closely at Simeone’s 2016-17 campaign with Genoa, the Argentinian striker scored 13 goals and notched 2 assists in 36 appearances. Capitalizing on the string of injuries that plagued first-team striker Leonardo Pavoletti, Giovanni exhibited profuse amounts of talent for a Serie A virgin. Taking very little time to adapt to the distinctive style of Italian football, Simeone energized a lackluster Genoa side. As mentioned before, his performances warranted a reported €15 million move to Fiorentina.

The performance that thrust Simeone into the limelight last season came in a matchday 14 meetup against league leaders Juventus at the Stadio Luigi Ferraris. After just three minutes, the young Argentinian punctured the normally resolute Juventus defense, bouncing on a rebound and slotting it home past the outstretched Buffon. Only 10 minutes later, a lofted ball was swung into the box, and Simeone converted a diving header, doubling Genoa’s lead over the winners of the last six Scudetti. The energetic Argentinian propelled Genoa to a 3-1 victory, cementing himself in Europe’s hotbed of talent.

Unlike his father – who mainly operated as a roaming midfielder – Giovanni is a born striker. Without probing into the intricacies of his game, the younger Simeone is a natural finisher equipped with a true striker’s instinct. Although his concentration and passing could benefit from some sharpening, Giovanni Simeone is certainly one to watch and at just 22 years old, Argentina and Fiorentina fans alike should rejoice over the prospect they have at their fingertips.

This past weekend, club manager Giancarlo Antognoni briefly spoke to Premium Sport before the match against Udinese and had some comments on the striker, “Simeone is fast and quick like Paolo Rossi. He wants to prove himself and improve like Batistuta did.”

In antithetical fashion, I will briefly describe the shortcomings of Simeone’s game, before indulging in the wonderful intricacies of the young Argentinian’s playing style. For a 22-year-old, Simeone’s game lacks many significant weaknesses; his hindrances can certainly be improved upon via experience and mere maturation. Primarily, Simeone is a hit-or-miss player: of his 14 Serie A goals, only 57 percent of them came as solo goals. His three braces can distract from a few performances where he went missing for Genoa, drawing blanks in front of goal. Consistency can be one of the most vital traits a striker can possess, and Simeone would certainly benefit from a hot streak of goals in a succession of games.

Another one of Giovanni’s weaknesses that is almost unanimously accepted is his passing. Last season, Simeone completed a woeful 66 percent of his passes (in comparison to other Serie A strikers, Belotti, Icardi, Džeko, and Kalinić all completed over 70 percent of their passes). Simeone himself has expressed his desire to emulate the success of his Argentinian compatriot, but his passing will need to improve if he hopes to take another step up. A few minor flaws to his game also include questionable decision making, poor touches and high dispossession.

Simeone not only exhibits various traits crucial for being a successful striker, but also a myriad of strengths that augment his playing style. First off, Giovanni is a clinical finisher with a striker’s instinct, and tends to be “in the right place at the right time.” Only 11 of his 76 shots last season came outside the box and all 12 of his goals were from inside the penalty area. Giovanni is a true poacher, a part of his game aided by his football IQ and instinct. If you needed someone to put away a threaded through ball inside the 18-yard box, Simeone should be your guy.

Although the Argentinian stands at only 5’11”, one of his greatest strengths is his heading ability. 33 percent of his goals last season came off his head, and he poses a danger to defenses from set pieces or crosses from open play. His heading accuracy illustrates a mastery of overall technique and his aerial ability adds another facet to his game.

Simeone’s ability to run through the channels demonstrates his high footballing intelligence. His attacking movement is fantastic, whether it be an off-the-back shoulder run to put himself 1v1 with the keeper, or a darting overlap to free up space for his teammates. He can play off the shoulder of defenders, always leaving a nagging sense in the back of their head’s. This is without mentioning Simeone’s fantastic work ethic, which enables him to pressure the opposition during the 1st stages of their build-up, forcing a deep block to loosen up or defenders to settle for long balls. His ability to play at a high tempo for the majority of the 90 minutes gives Serie A defenders nightmares when they sleep.

Giovanni’s decision to go overseas in 2016 and play in a top 5 European league will undoubtedly prove to be a priceless decision in the future. Already, the decision has begun to pay dividends, as demonstrated by his transfer to Fiorentina. The hunger he possesses is key for a young player and will serve him wonders as he strives to improve every single facet of his game. Diego Simeone’s legacy may soon be outdone by his own son, a defeat he may just have to relish. An Argentina senior team call-up may seem like light years away for Giovanni, especially considering the attacking arsenal at Sampaoli’s disposal. Nevertheless, this allows the younger Simeone to focus on club football, but more importantly, himself. His passion and dedication for the game should only aid in his development on the pitch, and in 1-2 years, he could easily be Serie A’s next Icardi. Should his career continue its upward trend, Giovanni Simeone could be the next world-beater, and one of Argentina’s future superstars. With Diego Simeone recently announcing he would love to bring his son under his wing at Atlético, the road ahead for his son may eventually reveal many twists and turns but one thing is for sure: remember the name, Giovanni Simeone.