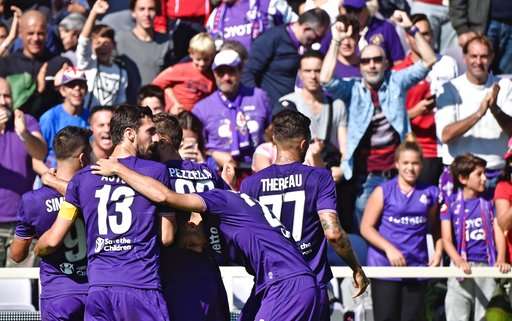 Fiorentina welcomed Udinese to the Artemio Franchi as league play resumed after the international break. La Viola had a disappointing start to the season, picking up only seven points from the first seven matches. In Florence, you could sense the fanbase started to get a bit agitated and expecting more from this squad. The three points won this afternoon will hopefully ease over most fans for a little while.

Stefano Pioli’s side was in control for most of the match but left it close until the final seconds. Cyril Thereau broke the deadlock in the 27th minute with a true poacher’s goal as he found the net from the six-yard box.

The Frenchman bagged his second against his former side in the 57th minute as he pounced on a rebound following a long-distance shot from Jordan Veretout. It seemed as if La Viola would ease to a nice, solid victory but it was anything but. The visitors had the ball in the back of the net in the 63rd minute but VAR did its job and correctly ruled the play offside.

Less than ten minutes later though, Udinese would find the net and get on the board. Samir found himself unmarked inside the box after following a free kick outside the box. There was no more room for comfort as fans minds flashed back to just three weeks ago to the match against Atalanta when a 94th-minute goal denied Fiorentina victory. It was shaky at times but La Viola were able to hang on for the final 20 minutes and secure all three points against Udinese.

While the victory was undeniably an important result, it is still evident that the considerable squad turnover this past summer is having a reeling effect. Losing both Matias Vecino and Borja Valero in the midfield to Inter has left a great deal to be desired in the middle of the park for Fiorentina. Creativity and the ability to thread passes is lacking, making it harder for clear-cut chances to arise. Riccardo Saponara could potentially fill this need quite well but he’s been dealing with an injured left foot lately and has only made one appearance this season, which was off the bench.

Summer signing striker Giovanni Simeone has only scored two goals thus far but if he can get better service, he will be able to bag some goals. Teenage sensation Federico Chiesa has been one of the few bright spots the past 16 months for La Viola. He’s continuing to grow and perform at a high level. The ever-underrated Cyril Thereau has scored at least ten goals in four out of the last five Serie A seasons. Fiorentina should be able to count on him to produce.

Nonetheless, it seems like it might be a struggle for Fiorentina to replicate their eighth-place finish from last year. Between the squad turnover and appointing a new coach, it may take too much time for La Viola to find their rhythm. It still feels that this Fiorentina side leaves something to be desired and that there is a slightly strange aura around the club at the moment. In June, the club released a statement announcing, “The ownership is willing to receive concrete offers…given the dissatisfaction of the fans, to step aside and make the club available to those who want to buy it, so they can manage it in the way they feel is right.”

The Della Valle family has owned the club since 2002 but there hasn’t been a single word since that statement in June. Much like the future of the club, how Fiorentina’s season will play out, remains up in the air.

Barcelona set to fail in attempt for Fiorentina’s...