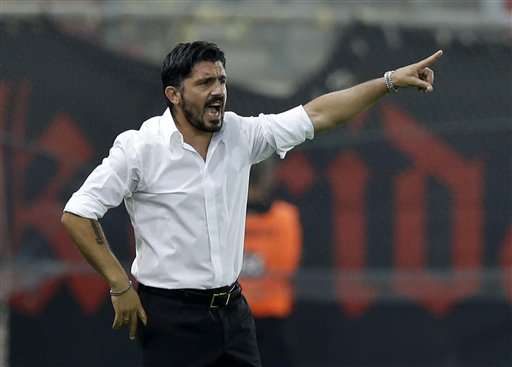 Gennaro Gattuso was officially introduced as the new head coach of A.C. Milan today. The Calabrian has been promoted from his coaching role with the Primavera squad.

“Rino has important characteristics, not just in transmitting the Milan DNA, but in concepts which I like very much,” said sporting director Massimo Mirabelli. “He can give us something important.”

“It’s an important day and I feel a great responsibility. I am convinced I have a great young squad in my hands,” Gattuso said at his introductory press conference. “Montella? With him, I have a great relationship, though some of our philosophies are different.”

“We have to think of the match against Benevento like a World Cup Final. We just need passion, to love to work, there’s a lot of adrenaline and for me the dream continues, it’s a pleasure to manage here. This team can give more, we need to become a team, enter the field as a team and know how to suffer. I want them to see that there’s a huge difference between winning and losing: when you lose you have to be burning up inside, at Milanello it’s like a funeral.”

“I feel the same emotions as I did when I was a player, when I come to Milanello it’s like I’m in heaven.”

Gattuso earned his coaching license in 2011, while he was still playing for Milan. He has previously coached Palermo, OFI Crete, and Pisa.

Gattuso Sets Out to Prove He’s More Than Just ‘Grinta’