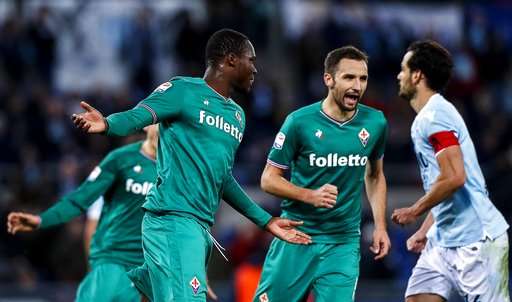 Fiorentina traveled to Rome on Saturday for their clash with Lazio with some questionable results recently behind them. They came away with a spirited performance against a very good Lazio side. The 1-1 draw means Simone Inzaghi’s Lazio failed to bounce back from their derby loss last week with a win, but they came tantalizingly close, leading up until the 94th minute when Khouma Babacar converted a controversial penalty.

Stefano Pioli’s return to Lazio saw him send out the following eleven in a 4-3-2-1:

Fiorentina started the game excellently, pressing Lazio high and forcing some turnovers early on. Pioli had evidently watched Roma’s successful pressing against Lazio last week since he also angled his press towards Lazio’s right centre-back Bastos. The central positioning of Federico Chiesa and Cyril Thereau meant Fiorentina had five centrally positioned midfield players, which gave them a numerical advantage in midfield even against Lazio’s quartet of Lucas Leiva, Marco Parolo, Sergej Milinkovic-Savic and Luis Alberto. Leiva’s influence was initially limited as Fiorentina started the match strong. Not surprisingly, this Lazio under Inzaghi found a way around Pioli’s tactical surprise. Milinkovic-Savic and Parolo started moving wider which saw them finding some space, notably Milinkovic-Savic down the left because the wing-backs Adam Marusic and Senad Lulic pushed Fiorentina’s full-backs Laurini and Biraghi deeper. When Marco Benassi tried following Milinkovic-Savic wide, Luis Alberto could pop into the central space behind the Italian midfielder. One of these wider attacks led to Fiorentina conceding a free-kick which Alberto delivered into the box and Stefan De Vrij headed home to give Lazio the lead.

Fiorentina were ever threatening on the break though, especially through the impressive Chiesa, which made the game open and entertaining. Lazio themselves also did their best work in attacking transition which made it seem a second goal was coming. It should have too, but Fiorentina created some good chances and stayed in the game. In the end, it proved vital that they’d keep out a second goal for the home side.

In stoppage time, Felipe Caicedo’s foot caught German Pezzella who went down in the box. After some consultation with VAR the referee Davide Massa pointed to the spot. The substitute Khouma Babacar struck the penalty well, earning La Viola a deserved point in a really tough away game.

Fiorentina have been very inconsistent, but it’s basically a new squad, with a new coach and they’ve put in some very good performances thus far. Their pressing and overall defensive play was really good on Sunday, and really encouraging going forward. Lazio have now gone two league games without a win after their stunning start, but they were unlucky on Sunday and should probably have added to their lead to clinch the win. They’ve still made a great start and aren’t far behind the top teams. If they can continue to challenge for fourth throughout the season they’ve done really well.

Mauro Icardi continues to be the main man for Inter. Away at Cagliari, the captain scored twice to give Inter another win. The Sardinians impressed in the first half with the likes of Nicolo Barella and Luca Cigarini doing well in midfield. Against the run of play, Antonio Candreva’s cross reached Ivan Perisic at the far post who directed into the path of Icardi who tucked in the opening goal. Marcelo Brozovic added to the lead in the second half when Candreva cut the ball back for the Croatian as Inter started to control the game. The goal of the night gave Cagliari hope when a stunning cross from Paolo Farago reached Leonardo Pavoletti who finished beautifully on the volley. Icardi then scored his second to clinch the win when capitalizing on a rebound. Spalletti’s men keep up their consistency and Inter temporarily went top of the table before Napoli regained the spot on Sunday.

That was when Jorginho scored the follow up from his missed penalty to give Napoli another win, this time away at Udinese. Massimo Oddo made his first appearance as Udine coach and lined up his side in a 3-5-1-1 with Croatian Andrija Balic as his regista. Udinese did well for large parts but Napoli proved too strong. Sarri’s men remain top ahead of Friday’s monumental clash with Juventus.

Sampdoria failed to build on their win against Juve as they fell at Bologna. 3-0 it ended after another Simone Verdi show with a goal and an assist. Samp have been very consistent apart from this match and their crushing 4-0 loss away at Udinese. It’s remarkable given the way they normally perform. Big, big win for Roberto Donadoni’s Bologna who continue to play some good stuff and are getting some decent results in the middle of the table.

Davide Ballardini’s tenure at Genoa has started brilliantly after the win at Crotone last week was followed by a 1-1 draw at home against the in-form Roma. Stephan El-Shaarawy gave Roma the lead in the second half, but Daniele De Rossi conceded a penalty, got sent off and saw Gianluca Lapadula score from the spot to earn a draw for the Grifone. Poor loss of two points for the Giallorossi while Inter, Napoli and Juventus all got maximum points.

Milan-Torino finished as a scoreless draw and both sets of fans will want to forget quickly. Mihajlovic’s Toro varies in their performances, to say the least. A draw at San Siro, the second of their season as they also drew with Inter there, is still a decent result though. Montella’s Milan had been quite poor and inconsistent and the coach paid for it when he was relieved of his duties as first team coach on Monday and replaced by Gennaro Gattuso.

Hellas Verona are probably happiest this weekend as they finally won, triumphing 2-0 at Sassuolo with goals from Bruno Zuculini and Daniele Verde. Zuculini scored after an Alessio Cerci run which rolled back the years and Verde scored after bringing down a long ball effortlessly with a beautiful touch before finishing. Important win for the Gialloblu who maintain touching distance with SPAL above the relegation zone. Christian Bucchi paid for the loss as he was sacked as Sassuolo coach and replaced by Beppe Iachini on Monday.

SPAL themselves took the lead at Chievo but failed to build on the lead as two goals from Roberto Inglese turned the game around after Bostjan Cesar’s own goal had given SPAL the lead. The Flying Donkeys continue to be consistent as always and are solidly making themselves comfortably in the top half of the table.

Juventus dispatched Crotone on Sunday night by beating the Pitagorici 3-0 in Turin. Mario Mandzukic, Mattia Di Sciglio, and Mehdi Benatia got the goals as the Bianconeri warmed up ahead of their clash with Napoli at San Paolo on Friday. What a match that will be.

Benevento remains without a point after losing in Bergamo against Atalanta. That makes it 14 straight losses and given the fact Hellas, Genoa and SPAL have all been getting points recently, the train has started to leave the station. Roberto De Zerbi needs his side to earn some points, immediately. Atalanta got a welcome win thanks to Bryan Cristante’s winner and the midfielder capped a great week after scoring twice in England as Atalanta dismantled Everton 5-1 in the Europa League.

The striker continues to score. Two more this weekend as he made it 15 goals from his 14 appearances so far. Joint-first in the goal scoring charts. His Inter shadows Napoli at the top. It’s mostly thanks to his goal scoring.

Donadoni earned his second win in a row when his Bologna dismantled the impressive Sampdoria of Marco Giampaolo and won 3-0 at Renato Dall’Ara. Bologna are in eighth, level on points with A.C. Milan. Great coaching from the former midfielder is one of the reasons for that.

The overall quality of Leonardo Pavoletti’s volley against Inter was sublime. The quality of Farago’s cross was fantastic while the timing and execution from Pavoletti was simply majestic.