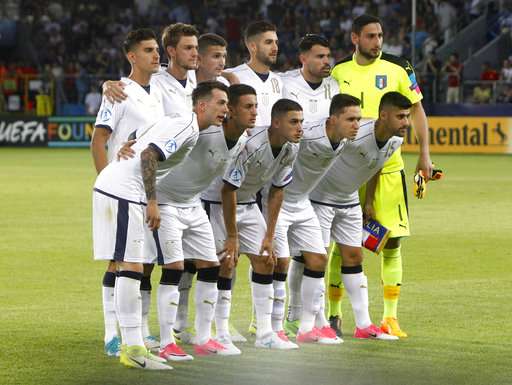 You all know it by now. For the first time since 1958, the World Cup will be played without its second-most successful nation. Italy managed to get knocked out by a very limited Swedish side because of a failure to respond to a deflected goal in the first leg in Stockholm. Given the chances Italy created in the second leg, it’s remarkable that they failed to equalize the aggregate score, but no one can be blamed for the debacle on Monday other than the players and their coach Gian Piero Ventura. Behind the scenes though, there are also issues with the president of the FIGC, Carlo Tavecchio, in particular. Given the explosive situation at the moment, Tavecchio should really stand down from his position for the good of the nation.

The same goes for the coach Ventura who failed to guide his side to the World Cup in Russia. The failure in itself isn’t the biggest issue, but the lack of an identity in this team and the failure to get the best out of a group of players much better than what is now being described are the main problems with his tenure.

With Ventura’s dismissal, the FIGC need to recruit a new commissario tecnico and that might prove problematic if they want to get their man. Carlo Ancelotti has been suggested and while his personality and calm would definitely cool the situation down, Italy need a coach who will bring through a new generation of extremely talented players and Ancelotti is known to trust the experienced players over younger. Gian Piero Gasperini’s stunning work at Atalanta and his willingness to promote young players as well as his reputation as a meticulous coach would make him an intriguing option in my opinion. Personally, though, the number one priority should be to entice Massimiliano Allegri to the position, bring in a caretaker for the March friendlies and then let Allegri take the position at the completion of Juventus’ season. It’s not certain Allegri would be interested in the position as he would likely have the opportunity to get lucrative deals in England next summer (Chelsea/Arsenal) but he would be a fantastic appointment. Luciano Spalletti would be another fantastic appointment but he’s just started his work at Inter and I don’t think a return for Antonio Conte would be the way to go. As always in Italy, there are fantastic coaches but it might prove difficult to lure them to the position.

Regardless of who the coach might be, the next man in charge has to embrace a new generation of players. Gianluigi Buffon, Andrea Barzagli, and Daniele De Rossi have already said they’ll retire and Giorgio Chiellini will likely join them. Marco Parolo is 32 and Antonio Candreva is 30 and shouldn’t be built around ahead of Euro 2020. Leonardo Bonucci, however, is still a sublime defender and is also 30. He must be convinced to remain as his leadership is vital for the next generation of players. Bonucci can be the lynchpin the new Italy is built around as the players banging on the door suits the type of football Bonucci thrives in.

With Buffon retiring, Gianluigi Donnarumma will take over in goal. The 18-year-old is young, sure, but also remarkable. Behind him are good understudies in Mattia Perin, Marco Sportiello, and Alex Meret. The goalkeeper position seems well-filled going forward.

In central defence, the departures of Barzagli and Chiellini will be felt hard initially. If Bonucci stays on, there are exciting options to compete with him and against each other for a place alongside Bonucci. These options include Juventus pair Daniele Rugani and Mattia Caldara (both impressing at the moment), Bonucci’s Milan teammate Alessio Romagnoli and Sampdoria’s left-footed Gianmarco Ferrari. These four have already been in squads and made their debuts for Gli Azzurri and are all capable of improving further with more experience from international football. The qualities of these players also opens up the possibility of using two or three center-back partnerships for the next coach, improving the options of the new man in charge.

At full-back are also interesting players to welcome into the national team setup. Matteo Darmian is 27 and Davide Zappacosta 25 so they can easily be kept around the squad, but players like Leonardo Spinazzola and Mattia Di Sciglio of Juventus, Andrea Conti of Milan and Antonio Barreca of Torino are excellent full-backs in their own right, capable of attacking and defending either as full-backs or wing-backs. Barreca might be one more for the future, but his potential is high. Conti and Spinazzola were brilliant in the Atalanta quad of 2016/17 and look set to take both flanks of the Italian defence in the future. Additionally there is Alessandro Florenzi, still only 26, who can be used in midfield but is excellent at right-back. Italy’s defence shouldn’t be a worry.

The central midfield options look exciting as well despite the likely departure of Parolo as well as the retirement of De Rossi. Marco Verratti has struggled for Italy but hopefully, the right coach can unlock his potential also in the Azzurri. Jorginho showed against Sweden why he needs to have a vital role in the new regime. Roberto Gagliardini has already been around the setup for some months, Lorenzo Pellegrini looks great at Roma and Stefano Sturaro impressed under Conte’s tenure. Daniele Baselli made his debut in the summer and is a very modern midfielder worthy of a place in the national team with his aggressive defending and elegance in possession. Marco Benassi has impressed following his move to Fiorentina and is another option. Add the emerging talent of Alessandro Murgia at Lazio, Rolando Mandragora of Juventus and Cagliari’s superb Nicoló Barella and you understand the quality of some young outsiders.

There also several attacking midfielders and wingers to get excited about. Lorenzo Insigne is one of Europe’s best attackers, has scored against Real Madrid and Manchester City in the last eight months for example, and should be the man the attack is built around. Inexplicably, Ventura failed to incorporate the prodigious Napoli attacker in his team. Stephan El Shaarawy is in great form at Roma and looks like he’s about to fulfill his potential, Federico Bernardeschi is a great talent who’ll grow at Juventus and Fiorentina’s Federico Chiesa continues to impress in Florence. Add Domenico Berardi and Simone Verdi to the equation and you have additional options for the creative positions behind the attackers.

Oh yes, the attack. Andrea Belotti and Ciro Immobile failed to strike up a flourishing partnership in qualification and I can’t help but think they both prefer to be a lone striker? Regardless, they’re both brilliant and with the right service will bomb in goals. Immobile looked significantly better in the second leg when someone (Jorginho) actually noticed his superb runs in behind. I was at the stadium in Stockholm and he made countless great runs but was never spotted by teammates. Manolo Gabbiadini has a different skillset to those two but is very good as a link-player and could be useful going forward. If Simone Zaza continues is ridiculous form in Spain then he’s an option to start next fall. Mario Balotelli has six goals in eight Ligue 1 games this season and has certainly merited a recall.

I’ve mentioned 36 players (I know I’m bound to have missed a few) I think are really exciting and interesting to follow in the next few years. With the right coach, Italy can be a force at Euro 2020. I think a different style needs to employed, with a greater emphasis on technical, possession football given the players at disposal. Let’s take a look at the 36 again:

Personally, that’s an excellent national team squad. With the right coach, in the right tactical setup (4-3-3 or 3-4-3 in my mind) and with the enthusiasm of a new generation I think that group, challenged by some of the 13 I’ve omitted from my initial squad and a few others could create a new exciting era for the Italian national team. Despite the disaster of Monday’s result, I for one am excited.