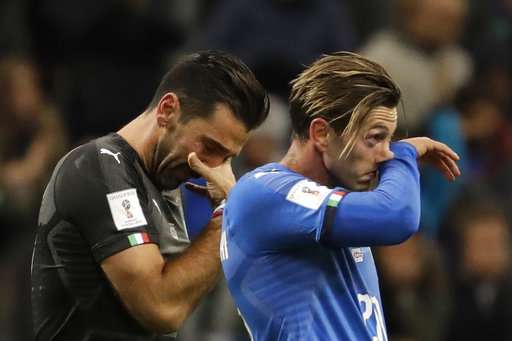 Having produced some of the best players and best teams in history, Italy is one of the pillars of the footballing world. Their impressive trophy haul of four World Cups and one European Championship speaks for itself. They are one of the top dogs in football and always have been. However, this great footballing nation revealed to us all their flaws of the past decade, as they fell to Sweden 1-0 on aggregate after a shockingly poor qualifying campaign, failing to earn a spot at the FIFA World Cup for the first time since 1958. The hard truth is, the signs of future failure have been lurking for a decade now within the Italian National Team, including their failure to integrate younger players into the team, and their refusal to rebuild the system that brought them despair at recent World Cups. All these little things they did wrong over the years led up to this unforgivable failure that will linger like a disease over Italian football for the next half-decade.

If you were a football fan a decade ago, you’ll likely remember the 2006 FIFA World Cup Final. That final was stacked with legends for both France and Italy. Zidane, Henry, Pirlo, Cannavaro, Buffon, names that will live on forever in the realms of the beautiful game, playing in the biggest game in all of sports. Italy triumphed that day, the 9th of July 2006, a day that a new generation of children fell in love with the sport, and possibly fell in love with the Italian National Football Team too.

Fast-forward four years from the 2006 triumph to the 2010 World Cup in South Africa. A tournament that all Italians would love to wipe from their memories completely. Italy was drawn into a relatively easy group alongside Paraguay, New Zealand, and Slovakia. It truly was a very straightforward group, and any football fan with even an ounce of knowledge would have expected Italy to cruise through their 3 opponents.

What happened next, left the world speechless. The defending champions failed to win a single game and finished dead last in that so-called “easy” group. It was a tournament that sent shockwaves around the footballing world. How could this happen? How could the defending champions be so lackluster and disappointing? This failure was eventually blamed on the manager instead of the players or the system, and Marcelo Lippi was pressured into resigning as a result. The manager changed, but the same World Cup problems continued to plague the Azzurri.

The 2014 World Cup in Brazil wasn’t much different. Italy once again looked poor and failed to get out of the group stage due to their painfully obvious lack of quality and cutting edge. Again, the manager was blamed, and Cesare Prandelli resigned.

So after their 2006 triumph on the world stage, Italy couldn’t pull themselves out of the group stage at consecutive World Cups, and the blame was put upon everything and everyone except for the players.

Now, in November 2017, after a failure even greater than the ones in 2010 and 2014, it’s time for us to finally blame the players. Gianluigi Buffon, at a whopping 39 years old, still insisted on taking up a spot in his national team, even after two consecutive World Cup failures. Andrea Barzagli is 36 years old and did the same thing. These are legends of Italian football, no question. Hell, Gianluigi Buffon might just be the greatest goalkeeper of all-time, but there’s a time to move on from International Football and the time for some of these players was long ago. Individual pride and love for your country should never stand in the way of your country’s progression. These veteran players refused to step down, resulting in the delayed the process of integrating the younger players into the team.

Yes, Gian Piero Ventura’s appointment as manager can be correctly labeled a disaster. He made countless mistakes in his team selections and formations, which ultimately led to this calamity. His continuing use of the back three left a lot of football experts scratching their heads, but the players and the system need to be partially blamed for once, instead of just the manager.

Usually, after a team fails miserably in its expectations, they undergo a complete overhaul from top to bottom. Different players are selected, the youth system is revamped, and the technical and tactical ideas are changed. This never happened for Italy, not after 2010, not after 2014. The aging Italy team from years ago continued to age because the stubborn Italian football hierarchy refused to rebuild, and the stubborn footballers didn’t let them.

Going into the 2018 World Cup, Italy were somehow still building their team around the players that they built around eight years ago when they should have started slotting the youthful faces into the squad long ago. Daniele Rugani and Alessio Romagnoli are two of the best young centre-backs on the planet and are well into their 20’s, and somehow at their age, have less than 10 international caps between them. This is a result of the 36-year-old centre-back Andrea Barzagli refusing to hang up his boots for the National Team and continuing to hog a spot in the lineup when he should never have been allowed to.

In the first leg of the crucial World Cup Qualifying playoff against Sweden (which ultimately ended in defeat), seven of Italy’s 11 starters were over the age of 30, with five of them over the age of 32.

Clearly, they aren’t being utilized properly due to an outdated tactical system. Lorenzo Insigne, arguably Italy’s best-attacking player, was benched for both playoff matches against the Swedes, and somehow wasn’t even brought on as the clock ticked down in the second leg when Italy needed a goal desperately. Jorginho, a midfielder who is starting to get credit as one of the best deep-lying playmakers in the world, didn’t start until the second game when it was too late. Matteo Darmian, who isn’t even a starter for his club team Manchester United, is somehow starting for Italy. These are all long-term results of Italy refusing to change its system through this decade.

Italy failed to score a single goal against Sweden, the 25th ranked team in the world, in 180 minutes of football, and this was due to their agonizing lack of quality in the final third of the pitch. Looking at Italy’s team, it doesn’t have the depth required to be a World Cup contender, and the defensive system that Italy always insist on playing doesn’t really fit the players that they have in this squad. Of course, the defensive mentality delivered them four World Cups, but now this system has backfired massively, as they don’t have enough quality in the middle or the top of the pitch anymore to capitalize on their defensive superiority.

This highlights the need for a revamp of the youth structure in Italy. Germany, Brazil, Spain, France, and even England are consistently producing many fine young players and are integrating them into their national teams, something Italy hasn’t been doing. Five of Italy’s best U-23 talents, Gianluigi Donnarumma, Federico Chiesa, Daniele Rugani, Alessio Romagnoli and Lorenzo Pellegrini have just 14 senior caps between them. In comparison, Dele Alli, Marcus Rashford, Marco Asensio, Saul, Kylian Mbappe, Ousmane Dembele, and plenty of Europe’s other great young talents have already been integrated into their countries’ senior teams and are playing key roles. Now, after the ultimate failure that will never be forgiven by the fans, Italy are finally being forced to move on from Buffon, Barzagli, Chiellini, De Rossi, and their aging core, and onto a criminally inexperienced group of young players.

Italy will suffer for the next few years as they rebuild their team, but this is a painful phase that every national team has to go through at some point. Italy’s decision to delay the rebuild for this long and neglect their younger players has cost them a spot at the 2018 World Cup and made the rebuilding process an even greater mountain to climb than it should be. Since they won’t have anything else to do next summer, it’s time for Italian football to tweak their technical and tactical aspects, as well as revamp their youth systems completely, in order to get back to where they belong.

This post was originally published on the Free Flow Blog.