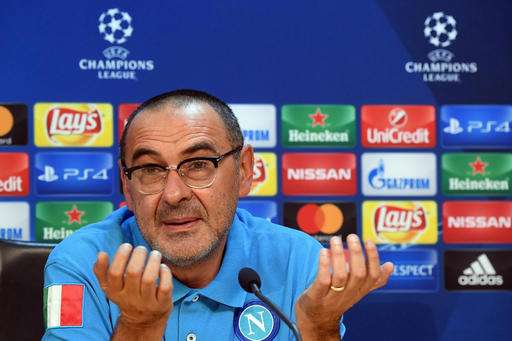 Napoli head coach Maurizio Sarri spoke to La Gazzetta dello Sport in the middle of the international break. Even though his side currently sits atop the Serie A table, the Neopolitan remains a bit cautious regarding their title chances, “This Juventus is the strongest of the last 7-8 years, they have great quality along with an extraordinary coach. For me, they are still the favorites.”

Sarri was asked if he could’ve been the coach at Milan under Berlusconi after Arrigo Sacchi had recommended the former Empoli coach in the summer of 2015. “I wouldn’t have lasted long if it’s true what they say about him interfering with the Coach’s work. With a President who behaves like that it’s hard to win. He won a lot though and was a great director, so I think what’s said about him must be more myth than the truth.”

When asked about the comparisons to Sacchi, Sarri had some strong words, “If you ask me, that comparison is an insult to Arrigo who has won so much, while I’ve won nothing. He wrote footballing history with his results and innovations, and I wouldn’t have existed if not for him. My interest in tactics was born through him.”

To touch upon the upcoming Champions League match against Manchester City, Sarri spoke about Pep Guardiola, “We can say my football is similar to his, although he’s evolved over the years. With Bayern Munich and Manchester City, he’s changed something with respect to Barcelona. The philosophy has stayed the same, but they move in different ways, attacking and defending in different shapes.”

Sarri also touched upon VAR, which has caused some controversy in its infancy. “I’m skeptical. It takes away spontaneity and enthusiasm. You can score, but the excitement is more limited because you don’t know if the goal will be given. Some errors have been avoided, but it’s in an experimental phase. I’d use it much more moderately though.”

And lastly, Sarri spoke regarding his future at Napoli. “On a contractual level, there’s a clause which allows the club and myself to have different solutions. It’s the last thing on my mind right now though. I feel very close to this city and this group, although I know that at a certain point things finish in a natural way.”