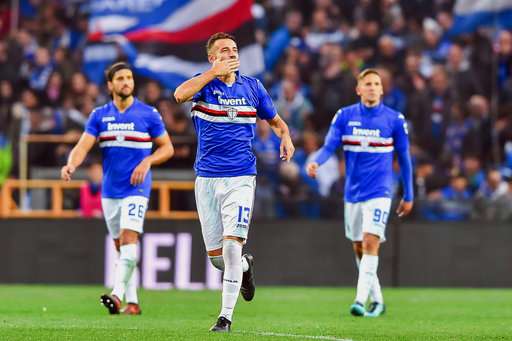 Marco Giampaolo has done brilliant work in the last few years, dating back to a wonderful season with Empoli and a superb debut campaign with Sampdoria last season. This season, Giampaolo has taken Samp to another level and the Blucerchiati sit sixth in Serie A, just two points off Lazio after the coach masterminded a hugely impressive 3-2 win over Juventus on Sunday.

Giampaolo lined up his team in his normal 4-3-1-2 and the midfield diamond was key against Juve’s two central midfielders. Giampaolo’s quartet won the midfield battle comfortably both with and without the ball. Short passing combinations in possession changed to intense pressing and clever positioning out of possession. Looking back, Gonzalo Higuain will regret missing the early chance he had after Federico Bernardeschi brilliantly played him through on goal. Juan Cuadrado will rue his missed opportunity too, after about 30 minutes when he fired wide. Samp were the better side in the first half and had some good chances as Duvan Zapata’s target play created problems for Juve’s defense.

An even first half changed completely in the second as Samp came out even stronger and continued to force their approach upon Juve who were forced to react to Samp and not the other way around. Zapata gave Samp the lead when bullying Stephan Lichtsteiner from a cross and lobbing his header over Wojciech Szczesny. Juve began throwing themselves forward and Khedira got a decent chance, but the imperious Lucas Torreira added to Sampdoria’s lead when Gaston Ramirez pulled Khedira towards the right which opened up space centrally for Torreira to attack. Ramirez slipped the ball into the path of his compatriot who took a touch before firing a blistering strike into the bottom corner. 2-0 Sampdoria.

Torreira then whipped in a free kick which stayed in the box before being squared to Gianmarco Ferrari who made it 3-0. There were incredible scenes at the Luigi Ferraris. Juventus rallied after Ivan Strinic conceded a needless penalty which Higuain converted in stoppage time. The substitute Paulo Dybala then scored a brilliant individual goal in the 94th minute to make it a bit nervous in the stands but it was too late and Samp ran out worthy winners.

The win represented another stunning display and wrote another chapter in the success story that is Marco Giampaolo at Sampdoria. They play wonderful football and they are getting results. The attacking positional play and positionally-oriented defensive structure has been implemented so well that no team has managed to get even a point at the Luigi Ferraris so far this fall. It’s all testament to Giampaolo’s brilliant coaching and his superb team.

Lorenzo Insigne showed why he should have been playing every single second of Italy’s disastrous playoff with his well-timed run and well-taken goal against Milan. Piotr Zielinski scored the second from a brilliant Dries Mertens assist to clinch the win despite the superb late volley from Alessio Romagnoli. Napoli have now opened up a four-point gap over Juventus which will make the clash on the 1st of December even more exciting.

Roma are five points behind Napoli (with a game in hand) but are really consistent and won the Derby della Capitale against Lazio courtesy of goals from Diego Perotti and Radja Nainggolan. It was a great derby between two even sides but Lazio defender Bastos made two mistakes which led to Roma’s goals. Tough to take for the defender as Lazio failed to recover despite Ciro Immobile’s goal from the spot. In truth, the game could have gone either way and it will be intriguing to follow both Roman clubs going forward.

Inter are just two points off top spot after two Mauro Icardi headers gave the Nerazzurri a 2-0 win at San Siro against Atalanta. Icardi has found the net 13 times in Serie A this season and is keeping pace with Immobile and Dybala in the goalscoring charts. If he keeps this form up he can maintain Inter’s title charge on his own. Atalanta will be disappointed as they played well, especially in the first half, but are finding points harder to come by this season. They still look really good given the circumstances though and when they go through in Europe they can focus solely on the league for a few months.

Benevento had lost all 12 of their games this season. In the 13th, at home to Sassuolo, they fell behind after their goalkeeper Brignoli passed the ball straight at his opponents and Alessandro Matri gave the Neroverdi the lead. Benevento equalized when Samuel Armenteros steered Amato Ciciretti’s strike into the net and going into stoppage time Benevento had their first ever Serie A point in within reach. Andrea Costa then conceded a penalty with an idiotic handball from a corner, but Domenico Berardi’s spot-kick hit the crossbar. Surely they could see it out? Sadly, no. They conceded a free-kick which was cleared but led to a corner. From that corner, Federico Peluso headed home and gave Sassuolo the win. You could see the desperation on the faces of Benevento’s players. They must think that point will never come. 13 games. 0 points. It’s a historically poor record. Truth is they have improved under Roberto De Zerbi. He now needs to raise spirits again. They need points, to say the least.

Diego Lopez work at Cagliari has been superb and the immediate results since he took over have lifted Cagliari away from trouble. Joao Pedro’s header gave Cagliari the win over Udinese but the youngster Nicolo Barella took the plaudits with another excellent display for the Sardinians.

It was a game of headers as Chievo visited Torino. Perparim Hetemaj opened the scoring for the visitors but Daniele Baselli equalized when heading home from Joel Obi’s cross. A draw was not what Sinisa Mihajlovic had envisaged and Torino will be disappointed, especially given their impressive draw at Inter last time out. Chievo continues to be their consistent selves.

SPAL have also been consistent and held Fiorentina to a draw on Sunday. Alberto Paloschi gave the newcomers the lead and they looked likely to hold on for a long time but Federico Chiesa got a chance with ten minutes left and took it. Still, a good draw for SPAL but a disappointing result for Fiorentina.

Davide Ballardini’s job at Genoa couldn’t have gotten off to a better start than with a 1-0 win at Crotone. Well, that would have been a win by bigger margins, which should have happened as Genoa missed countless chances but Luca Rigoni’s header was enough to give the Grifone three absolutely vital points. They’re just a point off safety now and if the first game is something to go by, Ballardini could definitely lift Genoa away from trouble.

Bologna performed a superb comeback at the Bentegodi to come from 2-1 down to win 3-2 against Hellas. Alessio Cerci gave Hellas the lead but Mattia Destro equalized. Martin Caceres then restored Hellas’ advantage and they held onto it until the 74th minute when Orji Okwonkwo scored to restore parity once again. Two minutes later, Godfred Donsah won it for Bologna who continues their fine start to the season. Hellas are in trouble at the bottom.

The Uruguayan midfielder has been superb this season and capped a wonderful display at the heart of Sampdoria’s midfield with a blistering strike to make it 2-0 against Juventus. Sampdoria won the midfield battle, both with and without the ball and Torreira’s battling performance and crisp passing was key.

Giampaolo’s Sampdoria have been sublime all season but the performance against Juventus was something special as Samp went 3-0 up against the reigning champions. Juve rallied with two late goals but Giampaolo still came out on top after masterminding a stellar display.

Alessio Romagnoli’s superb volley in stoppage time was quite special. Unfortunately, it counted for little as Napoli still beat Milan.