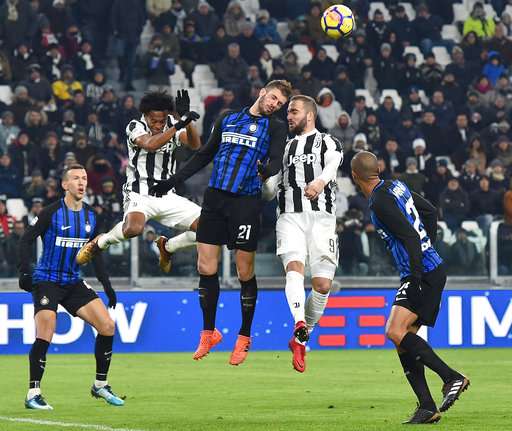 Inter went to Turin as league leaders. After leaving with a point, they retained their position at the top of Serie A. After 16 games, Luciano Spalletti’s men are still unbeaten and thriving. Could this even be the year when the Serie A trophy returns to the blue and black half of Milano for the first time since the treble in 2010?

Spalletti’s men went into the clash with Juventus as the favorites. After all, Juve have only lost at home once in over a year and Allegri’s men had kept clean sheets in the last four matches despite going up against teams such as Barcelona and Napoli. After a strong start from Inter, Juve grew into the game and took control of proceedings after 25 minutes or so. Surprisingly, it was down both flanks where Juve managed to trouble Inter; Juan Cuadrado had a big advantage in his individual battle against Davide Santon and the Colombian consistently aimed his crosses towards Mario Mandzukic’ runs inside from the left wing. In that part of the penalty area, the Croatian had a strong height advantage against Danilo D’Ambrosio and got a huge chance in the first half when he saw two attempts stopped by Samir Handanovic straight after each other.

Inter struggled to cause Juve troubles at the other end in the second half as Juve kept up the pressure. Significantly for this new-look Inter though is the robustness at the back. In the last couple of seasons they’d crumbled under the pressure they were enduring, but the base of the side with Skriniar and Miranda ahead of Handanovic is rock-solid so far this season. Together with a superb cameo of defensive midfielder Roberto Gagliardini, they managed to keep Juve out, earning an impressive clean sheet and a vital point, especially for their confidence. They did struggle in attack, but a point in Turin is always a great result and it keeps them top of the league with almost half of the season played. As mentioned, they’re still unbeaten too, further demonstrating how solid this defense is. Maybe this could be their year to end the wait for a Scudetto? If not, Champions League football should return to San Siro next year at the very least.

Juve then? They’ve had a great week with the win at Napoli, qualification in the Champions League and now this point. They’ll be disappointed it wasn’t three, but they will be in the mix as we enter the second half of the campaign and are still favorites. Their five successive clean sheets impress as well for a side supposedly having defensive problems. Juventus will be alright and we have a spectacular title race in front of us.

0-0 was a common result this weekend as Roma couldn’t find a winner away at Chievo while Napoli had to settle for a goalless draw against Fiorentina. Roma still have a game in hand which would see them level on points with Juve if they win. They’d just be two behind Inter then. Napoli have now gone goalless from two straight matches and they are showing signs of losing pace. They’re still just a point behind Inter but the form is definitely dipping right now.

Sampdoria thought they had returned to winning ways after Fabio Quagliarella’s brace sent them 2-0 up at Cagliari early in the first half. The Sardinians rallied though and after Diego Farias scored the most stupid goal you’ll see all season (goalkeeper Emiliano Viviano fired the ball at the Brazilian and into the net), Leonardo Pavoletti’s thumping header earned Cagliari an impressive point.

At San Siro, Milan finally won under Gennaro Gattuso after two strikes from Giacomo Bonaventura either side of Simone Verdi’s equalizer for Bologna gave the Rossoneri a well-needed win. Given Samp’s recent results, Milan could be able to salvage a Europa League finish if they can increase their consistency.

Matteo Politano had a brilliant day as he delivered an assist to Edoardo Goldaniga’s opener and a stunning goal of his own to give Sassuolo a huge win at the bottom. Francesco Acerbi scored an own goal to bring Crotone within reach of a point but the game finished with a vital win for the Neroverdi.

Hellas Verona have a really interesting squad. Two of the most well-traveled members of their team are Alessio Cerci and Martin Caceres and the duo each scored in the first half away at SPAL to set Hellas on the way to an impressive win. However, SPAL came back with a late rally as Alberto Paloschi and Mirko Antenucci scored in the 86th and 88th minute, just 2 minutes and 15 seconds between the goals, and earned a point. Heartbreak for Hellas, but they had to see that one out.

Massimo Oddo’s spell at Udinese has started brilliantly with two wins from three Serie A matches after going through six months as Pescara coach last year without a win. Against Benevento, Antonin Barak opened the scoring before Kevin Lasagna finished it with his strike to make it 2-0. Udinese are on course to stabilize themselves in the middle of the table after these back-to-back wins.

Torino secured a truly impressive win in Rome as they left the Olimpico with a 3-1 win against Lazio. They were tremendously helped by Ciro Immobile’s sending off at the end of the first half, and in the second goals from Alex Berenguer and Tomas Rincon gave them a 2-0 lead. Luis Alberto pulled one back for Lazio, but Simone Edera came off the bench to clinch the win for Toro. Big win for Torino and a big loss for Lazio who lose ground at the top.

When Andrea Bertolacci gave Genoa an early lead against Atalanta, Genoa’s fans were hoping a first home win of the season was perhaps finally coming. However, former Genoa coach Gian Piero Gasperini’s Atalanta turned the game around with goals from Josip Ilicic and Andrea Masiello. Tough to take for Genoa who saw Goran Pandev and Adel Taarabt miss big chances when the score was still 1-1.

A superb cross to set up the opening goal and a lovely turn and strike to score the second, Politano had a great game against Crotone as Sassuolo earned a vital win.

Oddo has started superbly in Udine with two wins in three matches to lift the Zebrette away from trouble.

I’ve gone for Quagliarella’s second at Cagliari. Mainly because of Gaston Ramirez lovely back-heel and then because of Quagliarella’s composure and general understanding of geometry as he curled the ball into the perfect angle. Brilliant.