Can anyone halt Juventus’ era of dominance? 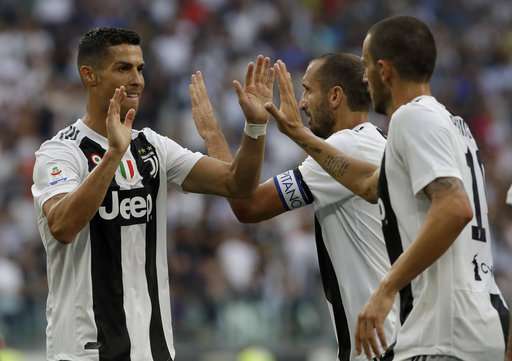 There can be no doubts over who stands head and shoulders above the rest in Italian football right now. Juventus have won seven consecutive league titles and claimed the Coppa Italia in each of the last four seasons to mark themselves as a truly formidable outfit domestically and across Europe. As a new season is underway, the question remains, can they be stopped?

Last season, Juventus appeared vulnerable at times. Having lost Dani Alves and Leonardo Bonucci, there were fears that the defence was not as watertight as previous years. However, the Bianconeri did what they do best, grinding out results to keep pace with Napoli, before overtaking them in the final stages of the campaign. As the season concluded, there was the sense that Napoli let a big chance slip through their fingers, throwing away the title as much as Juventus won it. So, how have Juventus responded? By making a statement in the transfer market that few saw coming.

When Cristiano Ronaldo announced after the Champions League final that he wished to leave Real Madrid, his remarks were met with some skepticism. Was it a ploy to get an improved contract? Was he going to return to Manchester? A move to the Italian champions appeared unlikely, but fast-forward a couple of months and that’s exactly what happened. A major coup for Italian football, and after a year where Gonzalo Higuain failed to hit the heights of his opening season at the club, Juventus now have the lethal striker that they crave.

The signing of Ronaldo grabbed most of the headlines, yet this was far from the only business conducted by Juventus. After a controversial move to Milan last year, Bonucci returned to Turin. His form dipped dramatically in late 2017, but he remains a classy operator and can be expected to rekindle his outstanding partnership with Giorgio Chiellini this season. Emre Can offers strength in depth to an already impressive midfield, whilst the acquisition of Joao Cancelo ought to bolster the defensive ranks as Juventus seek an adequate replacement for Alves. Stephan Lichtsteiner and Mattia De Sciglio struggled to convince that they were up to the task, but after enjoying a fine second half of last season in a stuttering Inter Milan side, Cancelo looks an exciting prospect that could establish himself in the backline.

Who will challenge Juventus’ supremacy?

Last year’s runners-up, Napoli, endured a difficult summer. After pushing Juventus to the brink, they lost their manager and midfield general to Chelsea, leaving many to wonder whether they can mount a serious title push again this season. Maurizio Sarri’s side played some outstanding football during his reign but ultimately were unable to budge Juventus off their perch. Meanwhile, Jorginho was an unsung hero in the Napoli midfield, protecting the back four with minimal fuss, whilst displaying composure when in possession. He leaves behind a hole that Napoli may struggle to fill. The appointment of Carlo Ancelotti was an intriguing one. Ancelotti has a point to prove after an unconvincing tenure at Bayern Munich. Working with a similar squad to Sarri, he will hope that Napoli can build on last season, as they aim to topple Juventus.

Roma were the surprise package in the Champions League earlier this year, making the semi-finals. However, domestically it was an all too familiar story. Despite possessing obvious quality, they have long been seen as a team that fall short in the final reckoning. Roma have always admired young talent, and that has been evident again this summer with the additions of Bryan Cristante and Justin Kluivert. The latter will be one to watch for his surname alone, but at 19 may require time to settle in the capital. Stephen N’Zonzi and Javier Pastore have also arrived, bringing energy and creativity to the midfield. Yet Roma fans face their perennial concern: with the exits of Alisson and Radja Nainggolan, they have sold arguably their best two players. Can Roma keep doing this and expect to remain in contention for titles? It’s a tough ask.

Finally, there is Inter Milan. After stumbling into the last Champions League place on a dramatic final day in May, the club have recruited heavily. Signing Nainggolan and Stefan de Vrij from their Rome rivals signalled early intent, whilst securing the versatile Kwadwo Asamoah looks a shrewd piece of business. Much is also expected of the Argentinian forward, Lautaro Martinez. After exploding onto the scene in his homeland, he will now look to develop alongside fellow countryman, Mauro Icardi. Inter are desperate to return to their former glories and may see this season as their chance to reel in their Turin counterparts.

Will it be another title for Juventus?

It is hard to look past the defending champions. After a summer of big spending, it seems that they have actually increased the gap between themselves and their competitors. Perhaps the bigger question is can they claim the Champions League crown that has alluded them in recent years? One thing is for sure, with Ronaldo leading the charge, it will be well-worth watching.