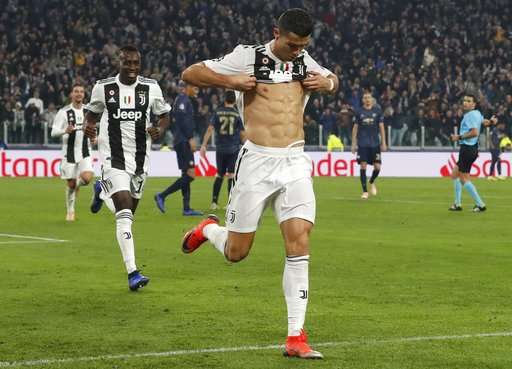 Manchester United scored twice in the space of three minutes to hand Juventus their first defeat of the season on Wednesday night. A win for the Italian champions would have seen them secure qualification to the last 16, as well as topping the group. They must now wait a little longer following this shock defeat.

Having outclassed their opponents in the reverse fixture just a fortnight earlier, Juventus entered the game as the clear favourites. Yet there was very little to choose between the two sides in the first half. Alexis Sanchez almost latched onto a through ball, with United showing a rare glimpse of attacking promise, before Juventus created the best chance of the opening 45 minutes. Neat passing set up Sami Khedira to shoot unopposed from inside the area, but he scuffed his effort against the post.

Into the second half, Juventus found another gear. Paulo Dybala was unfortunate to watch his curled finish rattle the crossbar, his look of bemusement highlighting the growing frustration at the hosts struggling to break the deadlock. They would need something special to take the lead. Step forward, Cristiano Ronaldo. Leonardo Bonucci floated a ball over the top, yet there was still plenty to do for the Portuguese striker. His finish was exquisite, rifling a volley into the corner past the helpless David de Gea.

Ahead and in full control, Juventus had a series of opportunities to wrap up the game. Miralem Pjanic twice went close, whilst Juan Cuadrado was guilty of a glaring miss when teed up by Ronaldo. Inside the final five minutes, United punished Juventus’s inefficiency in front of goal. They levelled matters thanks to a Juan Mata free-kick and earned themselves another free-kick in the final minute of normal time. This one from out wide caused just as many problems as the previous one, as Ashley Young’s ball in the box led to panic in the Juventus defence, with the ball eventually finding its way into the net bouncing off both Bonucci and Alex Sandro.

An unlikely victory for United, one that manager Jose Mourinho revelled in. The former Inter Milan boss was jeered for much of the match, but had the last laugh, taunting the Juventus fans by cupping his hand to his ear at the final whistle. Juventus remain on course to win the group, and amongst the favourites to lift the Champions League trophy in June. This was a setback though, as Mourinho’s United dealt a blow to their aura of invincibility.

Inter Milan edged closer towards the last 16 on Tuesday, with Mauro Icardi’s late equaliser earning them a 1-1 home draw against Barcelona. Goalkeeper Samir Handanovic had to be on top form to repel a Barcelona frontline still missing Lionel Messi, not yet fully recovered from his recent broken arm. Yet the visitors did finally go in front, an assured finish from Malcom doing the damage. Icardi made his mark in the closing minutes though, wriggling free to score past a crowd of Barcelona defenders. Inter have a three-point advantage over Tottenham, with two games to play. A trip to Wembley awaits next.

Napoli came from behind to draw 1-1 with PSG, a result that keeps them firmly in the hunt for a last 16 place. Juan Bernat opened the scoring for the French side in first-half stoppage time, only for Lorenzo Insigne to equalise from the penalty spot shortly after the hour mark. Following Liverpool’s shock loss to Red Star Belgrade, Napoli are now back on top of the group, joining Liverpool on six points, with PSG a further point behind. This three-way battle looks set to go to the wire.

Roma took a giant step towards the knockout stages, defeating CSKA Moscow 2-1 in Russia. Konstantinos Manolas gave the Italians the perfect start, but they were pegged back shortly after half-time through an Arnor Sigurdsson goal. The turning point arrived minutes later, as Hordur Bjorgvin Magnusson was sent off for the home side, which Roma capitalised on, Lorenzo Pellegrini netting the winner. Just one point from the final two matches is required for Roma to advance into the last 16.

Lazio eased into the last 32 of the Europa League, seeing off Marseille 2-1 on Thursday evening. Marco Parolo and Joaquin Correa scored either side of the break to put Lazio into a handsome lead, before the former gifted Marseille a way back into the game when his sloppy pass was intercepted, leading to Florian Thauvin finding the net. Last year’s finalists could not find another though, meaning they crash out of this year’s competition after just four games.

AC Milan held Real Betis to a 1-1 draw in Seville, ensuring that they move towards a place in the next round. Betis were deservedly ahead at the interval through Giovani Lo Celso’s deflected volley, but Milan fought back in the second half and levelled proceedings when Suso’s free-kick evaded everyone and drifted into the far corner. Milan are now joint second with Olympiakos, yet have a superior head-to-head record at this stage ahead of their showdown on the final matchday in December.