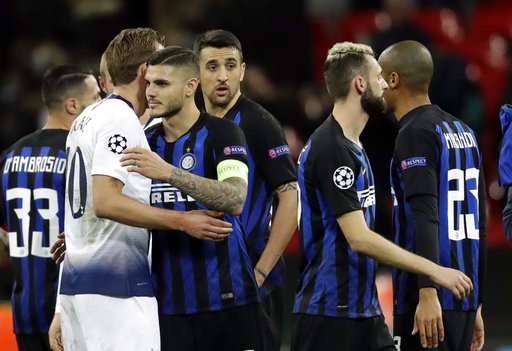 Spurs edge out Inter to set up final day showdown

Christian Eriksen struck ten minutes from time to earn Tottenham a 1-0 win over Inter Milan on Wednesday night, giving the London club a lifeline in their pursuit of a place in the last 16 of the Champions League. Inter, who required a point to confirm their spot in the knockout stages, must now wait for what promises to be a dramatic final matchday next month.

Having lost 2-1 in the reverse fixture in September, Tottenham knew that only a win here would suffice. They looked to stamp their authority on the game from the outset, enjoying the better of the first half. The first big chance fell to Lucas Moura, but his tame effort from the edge of the area was easily held by Samir Handanovic. The Inter keeper was less comfortable a few minutes later though, as Harry Winks sent a curling effort past him, only to see it clatter against the crossbar and stay out.

Into the second half, and Tottenham continued to push for the crucial breakthrough. With Inter holding firm, Mauricio Pochettino opted to bring on Son Heung-Min and Christian Eriksen. The pair, who were surprisingly omitted from the starting line-up after starring in the weekend win over Chelsea, added some much-needed flair to the Tottenham attack. The latter set up a golden opportunity for Jan Vertonghen, which the Belgian defender spurned as his header drifted wide.

Inter were not offering much of an attacking threat but did conjure up a rare chance of their own, Hugo Lloris having to remain alert at his near post to keep out Ivan Perisic’s fierce shot. Time was running out for Tottenham, but they remained patient and got their reward. The impressive Moussa Sissoko surged forwards from midfield before feeding Dele Alli, who in turn laid the ball off for Eriksen to run onto and dispatch past Handanovic.

The final whistle was greeted by relief from the Tottenham fans, who now know that their Champions League fate is back in their own hands. Tottenham and Inter are level on seven points going into matchday six, with Tottenham holding the edge in the head-to-head stakes. Inter must better Tottenham’s result, as they face PSV Eindhoven at home, whilst Pochettino’s men face the daunting task of travelling to group winners, Barcelona.

Juve march on, Napoli on the brink, Roma safely through

Juventus booked their place in the final 16 on Tuesday night, overcoming Valencia 1-0 in Turin. Despite a lacklustre display, with chances few and far between, Juventus produced the key moment of quality, as Cristiano Ronaldo’s fancy footwork created a tap-in for his strike partner Mario Mandzukic.

Napoli closed in on qualification for the knockout stages by beating Red Star Belgrade 3-1. Marek Hamsik settled any nerves early on, and Dries Mertens scored either side of half-time to ensure a comfortable victory in Naples. After Liverpool lost in Paris on Wednesday, Napoli will travel to Anfield in December knowing that avoiding a 1-0 defeat, or loss by two clear goals will be enough to see them into the next round.

Roma suffered a 2-0 defeat at home to Real Madrid, but still secured their spot in the last 16. Thanks to Viktoria Plzen’s shock win against CSKA Moscow in the early kick-off, Roma entered the game with qualification already assured. Goals from Gareth Bale and Lucas Vazquez cemented Madrid’s place at the top of the group.

AC Milan avoided a major upset, coming from behind to beat Dudelange 5-2 and move closer to a place in the last 32 of the Europa League. Patrick Cutrone had put Milan in front, yet Dudelange netted twice in ten minutes to take the lead. A humiliating loss appeared a possibility, but Milan finished strongly to see off their resilient opponents. Two own goals aided them along the way, with Hakan Calhanoglu and Fabio Borini also finding the target.

A second-string Lazio outfit were beaten 2-0 by Apollon Limassol in Cyprus, meaning that the side are destined to finish second in their group. Having guaranteed qualification on matchday four, Simone Inzaghi left a number of key players at home, and his fringe players were made to pay for a lack of cutting edge in the final third. A spectacular overhead-kick from David Faupala set the hosts on their way before Sasa Markovic put the game to bed in the closing stages.