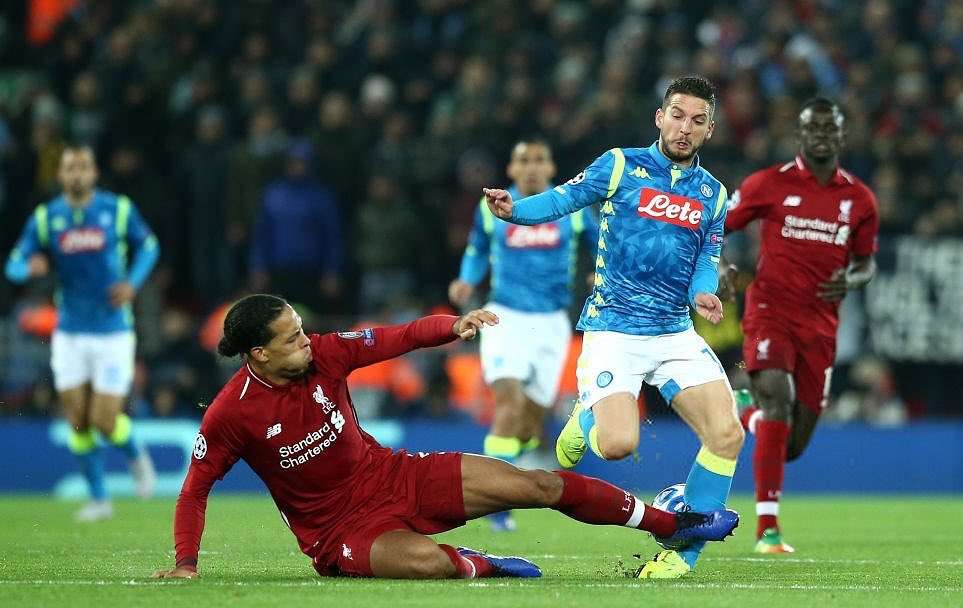 Mohamed Salah scored the only goal of the game to seal Liverpool’s place in the last 16 of the Champions League at the expense of Napoli. Liverpool required a 1-0 victory or a win by two clear goals to move ahead of Napoli in the group, and Salah and their goalkeeper, Alisson, stepped up on a dramatic night at Anfield.

Liverpool started on the front foot and should have been ahead inside seven minutes. Andrew Robertson picked out Salah, who was in acres of space inside the area, but the Egyptian’s first touch let him down for once, as the ball dribbled through to David Ospina. Napoli offered a threat of their own, with Marek Hamsik sweeping a shot just over barely a minute after Salah’s chance.

After an action-packed opening, the game began to settle down. That was until just after the half-hour mark when Salah produced some individual brilliance to give Liverpool the lead. Having found space in the box, he jinked past Kalidou Koulibaly with ease and slid the ball through the legs of Ospina into the far corner.

Despite going behind, Napoli now knew that scoring just one goal would force Liverpool to need another two. The problem was that Liverpool were now starting to dominate. Attacking ‘The Kop’, the home side found their rhythm in the second half, creating numerous chances to put the game to bed. Salah went close twice, whilst Sadio Mane missed three guilt-edged opportunities, failing to even hit the target with two of his finishes.

The longer the game went on, it seemed inevitable that Napoli would get one chance to rescue themselves. It arrived in the second minute of added time. A long ball into the box was missed by everyone except Arkadiusz Milik at the back post. His shot looked a certain goal, but Alisson somehow parried the ball away, seemingly justifying his lofty summer transfer fee in one moment.

Napoli will feel hard done by, having only lost one of their group games. However, they must settle for a place in the Europa League on a night that belonged to Liverpool.

Inter Milan blew their chance of making the knockout stages of the Champions League, drawing 1-1 with PSV Eindhoven in a result that sees them drop into the Europa League. Kwadwo Asamoah’s mistake lead to Hirving Lozano giving PSV a surprise lead. Inter fought hard after the break, levelling with fifteen minutes remaining through a Mauro Icardi header. At that stage, Inter were heading through, but that changed when Lucas Moura equalised for Tottenham in Barcelona five minutes from time. Inter now needed a winner, and when Lautaro Martinez’s stoppage-time header sailed over, their fate was sealed.

Juventus suffered a shock defeat in Switzerland, losing out 2-1 to Young Boys. Massimiliano Allegri opted to rest a number of key players and was made to regret his decision when Guillaume Hoarau scored either side of halftime. Paulo Dybala pulled one back for the visitors late on. Fortunately for the Italian side, Manchester United were beaten 2-1 in Valencia, meaning that Juventus clung on to the top spot.

Roma’s miserable form continued on Wednesday night as they lost 2-1 to Viktoria Plzen. Jan Kovarik and Tomas Chory netted either side of Cengiz Under’s strike to hand the Czech side the three points and a place in the Europa League. Roma had already secured their spot in the last 16 of the Champions League ahead of this match, and will now look towards Sunday’s crucial league game with Genoa as the pressure mounts on Eusebio Di Francesco.

AC Milan slumped to a 3-1 defeat in Athens against Olympiacos, which sent them crashing out of the Europa League. Gennaro Gattuso’s men knew that they could afford to lose by one goal to progress, yet they collapsed in a frantic second half. Pape Abou Cisse gave the Greek side hope, heading them into the lead on the hour. Cristian Zapata then had a whirlwind two minutes, scoring a calamitous own goal at one end, before redeeming himself by bundling home from a corner at the other. There was to be one final twist, as Ignazio Abate was penalised for shirt-pulling, and up stepped Kostas Fortounis to score from the spot and send Olympiacos through.

Eintracht Frankfurt came from behind to beat Lazio 2-1 in Rome, making it six games without a win in all competitions for the hosts. Joaquin Correa’s composed finish had put Lazio in front, but Mijat Gacinovic then took centre stage, curling home a stunning equaliser and then producing a fine reverse pass for Sebastien Haller to tap home the winner. Lazio go through in second place, despite their worrying form

The draw for the Knockout Rounds of both of Europe’s elite competitions will take place on Monday 17 December.