FEATURE | A fan’s journey through Parma’s revival from bankruptcy 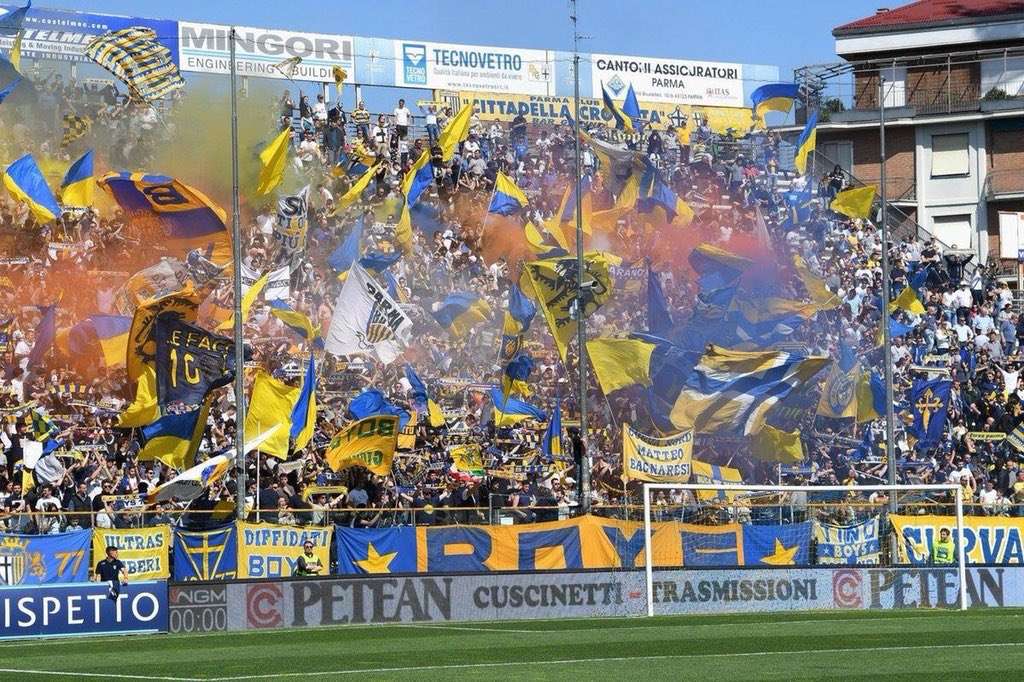 18 May 2014. I stood among friends, family, and fellow Crociati in a jam-packed Curva Nord at the Stadio Ennio Tardini. I looked round about me as Andrea De Marco blew his full-time whistle, through the sea of yellow and blue scarves and flags that blocked my view of the pitch. Grown men wept, mothers hugged their sons, friends hi-fived in celebration as Parma had just rounded off a memorable season by ‘qualifying’ for the Europa League.

As a fan, life couldn’t get any better. The 2013/14 season was Parma’s fifth straight season back in Italy’s top flight. Despite constantly flirting with relegation, Roberto Donadoni began working miracles in The Ducali’s centenary season; an incredible 17 game unbeaten run would see Parma emerge as one of the favourites for a European place going into mid-March. An Amauri double on that May evening against Livorno would confirm Parma’s return to European football. Little did the Parma faithful know, that the little fat guy leading the celebrations on the pitch that night was, in fact, a crook that had already run the club into the ground.

As I said life couldn’t be any better as a Parma fan, the glory days were finally returning. The morning of the 19th May, the city was buzzing. As a fan was high as a kite, my team were the talk of the press, talk of the town; everyone seemed genuinely pleased that Parma were back. However, as the saying goes the higher you are the harder you fall….

And my god how we fell. In just a matter of ten months after the wild celebrations in Piazza Garibaldi, there was no Parma FC. No team to support, our stadium was ‘Closed for Business’ as the sign read outside, players and staff hadn’t been paid, points had been deducted, games canceled. The dream of May 2014 was soon becoming a desperate nightmare. How can something you love and care for so passionately be taken from you in a matter of minutes, as that’s all it took. In a mere ten minutes, the courts declared Parma FC bankrupt, all thanks to the complete mismanagement of Tommaso Ghirardi, the little fat guy mentioned earlier. I don’t think I’ve ever been heartbroken before, but the feeling of someone taking the football team you’ve loved as boy away from you must be pretty close.

The confusion of the weeks and months that followed almost made me fall out of love with the game. I had no team to support, I didn’t care anymore, and that’s how I felt. It was more pure anger towards Ghirardi and co rather than at football itself.

“I’d be prepared to play in Serie D for Parma if it was necessary. After seven years, I feel like this shirt is mine and I’m available to play for this club at whatever level”

I remember watching Alessandro Lucarelli passionately speak these words, as the new Parma Calcio 1913 were being born and looking set to play Serie D football, Italy’s fourth division, the following season. I was always asked by friends and colleagues, ‘It must be rubbish to be in Serie D, no?’ or ‘That’s a shame Parma are in Serie D.’ For me I was just glad I had my team back, with good people at the helm, I saw it as a new experience and exciting journey ahead.

Exciting it was. Parma were pretty much winning every week and the players communicated with fans on social media. It was a bizarre experience but one I’ll never forget as Luigi Apolloni guided Parma to the title without tasting defeat, something I doubt I’ll ever see again.

My first Serie D experience was a trip to Correggio, as Correggese and Parma played out an awful 1-1 draw. As I sat there in a makeshift stand made out of scaffolding, I smiled to myself and thought, this is quite fun, makes a difference visiting the San Siro or the Stadio Olimpico. You could hear the players talk, listen to the managers roar out their instructions; I had never experienced football this way as a fan.

As Parma breezed through Serie D, I think many thought their time in Lega Pro would be much the same. Despite pushing for promotion, Parma made life difficult. After a string of really poor results and performances, Gigi Apolloni was shown the door, with the president of operations Nevio Scala right behind him. This led to more confusion, no coach, and no president. Here we go again was the feeling but then a rather strange decision came. As many talked about Gianfranco Zola or Hernan Crespo for the vacant manager position the club announced a relatively unknown in Roberto D’Aversa to guide Parma to Serie B.

D’Aversa did just that, albeit, via the playoffs, the city felt something similar to that of the night of 18 May 2014. Fans filled the streets to celebrate, Parma were back in Serie B. Despite the joyous feeling among the Parma faithful, it was time to get serious. The back-to-back promotions didn’t go unnoticed, as Chinese businessman Jiang Lizhang showed a keen interest in the club. Surely not more dodgy businessmen getting involved with the club was in many people’s minds. Lizhang would go on to purchase 60% of the club but kept the fans happy by Nuovo Inzio group kept 30% and the fans also kept 10%. Lizhang would also make a favourable move amongst fans by announcing Hernan Crespo as the club’s Vice President.

“Parma will rise again like a giant to take back its rightful place in Italian football. I hope that’s we can soon celebrate Serie A with the team and fans,” beamed Lizhang at a press conference.

He was right Parma would rise again. Despite a really poor run of form at the beginning of 2018 and fans calling for D’Aversa’s head, Parma somehow remained in with a shout of promotion in the final rounds of the season. Dropping points away at Pro Vercelli as well as the defeat to Cesena meant Parma would have to hope Frosinone would slip up at home to Foggia and Parma would have to see off Spezia to gain promotion on the last day of the season.

As I sat there last Friday night, I couldn’t quite believe how quickly things can turn. Just four years ago, I was standing celebrating my team qualifying for the Europa League. Who’d have thought after that night I would have no club, reform in Serie D, win back-to-back promotions and be sitting here just 90 minutes away from being back in the top flight of Italian football. As a certain Sir Alex Ferguson once said, “Football, bloody hell.’

Bloody hell indeed Sir Alex. That’s exactly what I thought when I saw Roberto Floriano breakaway in the 89th minute to secure a point for Foggia, with Parma already 2-0 winners in Spezia. It was over, it’s not often I get emotional but I think four years of emotion came pouring out me last week, as I stood there wiping tears from my eyes, screaming “WE DID IT!! WE DID IT!!”