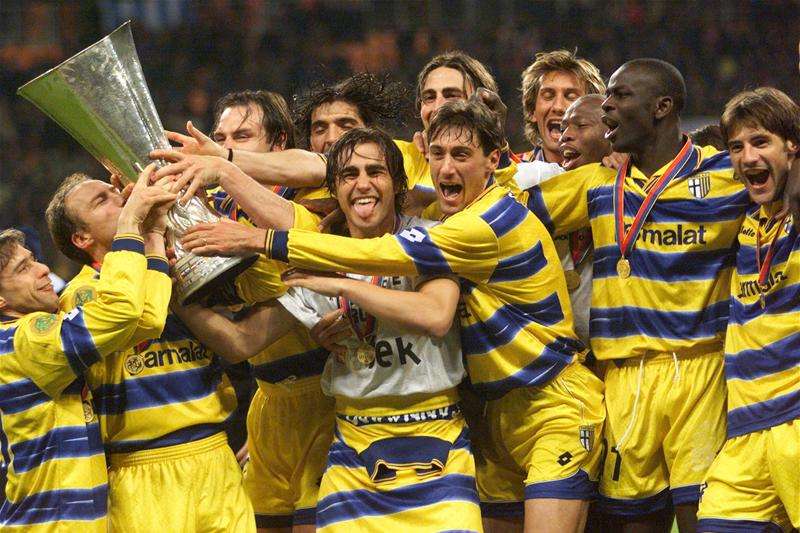 “Two in the middle. In from Veron, Crespo lets it go… CHIESAAAA!!! Oh, lovely goal… lovely goal” cried Barry Davis a night that crowned favourites Parma their second UEFA Cup triumph in 1999. Roberto Sensini lifted the trophy that day for the Gialloblu and Parma announced themselves as one the best sides in Europe. Nobody could have thought back then that sixteen years later their football club would seize to exist. A team that had the world’s most expensive goalkeeper – Gianluigi Buffon who moved from Parma to Juventus for £33 million in 2001, Hernan Crespo – a player that himself smashed the world transfer record when he left Parma for Lazio in a £35.5 million deal in 2000. A team that also included Juan Sebastian Veron who left for £18 million, World Cup and European Cup winner Lillian Thuram who himself left for £22 million, Chelsea legend Gianfranco Zola, 2006 Ballon d’Or winner Fabio Cannavaro and Italian goal-scoring machine Alberto Gilardino. How does a team with so much talent fall so far from grace?

Parma Associazione Calcio in their early years competed in Serie C and B and were not unfamiliar with financial turmoil after being ordered into liquidation back in 1968. Unfortunately for Parma, this was not to be the last time. The club has played its home matches at the Stadio Ennio Tardini, often known as Il Tardini, since 1923, with a capacity of 22,352 fans. The appointment of Nevio Scala in 1989 proved to be the turning point for the Ducali as he managed to guide them to promotion into Serie A with a 2-0 win over A.C. Reggiana back in 1990.

The investment from the global organization Parmalat proved to be one of the best, yet one of the worst things to ever happen to Parma Associazione Calcio. Everything snowballed after the agreement between Parma and Parmalat became public as they went from being just another team in Italy to being one of the big four teams in the country. Their success coincided with the success of the league in general. Serie A was the home to some of the finest footballers in the world with Van Basten, Baresi, Buffon, Maradona, Ronaldo, Maldini, Del Piero, Gullit, Batistuta, and Zidane all applying their trade in Italy. Italy’s reign came to an end early in the new millennium with the global attraction of the Premier League and later La Liga outdoing Serie A. Oppositely, as teams in England grew financially stronger due to an increase in sponsorship and revenue money, Italian sides were facing financial difficulties.

Parma made their debut in UEFA competitions in 1991 and it did not take long before won a European trophy as they beat Antwerp at Wembley in the European Cup Winners Cup in 1993. While they could not retain their trophy a year later losing to Arsenal, more trophies followed including Parma’s first UEFA Cup beating Juventus in the final. Scala led Parma to their first four major honours before being replaced in 1996 by now Italian legend Carlo Ancelotti. It did not take him long to show his managerial talents as he guided Parma to second in the league, their greatest Serie A finish after a squad overhaul in 1997. They consequently made their Champions League debut the following year. Ancelotti’s success led to him being poached by Italian giants Juventus.

Alberto Malesani was installed as coach in 1998 and had a successful two years in charge as he won a double in his first campaign lifting the Coppa Italia beating Fiorentina in the final which was followed by a second UEFA Cup win in Moscow with a 3-0 win against Marseille. The following year they managed a Suppercoppa Italiana victory over league champions Milan in August. Subsequently, their success led to the big Italian clubs wanting their players as Hernan Crespo left for Lazio in a then-world record fee of £35.5 million. Gianluigi Buffon joined Juventus for £33 million the world record fee for a goalkeeper, which that still stands today. Fabio Cannavaro and Lillian Thuram left for upwards of £20 million and Juan Sebastian Veron left for £18 million. Which begs the question, where did all this money go?

As said earlier, Parmalat was both the best and worst thing that happened to Parma. You’ve seen the successes, now here is the failure of Parmalat. The global company went bankrupt in 2004 with debts of $20 billion and fraudulent activity at Parmalat worth up to €10 billion. Essentially, there were certain groups of people that were taking money out of the club that became unspoken for. After three years of being kept alive by administrators, Tommaso Ghirardi bought the club out of administration in 2007. After flirting with relegation for a few years they eventually succumbed to the drop in 2007-08 but managed to get back to Serie A on the first try. After many managerial changes due to Ghirardi’s ‘trigger-happy’ finger, they did manage to sustain mid-table finishes for four years before finishing sixth and in theory qualifying for European football for the first time under the ownership of Tommaso Ghirardi. However, due to late payments of income tax on salaries they were unable to qualify for a UEFA License and were therefore, not able to compete in European competitions. This, in turn, lead to Ghirardi becoming disinterested with the football club. At this point there were around 300 players registered to the football club, the most in Europe. Over half of those were registered as first team players, many of which were loaned out or co-owned by other football clubs. This was a huge strain on the clubs finances and ended up being the catalyst to players not being paid as well as electricity bills and security costs not being covered for matches. Club legend Hernan Crespo, who was the youth team coach at Parma for the 2014-15 season, famously said that his players had to take cold showers after matches and training sessions because the clubs hadn’t paid the electricity bill.

The club was eventually sold for one solitary euro, an embarrassment for the Parma fans. To think the club that they love was being sold for such a nominal figure, so small that you could buy a pint of milk and a loaf of bread and it cost nearly double than Parma was sold for. A succession of ownership changes led to eventual bankruptcy in March 2015 with debts of around £278 million as well as months of unpaid salaries.

So where are they now? A crowd-funded campaign called #WeAreParma allowed the fans to get their club back. Parma, now under a different name of Parma Calcio 1913, was competing in the fourth tier of Italian football after being declared bankrupt in 2015. But after all the heartache of the last decade the fans can worry no more. Club legend Alessandro Lucarelli and company have managed to earn themselves back-to-back promotions, returning to Serie B. Is it the UEFA Cup? The European Cup Winners Cup? The Coppa Italia? No. It is much more than that. Fans have their club back.