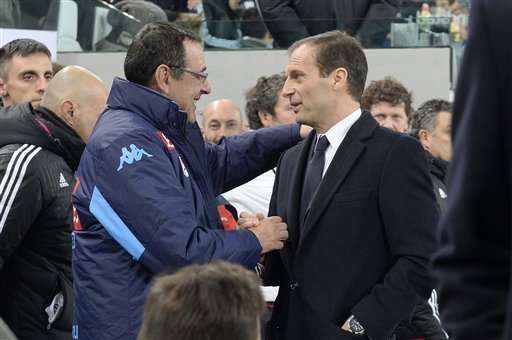 With Juventus and Napoli peeling away from the rest of Serie A in recent weeks, is it becoming a two-horse race?

Well, it certainly looks like that is the case, with Napoli surprisingly leading the pack in Serie A this season on 51 points and defending champions Juventus just a point behind.

In third place, it is Inter Milan, but they have fallen off the pace in recent weeks and are now nine points off leaders Napoli, and it looks as though Serie A could now be decided between Napoli or Juventus.

Napoli have been a joy to watch this season, with free-flowing attacking football and have prized themselves on excellent defending. Mauricio Sarri appears to have a tremendous relationship with the players and they are deservingly top of Serie A, with four months of the season to spare.

However, there is still a long way to go and Juventus look as though they are going to challenge Napoli for the title. The Old Lady stuttered at the start of the season but they are a real force to be reckoned with, make no mistake about that.

They have a player in the form of former Napoli star Gonzalo Higuain, who can change a game in an instant, too. But, if you look at the two teams, overall you may say Napoli have a more balanced team this season.

Juventus have often been too predictable this season and this was shown earlier in the season, but the difference between them and Napoli is that they have hacked the ‘winning ugly’ side of the game.

Napoli haven’t had to really show that yet as they have been so clinical in-front of goal. Marek Hamsik, Lorenzo Insigne, Dries Mertens and Jose Callejon have all been in sublime form this season for Sarri’s men.

They have managed to accumulate a total of 25 goals between the four of them, and it puts them incredibly good stead moving forward, as if they continue in that vein of form, it could see them upset the odds and lift the Serie A title at the end of the season in May.

Mertens, in particular, has shone in an attacking sense for Gil Azzurri and has 10 goals in 20 appearances, and also has six assists to his name this season and he could be key if Napoli are to win the Serie A.

Juventus have been there before, though, and they will still very much fancy their chances. They know how to win titles. They have lifted the Serie A trophy more than any other side, having lifted it 33 times, compared to Napoli’s twice and come to the late stages of the season, their experience could eventually tell.

Can Napoli maintain their intensity and brilliance going forward, and prevail? Or will the Old Lady take their 34th title back to Turin? Well, I guess we’ll have to wait and see but it is going to be some ride between now and May, that is for sure.