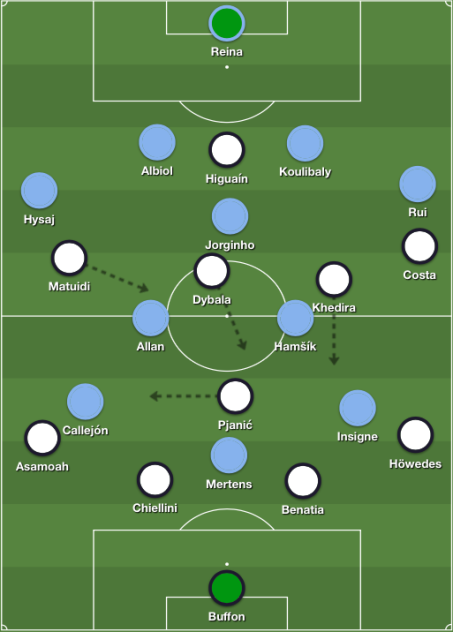 Having gained two points on title rivals Juventus during midweek, this was the showdown of the Serie A season. Four points separating them prior, the visitors could hardly afford not to win.

Napoli left it late, but the manner in which they managed to stifle Juventus, on home turf, too, illustrated just how exceptional they were on the night, bettering the Bianconeri both offensively and defensively.

There was no room for the likes of Mario Mandžukic, Stephan Lichtsteiner and Alex Sandro in this side, as Allegri opted for a side that could provide tactical versatility throughout, including the possibility of Benedikt Höwedes forming the third centre-back in a make-shift back-three (this proved to be slightly hampered by Chiellini’s first-half injury, however).

In spite of calls for Sarri to bring in the likes of Piotr Zieliński and Arkadiusz Milik, and potentially even move to a more pronounced 4-2-3-1 setup, Sarri stuck by his tried-and-tested setup, that featured the usual eleven (barring Faouzi Ghoulam, who was still out injured). 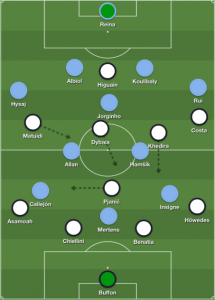 Sarri’s men set out of the traps with incredible pace and intensity, and it was important, too. They had to be in the faces of each Juve player and to suffocate play as high up the pitch as remotely possible, and they did so in fine style.

Despite being numerically overloaded in midfield by the consistent movements towards the ball from Sami Khedira, Paulo Dybala, and Blaise Matuidi, Napoli were still able to adjust to each new option with relative ease. 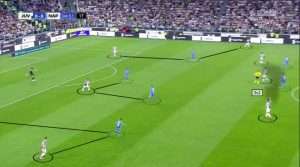 As can be seen above, there was an emphasis on using both Dries Mertens and Marek Hamšík to mark Miralem Pjanić out of the game whenever possible. Keeping these two ahead of the midfield line allowed for one to block off Pjanić and the other to either press the ball-holding centre-back, using their cover shadow, or for one to move to block off the passing lane into Juve’s attacking midfielders that were dropping deep to create an alternative option.

In the case of the wingers, José Callejón would often be the one to press the left-sided centre-back and try to narrow play to the far, right side. Similar to Lorenzo Insigne’s role, but it happened more prominently down Callejón’s side. 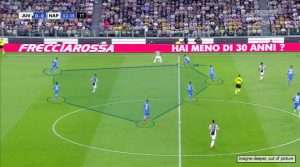 Here, Napoli create a 4-4-2 with Callejón and Mertens drawing closer to that side in order to completely squeeze the space, and cut off any other passing lanes, in order to dispossess Juventus. Not only were Napoli effectively tightening the spaces with which Juventus players operated in, but also the time in which they had to make decisions. 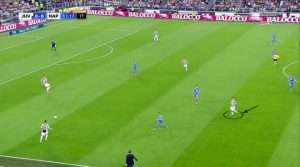 The aforementioned use of Mertens and Hamšík can been seen here, where Mertens is positioned to cover Pjanić and also press Höwedes, to then cut off the far side. Hamšík, meanwhilst, is allowed to move across and provide extra cover against Dybala’s movement towards the ball in his attempts to overload Napoli’s pressing structure.

Napoli’s Attempts to Play Out

Maurizio Sarri’s side often tried to utilise the spare full-backs on either side whenever they were forced back to Pepe Reina. The example below shows this, as the spare man created by Napoli’s last-line underload, meant the nearest Juve marker couldn’t afford to get too close to the full-back, otherwise it would open the space inside for the other option.

Napoli’s Use of Diagonal Runs

A key feature of Napoli’s play in the final third – aside from their usual wide rotations, that looked to open up the spaces in and around Juve’s block – was to use diagonal runs. 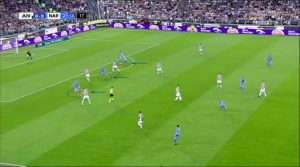 The most common trigger for this was whenever a deeper positioned player was afforded more time and space than usual. Subsequently, one of Callejón, Mertens or Hamšík, or even a mixture of the three, would look to run through the channels and latch onto an in-swinging pass ahead of their marker.

The best chance of the first half came through just this, with Mario Rui being afforded some time and space and Hamšík recognizing this.

With Dybala’s performance being fairly non-existent in the first half, Allegri opted to bring on Juan Cuadrado in his place at half-time, and ensure full width could be provided on both sides. In spite of his intentions, the change didn’t quite have the desired effect offensively, as Napoli held the ball well for large periods of the second half, but was a better player defensively, as Juve could move to a full-on flat 4-5-1, thus increasing their horizontal compactness. The final change was with Mario Mandžukic in place of Douglas Costa. Albeit taking away some of the natural width, the Croat had enough about him defensively to be a worthy substitution, as well as his ability to offer an out-ball from the back.

Sarri’s first change came slightly later, in the 60th minute, with Milik replacing Mertens, and not too soon after Zieliński and Marko Rog were also introduced, as Napoli pushed for a last-gasp winner to steal the points. And that’s just what they got.

As they have done so many times, Napoli created openings for the main target men on corners using decoy runners. This time, the smaller targets ran their markers back towards the goal, meanwhile, the centre-backs started from the far corner of the box, then using the space opened up in the centre, as well as their momentum, to tower over their marker and potentially win the aerial duel. Koulibaly was victorious from this corner, towering over his opponent and heading expertly into the bottom corner to claim the most crucial of wins. 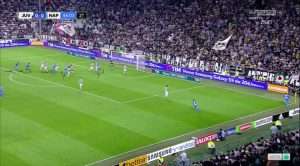 Juventus went out with a whimper in this game, for the most part. Completely contained by Napoli’s possession play and effective pressing, the closest they came to scoring was through a deflected free kick.

Napoli were contrastingly superb, taking all three points in this season’s Serie A title showdown, something that hasn’t been seen in Italy for a while now, and it might well have rejuvenated Napoli’s hopes of clinching a famous Scudetto victory. For once, it might just be Juventus who let it slip when it matters most.