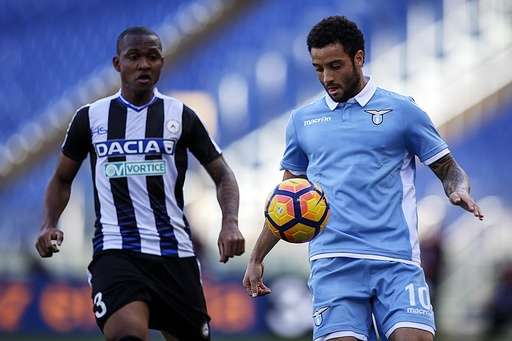 Third-placed Lazio will be looking to back-up their impressive 5-1 victory over Chievo Verona in the week when hosting Udinese at the Stadio Olimpico on Wednesday evening.

Le Aquile eased to a 5-1 win on the weekend as a Milinkovic-Savic double, as well as goals from Nani, Luis Alberto and Jacinto Quissanga handed them a comfortable three points.

The result meant they leapfrogged Inter Milan after a drew 1-1 with AS Roma later in the same evening, but are still 11 point adrift off league leaders Napoli.

It should be an intriguing encounter on Wednesday, with Udinese currently sitting in ninth place in the league table and they will be hoping to come away Rome with a shock result.

Simone Inzaghi will be hoping his side continue their good form, though, having gone six games unbeaten in Serie A – included back-to-back wins against Chievo and Spal in recent weeks, which has seen them become ruthless in front of goal, scoring a whopping 10 goals in two games.

They certainly have talented players amongst their ranks, who can punish sides, which they have shown throughout this season, which will give them a fantastic chance of securing Champions League football this season.

One of the players who has really stood out for the Biancocelesti this season is youngster Sergej Milinkovic-Savic, who has seven goals and two assists in the 19 league appearances he has made so far this season, which has made the 22 year-old a target for some of the biggest clubs in Europe.

The Serbian youngster is tremendous with the ball at his feet and seems to glide past players with ease, and is already a fan favorite amongst the Lazio faithful, and if they have a desire to play Champions League football next season, keeping a hold of Milinkovic-Savic could act as a key element.

Another player who has been in blistering form for Lazio this season is forward Ciro Immobile, who has been deadly in front of goal and is one of the main reasons the Eagles are where they are in the Serie A table – the former Torino man has a staggering 20 goals in 19 games this season, and also chipped in with a total of seven assists, but he limped off in the 5-1 win over Chievo, leaving Inzaghi to sweat on his diagnosis.

Udinese, on the other hand, have had a mixed set of results, such as drawing 1-1 at home to Spal as well as drawing away at Chievo in recent weeks, but also recorded a shock 3-1 win away at Inter Milan over the festive period – due to their inconsistency in Serie A this season, they have struggled to climb up the table and are sat in ninth overall.

Massimo Oddo’s side certainly have players who are capable of hurting teams, though. Czech Republic midfielder Antonin Barak has shown what a good player he can be this season, and has six goals and two assists to his name in 18 appearances, and he could be the biggest threat to Lazio’s backline when the two sides meet on Wednesday evening at the Stadio Olympico.

Egyptian defender Ali Adnan is also having a good season in a Udinese shirt and the 24-year-old is a real presence at the back for Oddo’s men, but he’ll need to be on his toes and ensure to keep his concentration throughout going up against the likes of Immobile and Luis Alberto.

There could be a lot of goals in this one, especially taking into account Lazio’s strike force and Udinese will have to be on their guard throughout if they want to pick up points on the road, but as we have seen this season in Serie A, anything can happen and it wouldn’t be a surprise to anyone if they did pick up positive points on the road Wednesday evening.

Inzaghi knows Lazio like the back of his hand. He has been involved within the youth setup in a managerial format from 2010, and was appointed manager in 2016. Since then, he has gone onto take Lazio to a new level – there is a real fluidity about their attack, and with the likes of Stefan De Vrij at the back, they have become more solid defensively, too. His managerial record currently stands at 44 wins from a possible 72, giving him a win percentage of 61.11% and he will be keen to improve on that when coming up against Udinese on Wednesday.

Former AC Milan full-back is another youthful manager and he took over the reins at Udinese in November 2017 following the sacking of Marco Baroni and he has settled reasonably well, with the little zebras now a more complete unit as a team, but it will be some ask for them to beat Lazio. The Inter Milan win proves how much this team has improved under Oddo though, make no mistake about that.