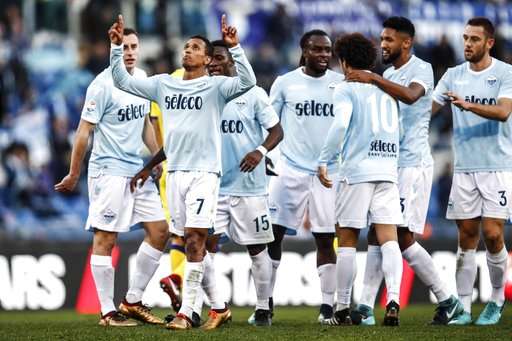 Lazio had a splendid few days from Sunday to Wednesday. Not only did they win both their matches (5-1 vs. Chievo and 3-0 vs. Udinese), they also leapfrogged Inter and Roma to go third before establishing their position when Roma drew at Sampdoria on Wednesday. Simone Inzaghi’s men have overcome a slight dip in form to look like Italy’s in-form team after the short winter-break and they are now the top scorers in the league.

On Sunday, Chievo gave them a tough afternoon until the last quarter of an hour when Lazio scored two quick goals to add the icing on a 3-1 lead. Luis Alberto had given the Biancocelesti the lead but Manuel Pucciarelli leveled the score shortly thereafter. The majestic Sergej Milinkovic-Savic then restored Lazio’s lead before scoring a second-half volley to give them a two-goal cushion. Substitute Nani first assisted Bastos for Lazio’s fourth and then thundered a strike in himself to make it 5-1 and give Lazio a win that perhaps was bigger than the match warranted. Still, it shows the quality Lazio have in attack that they added goals to make a tough game look like an easy one. The win and the draw between Inter and Roma saw Lazio climb into third on Sunday night with a game in hand on the Nerazzurri. The only negative was Ciro Immobile’s injury.

On Wednesday night they reaffirmed their potential to qualify for the Champions League with a 3-0 win against Udinese at the Olimpico. With the league’s top goalscorer injured, Inzaghi decided on a fluid front-two of Nani and Felipe Anderson. The duo scored a goal each after Samir’s own-goal in the first half had given Lazio the lead. Another game, another win and another bunch of goals scored. Lazio have now scored 56 goals, six more than Juventus, lie third in the league and have 46 points, three more than Inter in fourth and five more than Roma in fifth. Their performances are the result of a brilliantly run club where the Sporting Director Igli Tare continues to identify cheap bargains in the transfer market and the coach Inzaghi incorporates the players on the pitch into a ruthlessly efficient side. It’s really impressive to watch how he deals with both players leaving and injuries, which speaks of a well-gathered squad with quality players and a coach who clearly excels at delivering his message to every single player in his squad.

Napoli had struggled against Atalanta recently, losing three of their four last meetings. They were given a tough test in Bergamo too but passed with flying colours courtesy of a Dries Mertens goal in the second half. Maurizio Sarri’s men continue to keep the pace at the top and we are in for a fascinating title race between two great coaches and teams.

That is because Juventus continue to win as well, although they might have hoped for a bigger margin at home to Genoa. 1-0 was enough to secure the three points though and the goal by Douglas Costa keeps Juve’s impressive form going.

Simone Verdi turned down a move to Napoli over the break to keep his status as the main man at Bologna, and he truly delivered on that against Benevento when he assisted all three goals in Bologna’s 3-0 win. Verdi is a fantastic player to watch, and Bologna are lucky he decided to stay at the club. The goals were scored by Mattia Destro, Sebastien De Maio, and Blerim Dzemaili.

Walter Mazzarri’s Torino revolution halted a bit at Sassuolo despite Joel Obi’s early opener for the visitors. Domenico Berardi came to life with one of the goals of the week to earn the Neroverdi a vital point at the bottom. Still, Mazzarri is undefeated so far and looks to have improved Torino’s defense already.

Inter and Roma have both lost form recently and were both disappointed after their clash at San Siro. The 1-1 draw meant Lazio overtook both in the league and Roma’s subsequent draw at Sampdoria means they managed to survive two difficult away matches without losing but also ended up five points behind Lazio. At San Siro, Roma took the lead through Stephan El Shaarawy after dominating the first half but Inter came back strongly towards the end and Matias Vecino equalized. At Samp, Fabio Quagliarella continued his superb form with a penalty to give Samp the lead but Roma equalized in stoppage time through a goal by Edin Dzeko. Both Inter and Roma need to find a winning run quickly if not to risk their spot in the top four.

Milan have come alive recently and won away at Cagliari after Franck Kessie scored twice to overturn the lead Nicolo Barella had given the home side. Both Barella and Ricardo Rodriguez were later sent off in a tough battle between two good teams, but the win was vital for Milan who look likely to secure a Europa League spot if this run continues.

Crotone secured a vital win at the bottom when beating Verona 3-0 at the Bentegodi. Andrea Barberis gave the visitors the lead in the third minute and Adrian Stoian and Federico Ricci added to the lead in the second half. Walter Zenga’s side are currently enjoying good form and are hopeful to prolong their stay in the top flight. If they perform like this, they surely will.

Sampdoria crushed Fiorentina at Luigi Ferrari’s after Fabio Quagliarella’s hat-trick. Carlos Sanchez pulled one back late on but it was never any question about where the points would end up. Sampdoria were well superior and continue their strong season. On Wednesday they came within minutes of beating Roma where Quagliarella scored again. He’s having his best ever season in terms of goalscoring, and we’re only 21 games into the campaign!

Udinese have impressed under Massimo Oddo but were disappointed to only draw at home to SPAL. Samir gave the home side the lead but Sergio Floccari leveled the score in the second half to give SPAL an important point. In truth though, they have to start turning draws into wins to stay up as they are now down in the bottom three.

Quagliarella scored a hat-trick at the weekend to beat Fiorentina and then added another against Roma to take his tally for the season to 16, his personal best. And he’s only played 21 games. The veteran turns 35 next week but shows no signs of dropping off in terms of quality.

Inzaghi’s men earned two big wins this week and have established themselves as the league’s top scorers and are in third position. They play great football, scores goals and gets results, now even without the top scorer Immobile. Can they snatch a Champions League place?

Ricci’s goal at Verona was beautiful. From the moment it left his boot you could already see where it was going. Stunning.