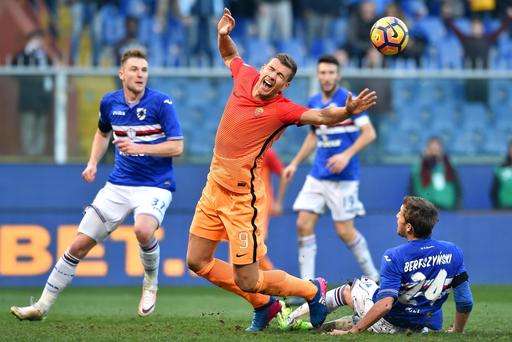 Samp will be hoping to pick up on their staggering form in this year’s Serie A when taking on Eusebio Di Francesco’s side, but it won’t be an easy task by any means, especially with Roma’s ambitions of playing European football next season again.

They’re certainly a side with a lot of talent but have struggled to really steam on when picking up wins this season but will hope to record back-to-back wins on Wednesday following their 3-1 win over Fiorentina last time out as Fabio Quagirella’s hat-trick handed Marco Giampaolo’s side all three points at the Luigi Ferraris on the weekend.

Roma themselves will want to get back on track but they did get a valuable point on the road last time out as Stephan El Shaarawy’s early goal for Di Francesco’s side was canceled out as Inter struck late on through Matias Vecino to secure a point.

The draw with Inter did mean that Roma have now gone six games in all competitions without a win and it must be a concern to Di Francesco, especially as they aim to secure a top-four finish.

The home crowd will hope to lift I Blucerchiati in this encounter, but the visitors have won three of the past four meetings between the two sides so they will come into this one as slight favorites ahead of Wednesday’s night game in Sampdoria.

The experienced 34-year-old has been in a rich vein of form this season and has hit the back of the net on 15 occasions already this season for La Samp. The former Juventus man also has five assists to his name, proving his worth and ruthlessness in front of goal throughout this season – his aerial ability makes him a nightmare to mark or play against, and his goals have played a key part in why Sampdoria are currently sitting in the top half of the Serie A table currently.

El Shaarawy scored in Roma’s previous outing as they drew 1-1 away at Inter Milan at the San Siro, and he can be a real threat in an attacking sense.

He has tremendous pace and dribbling, and he will cause problems for the Sampdoria back-line, for sure. The 25-year-old also has five goals and four assists to his name and he will be keen to add to that against Giampaolo’s side on Wednesday.

Giampaolo took charge of Sampdoria in 2016, succeeding Vicenzo Montella on a two-year contract and has steadied the ship. Samp find themselves in a great position this season, competing for European competition.

Di Francesco took over last summer and has gone onto win 15 of his 27 games in charge, giving him a win percentage of 55.56%. His coaching methods makes his side’s look attractive to watch, and they’ll aim for securing European football.