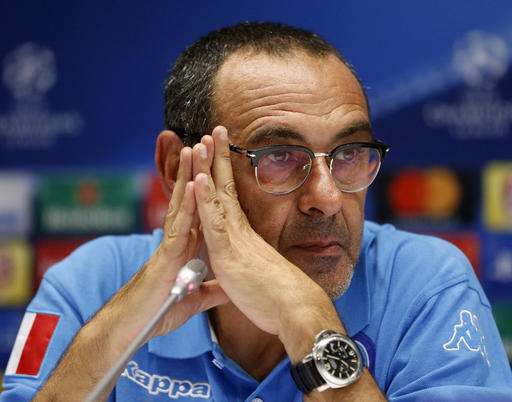 Most of the major European leagues have ended their seasons, and the few that remain ongoing are all wrapped up in terms of title winners. The World Cup is around the corner, and right on the heels of that are big transfers and a new season starting.

If you are a fan of Chelsea, it seems that, with Antonio Conte having one proverbial foot out the door, one of your summer transfer targets could be a new manager. That manager has been rumoured to be current Napoli boss, Maurizio Sarri.

Who is Maurizio Sarri?

Maurizio Sarri, born in Naples in 1959, was not a professional footballer, nor was he a career football manager. Mr. Sarri was a man of finance, working for Banca Monte dei Paschi di Siena until he was aged 40. In 1999, he left the banking world, managing amateur teams around Florence for five years, most notably Sansovino and Sangiovannese. He then took a huge bump up to managing Serie B sides. After a bit of back and forth, Sarri arrived at Empoli in 2012. Sarri, in his three seasons at Empoli, got them promoted for the first time in nine years, and had them overachieve in Serie A for a 15th placed finish, which led him to his current job at Napoli.

Sarri has been at the helm in Naples for three seasons, in which the Partenopei have finished 2nd, 3rd, and 2nd, respectively. He has also set single-season points records in back-to-back seasons. For a third consecutive season, Sarri has secured Champions’ League football for Napoli, a first time in club history.

How do Sarri’s sides play?

Sarri has received many plaudits for his aesthetically beautiful style of football. After some tinkering with a 4-3-1-2, he settled at Napoli with a 4-3-3 formation. This allowed Sarri to promote fluidity and the use of tight passing triangles, not too dissimilar from a certain Premier League manager who we will quote in a second.

Defensively, Sarri prides himself on coaching a very high pressing side, as well as a team that plays with an aggressive defensive line, forcing the opposition to often make mistakes, allowing his team to regain possession at the earliest opportunity. With the ball at their feet, Sarri’s players are demanded to perform in a very particular way. One touch football, high possession, fluidity, and blistering pass statistics are all features of Sarri’s style. Pep Guardiola, after playing Napoli in this season’s Champions’ League, had this to say:

As far as statistics are concerned, Napoli currently rank 2nd in successful passes in Europe’s top leagues, completing 14,950/16,977 (88%) of them, with currently only Manchester City ranking higher in that respect. Napoli also top Serie A in ball possession (60.1%).

What Could Sarri offer Chelsea?

After two seasons with fellow Italian, Antonio Conte, one of which saw Chelsea lift their sixth league title, it seems that the club is about to send him on his way. Sarri, aside from a fresh face, would offer a more exciting brand of football.

It could also see him elevate the form of some of Chelsea’s current players. It is hard to imagine a player like Eden Hazard not loving to work with a winger-reliant manager like Sarri. He would also likely take Chelsea’s full-backs to the next level, the playing position where historically Sarri’s charges have seen the most personal growth throughout his career under his stewardship. He has done a wonderful job with Faouzi Ghoulam, getting him recognition as one of Europe’s top left-backs, before his injury this season.

What are Sarri’s flaws?

A Lack of Squad Rotation – Napoli, in two of the last three seasons, have suffered from late-season burnout, and lack of rotation has been the major cause. At this season’s end, Napoli will have 11 players who have clocked up over 2,000 league minutes played, and six players with over 3,000 minutes played. By contrast, league champions Juventus will have zero players with 3,000 minutes under their belt. Furthermore, this has hurt the development of some of Napoli’s younger budding players like Amadou Diawara and Marko Rog.

Lack of tactical flexibility – Sarri, as beautiful as his set-up is, can let his stubbornness get the best of him. At Napoli, he has been married to the 4-3-3, even if opposing coaches have set up perfectly against it. Sometimes, this causes Sarri’s sides to become a bit stagnant, and sometimes with a feeling of just going through the motions, without creating consistently dangerous goal-scoring opportunities.

Mentality – Especially this season at Napoli, Sarri has often boasted a “happy to be here” type of attitude. Yet, there have been also moments when Sarri has complained persistently about superficial circumstances such as kick-off times – charismatic and unpredictable, it will be difficult for any board to ever have full control over the manager.

How would a Sarri led Chelsea side line-up?

As mentioned earlier, Sarri toyed with this formation early in his Napoli career:

This side is the more realistic in terms of what to expect from Sarri, maybe Victor Moses aside, but there are several pertinent reasons why this formation would work.

In attack, Chelsea would be offered some defensive cover with Moses, and will make Hazard the focal point on Sarri’s left-side leaning system.