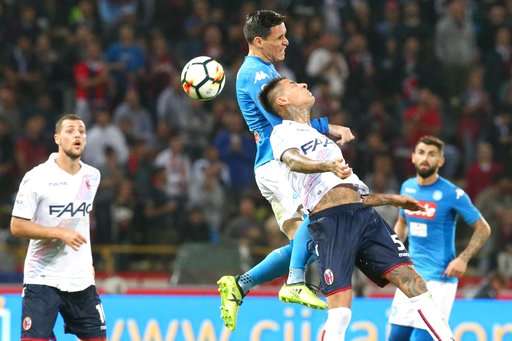 Leaders Napoli host Bologna at home in the hope of maintaining their lead at the top of the Serie A table on Sunday afternoon.

Gli Azzurri have been in scintillating form this season and are deservingly at the top of the Serie A table.

Maurizio Sarri has adopted a style which makes his sides so hard to break down and beat this season, and the flow and swagger they have going forward hasn’t been matched by anyone in the league this season.

They have players in Marek Hamsik, Lorenzo Insigne, and Dries Mertens who have all been sensational this season and they have seemed to get better with every game in which they have played in – Mertens, in particular, has flourished under Maurizio Sarri.

The Belgian international has scored a total of 11 goals and assisted on six occasions this season. The30-year-oldd also scored in their previous encounter as they defeated Atalanta 1-0 away from home to ensure they remained at the top of the Serie A table.

Bologna have a horrendous record against the Partenopei, and Sarri’s side will be confident of three points, having scored a staggering 20 goals in four games against Sunday’s visitors, including a 7-1 away win and a 6-0 home win.

The visitors have endured some mixed form heading into Sunday’s encounter, having losing two and winning two their last four games. Roberto Donadoni’s side did earn three points last weekend, though, as they eased to a 3-0 win over relegation-threatened Benevento.

Napoli will be expected to pick up three points come Sunday, so Bologna will be hoping to conjure up a shock to stifle the Gil Azzurri’s title bid.

What’s there not to like about Sarri? He has taken Napoli to a new level this season and they’re seemingly unstoppable going forward. Since taking over the reins in 2015, he has gradually improved Gli Azzurri and it looks as though he could finally win the Scudetto in Naples. It will be some challenge, but it is certainly possible.

Donadoni is certainly an experienced manager, but he has struggled since he was appointed Bologna manager in 2015, winning only 30 of his 90 games in charge. He will be keen to get one over on his former club, especially taking into account that it has been nine years since he was sacked by Napoli come Sunday afternoon’s encounter.

Bolonga have no injuries to report and should have a fully fit squad ahead of Sunday’s match-up in Naples.

Napoli’s Victor Osimhen transfer to be investigated in...